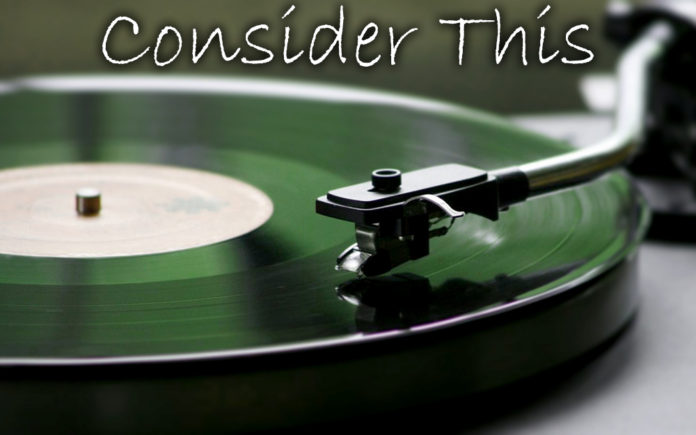 I’ve been a record nerd since my mother bought me my “Chipmunks Sing The Beatles” record back in 1967. I have probably been making lists like this since I was a teenager, always operating on the arrogant assumption that the world would be fascinated by my favorite music of any given year. So here are my jams for 2018.

Elvis Costello has been my spiritual boyfriend since I received a Police Regatta de Blanc cassette on my 17th birthday and exchanged it at Gemco (I already had it), for Elvis’ new Get Happy album. In the 41 years since his 1977 debut he has added a tackled a plethora of musical genres. Characterized an angry young Punk at the beginning, he is now considered an erudite elder stateman of Rock. Look Now is his 29th studio album and his first in 10 years with his stalwart backing band, The Imposters.

This new album recalls Imperial Bedroom, his Baroque masterpiece from 1982, as well as Painted From Memory, his 1998 collaboration with Burt Bacharach. Even as the musical settings are lush and sophisticated, Elvis’ lyrics never lose their caustic bite. Deep, dark and richly nuanced, it’s a brilliant effort that reveals something new with each listen.

Jimmer Podrasky and Syd Straw have both been working musicians for more than 30 years. He gained notoriety fronting the proto-alt.country (Americana, whatever) band the Rave-Ups. She is a sui generis song stylist that has recorded three pluperfect solo albums, and guested on records by Dave Alvin, Rickie Lee Jones, Los Lobos, Richard Thompson and Wilco, just to name a few. Jimmer asked Syd to sing a duet with him on his 2017 album, God Like Sun, that seemed to open the door to a broader collaboration. Shoulder… arrived this summer, a sublime six song set that spotlighted their nonpareil vocal blend. Something of a 21st century Sonny & Cher, this musical odd couple have created something special here. Hopefully it’s only the beginning.

I pride myself on knowing about music, but Luther Russell somehow slipped under my radar. Turns out he’s been making music in my Hollywood hometown since he was a teenager in the late ‘80s. Originally from California’s central coast, his grandparents and Great Uncle were fairly famous songwriters, so music seemed like a natural career path.

This sprawling, two CD set (one day my musical prayers will be answered and a label will put it all on vinyl), runs the gamut. It features songs from his first band, the Bootheels, which featured Jakob Dylan and Tobi Miller, and his most lasting band the Freewheelers, to Federale, his short-lived partnership with Black Crowes guitarist Marc Ford. Much of the music is previously unreleased and reflect a plethora of influences. Smart yet shambolic, his music can be favorably compared to predecessors like Arthur Lee of Love, Harry Nilsson, Bob Dylan, Isaac Hayes (seriously) and contemporaries like Ryan Adams, the late Elliott Smith and Jeff Tweedy. This is the perfect introduction to a brilliant artist.

the innocence mission “Sun On The Square” (Badman Records)

The innocence mission’s self-titled debut was released nearly 30 years ago, during a kinder, gentler era. Even though the world has currently turned divisive and hostile, the band (originally a four-piece, currently a trio), still operates under the assumption that most sentient humans view the world with a modicum of optimism. Their sound has always been hushed and contemplative and that continues on Sun… their 12th long-player. Conjuring up rainy days and snowy lakes and the simple pleasures of watching the leaves change in autumn, their music is spiritual but never preachy, Ephemeral and ethereal. A soothing balm for these uncertain times.

John Brodeur has been a solo artist for nearly two decades, his albums have garnered favorable comparisons to Todd Rundgren and Robyn Hitchcock. Adopting the band name Bird Streets, the New York native enlisted his West Coast pal, multi-instrumentalist/producer (and a talented singer-songwriter in his own right), Jason Falkner. The result is this impeccable debut. Sunshiny melodies collide with ornate instrumentation and trenchant wordplay. Bird Streets charts an exciting new course in John’s musical journey.

Successful second acts are a rare commodity in Rock N’ Roll. When the Black Crowes imploded in 2015 and brothers Chris and Rich Robinson went their separate ways, no one could have predicted that Rich would rebound and form The Magpie Salute. During the Black Crowes nearly quarter century run, Chris was the peacock-y front man and Rich was the workhorse guitarist, following their acrimonious split, Rich hit the ground running. He assembled a crack cadre of players including ex-Black Crowe lead guitarist, Marc Ford, soulful vocalist John Hogg, bassist Sven Pipien, drummer Joe Magistro and Matt Slocum on keys.

The six-piece road tested their sound before heading into the studio. Alternately economical, extravagant and elegiac, each song offers up a different color in their sonic palette. Thoughtful, socially conscious lyrics are buttressed by crackling arrangements and crisp instrumentation. It’s a dazzling distillation of a combo-platter of influences that remains wholly original.

About 25 years ago I spent a frigid New Year’s weekend with a friend at her friend’s apartment in San Francisco. A voluble Irish woman was among the mix of friends I didn’t know and she wouldn’t shut up, spewing opinions on a variety of topics. Apropos of nothing, she announced in her clipped Irish brogue; “Kate Bush, Leonard Cohen, Tom Waits, fucking brilliant.”

I didn’t disagree, but I would rarely use those two words to describe anyone. Unless it’s Elvis Costello, or Chris Price. The son of a Grammy winning producer, he grew up living above a recording studio in Miami Beach. Musical practically from birth, he began playing as a kid and hasn’t slowed down.

He landed in L.A. about 12 years ago and quickly found work playing in bands and producing legacy artists like Linda Perhacs and Emitt Rhodes. He quietly self-released his solo debut in 2012. Even as he was concentrating on production, Chris managed to amass about 30 new songs of his own. Cherry-picking 14, he signed with Omnivore Recordings, and his second record, Stop Talking arrived in 2017.  A subtle synthesis of his various myriad inspirations, it ended up on several influential Top 10 lists. A year later he returned with Dalmatian. Although the songs were technically outtakes from the Stop Talking sessions, this was no odds n’ sods collection. Alternately witty, sincere and soulful lyrics unspool atop stacked harmonies, Jangly guitars and Pop-tastic, panoramic melodies. Brilliant doesn’t begin to describe how exceptional Dalmatian is.

These two! This collaboration should have happened decades ago. Dave Alvin and his brother Phil first gained notoriety fronting their powerful Roots Rock combo, the Blasters. The five-piece added a Bluesy authenticity to L.A.’s thriving Punk scene. A decade older than Dave, Jimmie Dale grew up in the Texas Panhandle, he first attracted attention as part of the The Flatlanders, a seminal Americana trio that included fellow Texas troubadours Joe Ely and Butch Hancock. Dave has been a solo artist since the late ‘80s, as has Jimmie Dale, naturally their paths crossed and the pair became pals.

This partnership feels relaxed and natural. Dave’s rumbling baritone dovetails with perfectly Jimmie Dale’s Lonestar twang. The duo tackle Alvin originals as well as classic cuts that are an organic blend of Blues, Folk, Country and Rock. Recently, they tore the roof off Pappy & Harriet’s.

Although Madeleine has been around for about 22 years, she has only recorded eight albums. That’s okay, she takes her time and waits for inspiration to strike. She went eight years between her 1996 debut and her sophomore effort, 2004’s Careless Love. That was a bona fide hit, both critically and commercially. Over the next decade she released five more albums, each an artful mix of telling covers and sharp original songs. An old soul, her supple vocal style recall antecedents like Billie Holiday and Edith Piaf.

On Anthem, Madeleine co-wrote nearly every track with longtime producer Larry Klein and acclaimed singer-songwriter David Baerwald. The catalyst for this album was the 2016 election. Even as the Country is torn apart by divisive tribalism, the socially conscious lyrics never wallow in the sturm und drang. By turns, playful, soulful and breezy, the melodies are a sharp fusion of Folk, Jazz and Country. Political angst has never been so irresistible.

This North Carolina native and L.A. transplant specializes in creating ornate and complex music best experienced through a Fancy set of headphones. The 44-year-old singer-songwriter is an in-demand producer and sideman, he has spent several years as the guitarist in Roger Waters’ touring band. In between those commitments he managed to write and record his third solo album. Rare Birds is a kaleidoscopic song cycle that split the difference between rococo Psychedelia and homespun Country-Folk. If Pink Floyd and Neil Young ever made an album, it might sound like this. It’s heartfelt and smartass, a magic carpet ride of a record.

I generally try and confine my choices to new material, typically excluding reissues, live albums and compilations, (although technically, Luther Russell’s album falls into that latter category. But occasionally, rules are made to be broken, and he’s my new musical crush, so suck it). But if I were so inclined, David Bowie’s Glastonbury set, as well and career-defining retrospectives from (the late great) Maggie Roche and Permanent Green Light, plus Steve Wynn’s recently reissued solo albums would have made the cut.

Sadly, a Top 10 is limited to only 10 albums. I know some fellow music geeks who stretch their 10 to 20. If I were to adopt that Sort of lassiez faire attitude, I might feel compelled to include amazing albums from Jeffrey Gaines, Rosanne Cash, Ray Lamontagne and Lenny Kravitz…but I remain a disciplined Bitch Goddess.