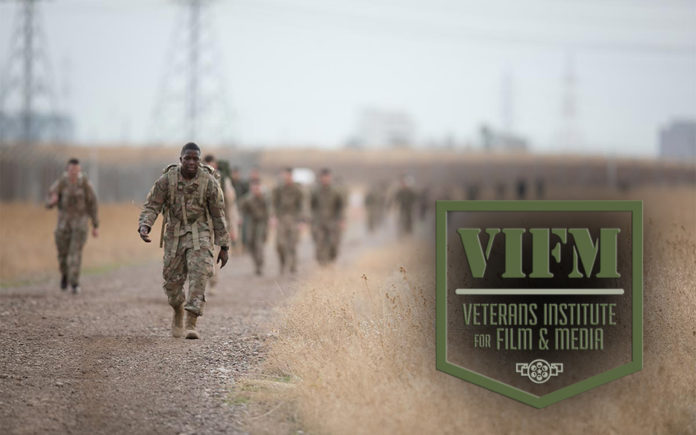 Filmmaker Johnathan Brownlee was inspired by the hard work of a first assistant director on his film set.  He admired his team effort, work ethic and discipline to get the job done.  When Brownlee inquired about his background, the first AD said he was ex-military – Marine Corp — and his crew was made of men and women who were Navy, Air Force and Army veterans.

With a passion for filmmaking, Brownlee was inspired to create the Veterans Institute for Film & Media (VIFM).  As CEO & President of the Dallas Film Society and Executive Director of the Dallas International Film Festival, he recognized an opportunity to help veterans transition into the film and media business.

Living part time in Joshua Tree near the 29 Palms Marine base, Brownlee has met many military and ex-military families which furthered his mission to get these skilled and competent individuals into the film business.

Launched in 2017, Brownlee formed the non-profit 501(c)3 to provide free film educational programs to veterans.  He developed the curriculum and brought in people to teach the courses.

“VIFM is a film and media training ground for military veterans.  I didn’t serve in the military, but this gives me the opportunity to serve in another way,” said Brownlee.  “Ex-military have team ethos and are mission oriented, which translates perfectly to a film set.”

“Film Basic Training” is comprised of three phases: Classroom Education, Paid Internship and Job Placement.  The VIFM is only available in Texas.

“I bring in my professional crew to teach the classes,” said Brownlee.  “Once you give the veterans the language and the tools, it really works great.  Graduates have worked on “Standoff at Sparrow Creek” (showing in the PSIFF) and our other films.”

The program pays students up to 80 hours to work on sets and to be a part of the crew.  Students are limited to ten or 12 per session.

The VIFM is part of the Dallas Film Society’s Education Initiative of which Brownlee serves as Executive Director.

“It’s been wonderful to have the opportunity to work with veterans.  I like to think that we are developing the seventh branch of the military. The goal is for us to have an available production crew that is veteran based wherever we film.  So anyone in film or media can go to the VIFM and know they are getting a well-trained and disciplined crew.”

Brownlee has been accused of recruiting veterans just to serve on his film sets.  His answer:

“Yes, you bet I want to work with veterans,” said Brownlee.  “They get the idea.  They listen and follow directions.  They anticipate what needs to happen and they don’t hesitate to get in there to get the job done.  They work as a team and that’s what it takes to get a movie made.”

Brownlee is looking to get more Marines into the program.  With military bases in Southern California and in close proximity to Palm Springs and Los Angeles, veterans could easily find work.  He hopes to eventually develop the VIFM into a national program.

“The VIFM is a great way for film festivals to connect with their veteran communities and grow their production base,” said Brownlee.

Forty students will go through the VIFM program this year in Texas.  Brownlee intends to increase that number.   The next “Basic Training” begins May 6, 2019.  Applications are available online.

For more information, to apply or donate visit www.vifm.us