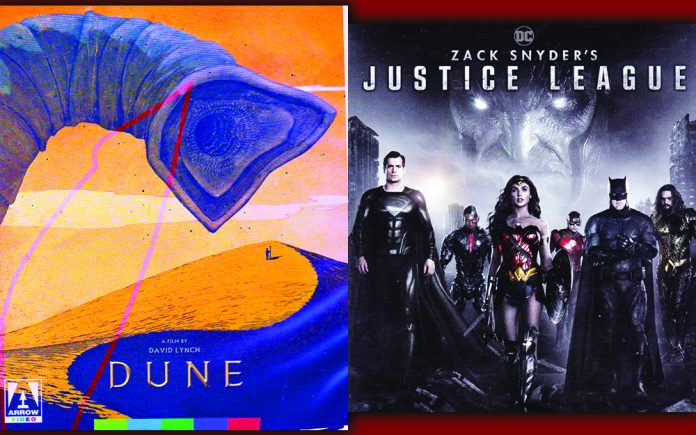 Mega producer Dino De Laurentis bought the film rights to Fran Herbrrt’s seminal sci-fi novel in 1976 and hired the author to write the screenplay.  When Herbert turned in a 175-page draft which would have run for about three hours, De Laurentis made a deal with Ridley Scott  who was widely praised for his success with Alie, to rewrite the script and direct the movie.  Scott’s plan was to divide the film into two movies – much like Denis Villenuee has done with his hugely anticipated upcoming version.

Lynch had been offered the opportunity to direct 1983’s Return of the Jedi  but agreed to write and direct Dune.  Principal photography began in March 1983 with a 135 page script on 80 sets and 16 sound stages with an international cast and crew of 1,700.

The movie was released to American cinemas in December1984 and was reviled by most critics.  Roger Ebert said : “It’s a real mess, an incomprehensible, ugly, unstructured, pointless excursion into the murkier realms  of on of the of one of the most confusing screenplays of all time.”

Amazingly, early audiences were handed a pamphlet containing a handy dictionary of Dune terminology.  Sadly, the movie did not make back its $40 million budget and plans for a seuel were scrapped.

That said, it must be noted that as an example of cinematic craftsmanship and world building, the movie is breathtaking.  When Lynch was first approached to direct, he said he had not even heard of Herbert’s book let alone read it.

Following a notorious aborted attempt by Alejandro Judorowsky in the 1970s, Herbert’s  huge best-selling sci-fi epic made it to the big screen as the third film by then emerging surrealist wunderkind Lynch, featuring an all-star cast including several of Lynch’s regular collaborators.

The year is 10. 191, and four planets are engaged in a secret plot to take control of the Spice Melange, the most precious substance in the known – and unknown – universe (so far) found only on the planet Arrakis.

A feud between two powerful dynasties – namely, the house of Atreides and the House of Harkonnen – is manipulated from  afar by ruling powers that conspire to retain their grip on the spice.

As the two families clash on Arrakis, Duke Atreideides’ son Paul (Kyle MacLachlan), in his first screen role) finds himself the center of an intergalactic war and an ancient prophecy that could change the galaxy forever!

Though it’s initially cool reception ensured that Lynch mostly  removed himself from mainstream filmmaking for the rest of his career, Dune has since been rightly re-evaluated as one of the most startlingly original and truly visionary science fiction films of the 1980s.

The movie’s astonishing production design and visual effects can now be appreciated anew in this eye-popping and 4K restoration with generous and comprehensive hours-long bonus features too voluminous to list here.

Enter a world beyond your dreams.  A film beyond your imagination.  ARROW. MVD/visual.  4K/Blu-ray

After a long and sustained wave of fan support, Zach Snyder’s original cut of Justice League can be fully appreciated on the home theater screen in a stunning 4K transfer.

Determined to ensure Superman’s (Henry Cavill) ultimate sacrifice was not in vain, Bruce Wayne (Ben Affleck) aligns forces with Diana Prince (Gal Gadot) with plans to recruit a team of metahumans to protect the world from an approaching threat of catastrophic proportions.

The task proves far more difficult than Bruce imagined, as each of the recruits must face the demons of their own pasts to transcend that which has held them back, allowing them to come together, finally forming an unprecedented league of heroes.

Now united, Batman, Wonder Woman, Aquaman (Jason Momoa), Cyborg (Ray Fisher) and The Flash (Ezra Miller) may be too late to save the planet from Steppenwolf, DeSaad and Darkseid and their deadly intentions. 4K/Blu-ray.  Warner Bros.