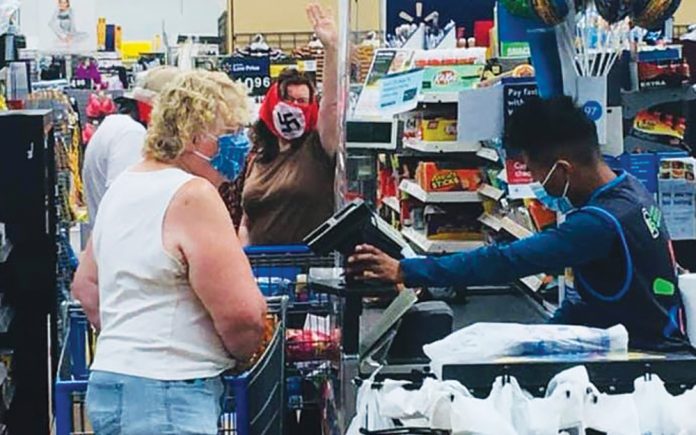 The acronym USA is most often thought of as United States of America.  USA also refers to the US Army, USA Network, US Attorney, United Soccer Association and the medical condition UnStable Angina aka USA to heart doctors to name a few.

I want to add one more to the list USAs – Unruly Spoiled Americans.

You and I have both seen it at the stores that we visit or the conversations that we have with friends and family members.  While many try to pin the blame to the civil discord on the actions of the left or right ends of the political spectrum, we all know people with no political leanings who regularly act in  manners destructive to their future interests.

My first example happened in Marshall, Minnesota on Saturday, July 25th when a couple was banned from Walmart for at least the next year.  Why?  They were wearing masks adorned with Nazi swastikas in protest to the Nazi-like demands associated with wearing a face mask in public.  The wife was caught on camera, shouting “If you vote for Biden, you are going to be living in Nazi Germany. That is what it is going to be like.” Off camera, another shopper punched the 61 year-old male half of the swastika-wearing couple in the face.

Only two days earlier, Ash O’Brien and Jarret Kelley were having lunch at the Rhodes Dog Park in San Diego.  Reports do not mention whether they were there with a dog or but let’s assume that they had one.  While minding their own business in a socially distant way, an irate woman accosted them for not wearing their masks in public while eating.  She proceeded to mace the couple before the police arrived and arrested her.

In late April when Americans were glued to their televisions in search of guidance and solutions to the pandemic, Bill Bryan of the Department of Homeland Security discussed research on the virus and ways that the virus might be stopped.  President Trump spoke up and spit-balled potential areas for research.  Somehow, more than a few folks misconstrued his words and ingested household cleaners like Lysol and Clorox as either some preventative treatment or a possible cure.  Enough cases were reported to health authorities that the maker of Lysol had to issue a strong statement that made it clear that their cleaning product should not be ingested.

While these examples reflect an amazingly ignorant segment of society, the more concerning folks are those who helped to incite riots and the destruction of business and personal property.  Whether referring to Antifa, Neo-Fascists or another anarchical group, elements of both political parties are using this moment of weakness as a chance to divide our country for their less than patriotic intents.

Where much of the world got a handle on the virus by banding together as a nation to defeat the virus, we chose to politicize.  Civic leaders used this crisis as an opportunity to advance agendas at the expense of the physical, mental and economic health.  Leadership on both sides of the political spectrum did little to quell the extreme elements in their own party.  Each party chose to name call and behave in manners once thought inexcusable at the dinner table, let alone a leadership position running the largest economy in the world.

Meanwhile, cable news networks like MSNBC, CNN and Fox selectively share the facts with their viewers in a manner that helps ratings while fanning the flames of civil discord and division.

As a country, we will need to find a thread that may once again unite us.  At present, that seems like an unrealistic pipe dream. By behaving in such selfish and partisan ways, we are insuring a poorer future for our nation and our children.

Haddon Libby can be reached at Hlibby@WinslowDrake.com.