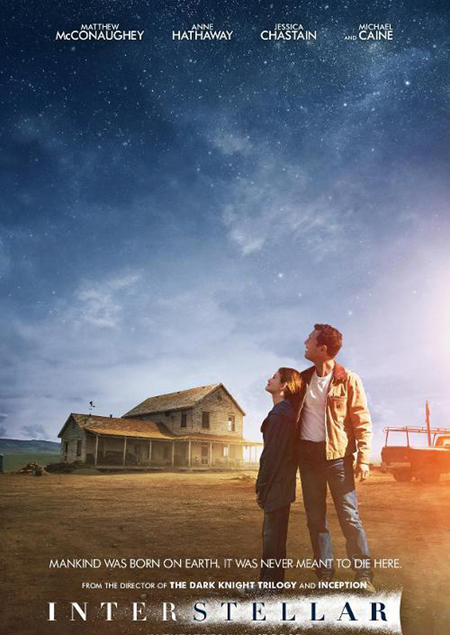 The most anticipated movie of the year propels the audience into a visually dazzling and thrilling journey that challenges the mind and touches the heart. Co-writer and director Christopher Nolan already has an astonishing track record with his stunning films (THE PRESTIGE, INCEPTION, BATMAN TRILOGY) that have placed him firmly in the exclusive billion-dollar club of box office returns. With INTERSTELLAR, Nolan, intentionally or not, takes Joseph Campbell’s notions of a hero’s journey to its extreme outer limits — literally. Matthew McConaughey is former astronaut Coop, a father who lives on our dying planet in the not so distant future. Since our global environmental collapse is beyond repair, we resuscitate our long dormant space program in the hopes that a wormhole near Saturn can be used to discover a way to salvage human life. Coop leads the desperate mission into the unknown along with specialists Anne Hathaway and Jessica Chastain. Yes, they make an unusually good-looking trio of space explorers.

Without spoiling the thrill of experiencing this wondrous film on the largest screen in the neighborhood, just know that the truly incredible visceral thrills are matched by the regularly inserted mind-bending science of cutting edge cosmology. Michael Caine is the onscreen avatar of Caltech professor, science advisor (and executive producer) Kip Thorne. 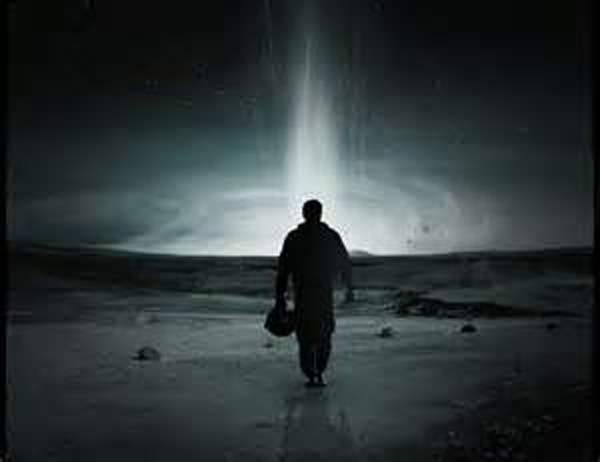 The science, even though it remains obtuse and weirdly irrational, is as compelling as the otherworldly trip. But the heart of the film is the emotionally authentic relationship between McConaughey and his daughter. Will he ever see his daughter again? Or will it be decades in the future if he returns?

I resist detailing the movie story here because the telling dilutes the rare pleasure of this remarkable film that taps into our real concerns about the future of human life on earth. Along the way, it posits the necessity of maintaining our currently cash-strapped “space program” that to many seems irrelevant to real-life earthly matters.

Don’t miss this extraordinary film. It is not only a showcase of cutting edge cinematic craftsmanship but also a story that mirrors the best of our human spirit on the increasingly small, troubled planet we call home. Highest recommendation. Now showing at Cinemas Palm d’Or. 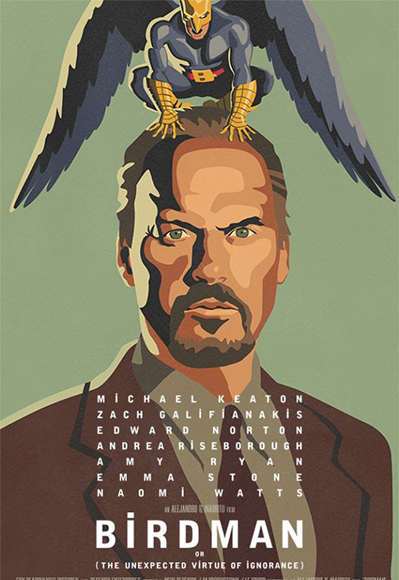 BIRDMAN
The full title of BIRDMAN adds the additional line: or, THE UNEXPECTED VIRTUE OF IGNORANCE. I must admit, I have no idea how that alternate title informs this ambitious, provocative movie. Maybe it’s merely a replay of the “Ignorance is bliss” cliché — which is also kind of baffling as it relates to this engaging but challenging black comedy that almost demands (and improves) with multiple viewings (not a bad thing in this case). Director Alejandro González Iñárritu’s story of Riggan (Michael Keaton), a once famous actor who played an iconic superhero (remember, Keaton was a former Batman), but who is now challenged as he tries to mount a Broadway play. Keaton’s character’s murky path to personal redemption may or may not revive his career, and save his family and himself. I loved the technically clever long takes, the stylistic flourishes and the potent, multi-layered story marvelously brought to life by Iñárritu, Keaton and co-star Ed Norton. I expect Keaton to at least be nominated for a Best Actor award and the movie for Best Picture. Keaton pulls out all the stops. He is amazing on every level. Question: Does Riggan actually have divine abilities? Co-stars Zach Galifianakis, Lindsay Duncan, Andrea Riseborough and Amy Ryan all play it for real. Recommended. Now playing at Cinemas Palme d’Or. 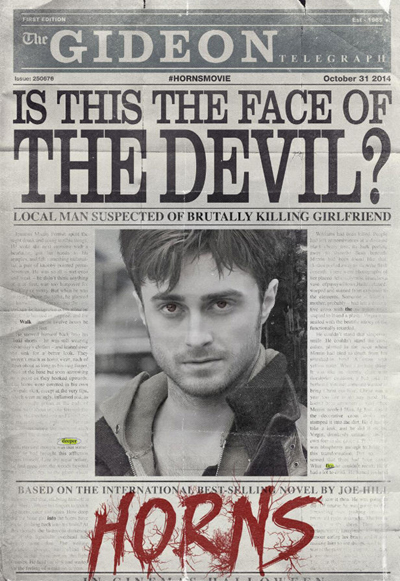 HORNS
Based on Joe Hill’s book of the same name, HORNS is a supernatural, horror, mystery comedy with a great performance by Daniel Radcliffe who plays Ig Parrish, the chief suspect in the rape and murder of Merrin (Juno Temple), his girlfriend. After a night of serious imbibing, Ig awakens to find horns starting to grow from his head. He quickly realizes they compel some people to confess their darkest impulses and may assist him in discovering the true circumstances of Merrin’s murder – and perhaps help him exact a just revenge. I liked the story and the look of this mixed genre fantasy-romance film from novelist and screenwriter Hill, the talented son of Stephen King. Now playing.

Two iconic three-camera Cinerama films from the mid 1950s have finally made it to the home theater for the first time in combo Blu-ray/DVD editions. Both films are presented in “Smile Box” format that reproduces the wide curved screen of the original presentation and is rather effective on big screen home theater systems. But the biggest appeal may be a simplified look at the world as it was 65 years ago and the zeitgeist that will never be again. 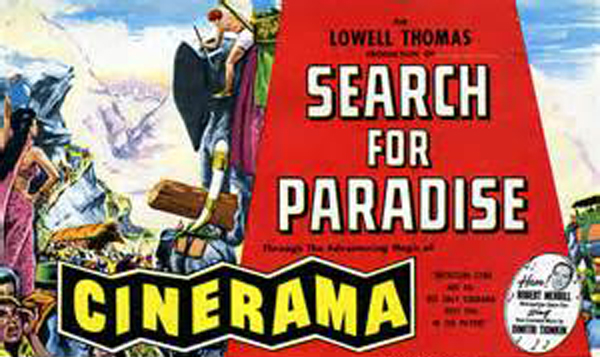 SEARCH FOR PARADISE
Join journalist and traveller Lowell Thomas (the man best-known for making Lawrence of Arabia famous), as he follows in the footsteps of Marco Polo in the fourth of the original 3-panel Cinerama travelogues. Originally releases in 1957, the big images take us to the Himalayas and Karakoram mountains in Central Asia, the tallest on Earth. First stop is the Forbidden Kingdom of Hunza, home of a legendary warrior tribe. Next is an exciting ride on the rapids of the mighty Indus River. We take a rest in the peaceful Shalimar Gardens in the romantic Vale of Kashmir. We fly to Katmandu and witness the coronation of Nepal’s King Mahendra. There’s more. Extras include multiple featurettes and a reproduction of the original program booklet. 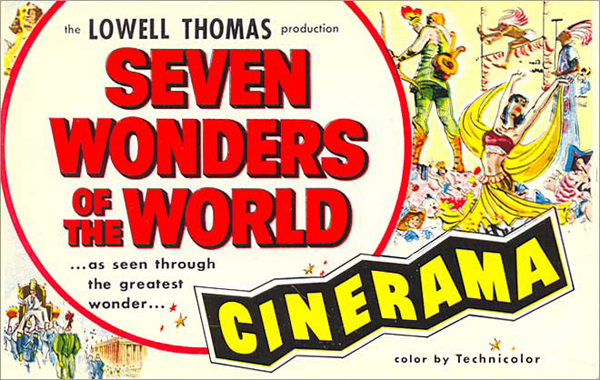 SEVEN WONDERS OF THE WORLD
Of the seven sites ancient Greeks named as the “wonders of the world,” only one remains. Lowell Thomas takes us on a mid 20th adventure as he seeks out seven wonders of the modern world. The 1956 quest begins with the great pyramids (the only remaining wonder of the original seven). We continue over an active East African volcano, under New York bridges, around Rio de Janeiro, the Parthenon (Athens), Angel Falls (S. America) with dozens more stops along our eclectic route. Nice extras include newsreel footage, a music feature, a breakdown reel and a French “Cinerama Everywhere” short.

Flicker Alley has done a nice job transferring these films available on disc. They have not been exhibited for almost 40 years. The quality of some of the segments is somewhat deteriorated – most noticeable in the opening sequences of “SEVEN WONDERS OF THE WORLD.” But other sections look great with hardly a noticeable panel line between the strips and a consistently natural color palette. Both films from Cinerama and Flicker Alley. Blu-ray/DVD. 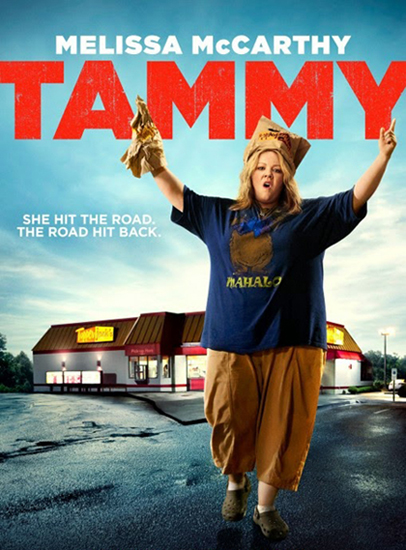 TAMMY
Don’t be fooled by this sad, unfunny throwaway title. I love Melissa McCarthy. She was terrific in BRIDESMAIDS, HEAT and ST. VINCENT. But even if you are a fan of her sympathetic comic physicality, you will be disappointed in TAMMY. Although written by McCarthy and her husband Ben Falcone, this inept, pointless film does not work on any level. After wasting my time watching this sad story that goes nowhere, I was actually angry. Not a great feeling after watching an alleged comedy. I hate being exploited by the lure of a poster or box art. My suggestion to McCarthy is to lose weight and get healthy so she can entertain us for a long time. Morbid obesity, even with a great supporting cast, is no laughing matter. New Line. Blu-ray.