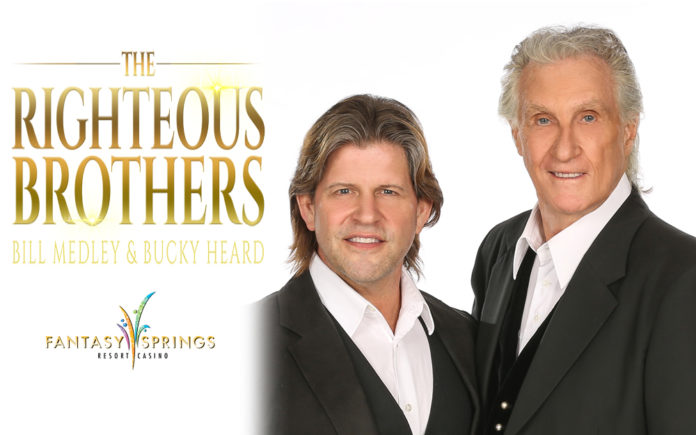 CVW: You’ve been performing to packed crowds for 5 decades, can you talk to me about the evolution of that and how it’s different now than it was then?

BM: “I started out at 22 and now I’m 77. It’s been remarkably smooth. We started out in ‘63 doing rhythm and blues and hard rock n roll. In ’65, we made “You’ve Lost That Lovin’ Feelin’” and became big ballad singers. I really have to give all the credit to the songs. When Bobby and I were young, maybe the kids were coming out to see Bob and Bill. Now they’re coming out to see Bucky and me, but really to hear those songs and relive them. I think that’s probably the main draw.”

CVW: Your songs created the soundtrack for three of the most well-known and iconic movie scenes of all time. This is such a unique phenomenon. That must have changed the face of your fan base some. Can you speak on this?

BM: “It was amazing. Top Gun came out in ‘86 with “Lovin’ Feelin’”. Then Dirty Dancing and Ghost followed, and we literally were as big as we had been when our hits first came out. We had a rebirth and in fact, were bigger than ever. Today it’s great because a lot of people influenced by those movies are coming to the show, along with people who grew up with the music. You couldn’t plan it any better.”

CVW: You’ve gotten the Righteous Brothers back together with the addition of Bucky Heard after losing Bobby Hatfield in 2003. Does it feel like old times?

BM: “It really kinda does. Like we say, on stage you can’t replace Bobby Hatfield, he was one-of-a-kind; an exceptional singer. Bucky is, first of all, a great guy. He’s become one of my best friends. We have a lot of fun laughing. We are both football nuts. He sings these songs incredibly. He doesn’t try to be Bobby. In the last few months we’ve really found our groove. We’re doing great together. Bucky is filling in and he gets it but it’s just a really great Righteous Brothers show. We have a lot of fun and so will the audience.”

CVW: You were inducted into the Rock ‘n Roll Hall of Fame in 2003 and you’ve won countless awards. So what has been the most rewarding aspect of your career thus far?

BM: “We went on the first American Beatles/Rolling Stones tour – before “Lovin’ Feelin’”. They knew us from our first two albums that didn’t make it in the states nationally but were big on the West Coast. One of the greatest things Bobby and I did, was in ‘66, we were the opening act for Jack Benny in Lake Tahoe and got to do a 20-minute monologue with Jack Benny – who was not only a legend but the best at what he did. It was a thrill for us to do that. That was the beginning of the Righteous Brothers, but now being able to come to the Coachella Valley and still draw big audiences is probably the greatest thing that’s ever happened to me. In the 60s, the audience gave us this success. I don’t even know that we earned it but they gave us this gift of success and now it’s up to us to give it back to them so they can relive those memories. So being able to do that right now is the most rewarding thing I can think of.”

CVW: What can fans expect when they come to your show on October 28 at Fantasy Springs?

BM: “Well, we do all the Righteous Brothers music, we’re not trying to be anything but. We do all the hits. We tell a few stories about going into the Hall of Fame and it’s a really entertaining show. We do a new song because it’s kind of fitting for what’s going on in the country right now called “Love Wins All.” It’s about let’s love each other, but that’s about the only new stuff. I can remember going to see acts that didn’t want to do any of their hits and only new stuff and I thought, ‘Why do you think I’m here? I wanna hear those hits!’”

So do we. You can hear those hits on Saturday, October 28 at Fantasy Springs Resort Casino. Go online for more information and to purchase tickets: http://www.fantasyspringsresort.com/prod/entertain/entertain.php#right_bros.