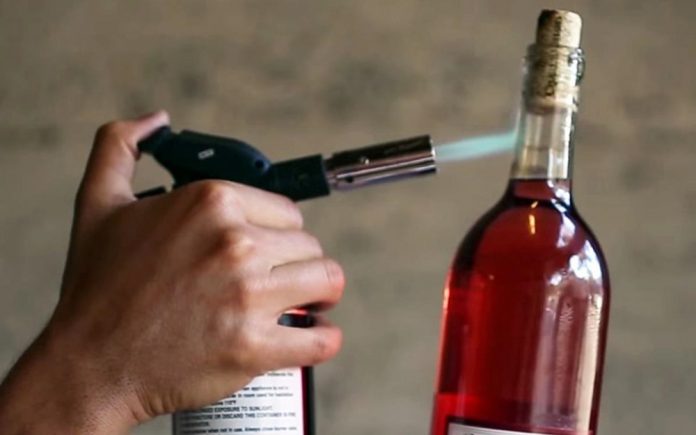 Last week, you’ll remember we did a quick article on the fine art of wine picnicking—where we provided a simple list of what not to forget in the afternoon.

The corkscrew was first and foremost. But then we added, “By the way—there are a few classic ways to open a bottle of wine without a screw. By ‘classic’ I mean ways that are inventive, or wacky, or just plain stupid. So, I’ll be the guinea pig and try out few of these measures for my next article.”  And so here we are.

Fortunately for us, Liquor.com did some interviewing with professional bartenders and wine pros who offered their favorite MacGyver-style wine bottle tricks when there’s no corkscrew handy.  I’ll relay their story and casually add to it from my own experience.

“Not counting “sabering” the weirdest way I’ve opened a bottle is the shoe trick,” says Vince Stilletti, the manager of The Red Hook Winery in Brooklyn, New York. “Weirder still was that it was at a hotel in Italy, where you’d think they’d have wine keys in every room.”

Stilletti goes on to describe the “shoe or boot” method.  By the way—this one really works when you stay at it, so don’t lose heart when you’re facing a snug cork in a bottle.  Further, this method is often used in markets.  I find half-empty bottles of wine strewn about the store—often in the restrooms or in a distant aisle, and when I examine the cork that’s plugged back into the bottle, it is unblemished or un-nicked: all indicating that the shoe trick was used.

The process, says Stilletti, is as follows. “Remove the foil and any cap from the top, then place the bottom of the bottle into a shoe where your heel would go,” he says. “I’ve only done it with sneakers, but anything with some cushioning should work. Then find a sturdy wall or beam, and line your shoe and bottle up to it so that the shoe is vertical and the bottle is horizontal. Holding the bottle and shoe firmly together, tap both against the vertical surface like you’re hammering a nail. It takes patience, but eventually the force will slowly push the cork out of the neck enough for you to remove it with your hand.”

So if you’re on picnic without a corkscrew, stay close to an old oak tree.

“New York City bartender Paula Lukas achieved a similar effect with a towel and tree. “When I was a camp counselor and didn’t have an opener, we wrapped the bottle in a towel and banged it against a tree,” she says. “It worked.”

Lauren Darnell, a bartender and spirits expert in Seattle, has put the shoe trick to use herself in the past, but notes that a ballpoint pen will work in a pinch. “I once used one to whittle away at the cork, then I strained [the wine] through a T-shirt.” While it wasn’t necessarily a career highlight, she adds, it did work, and sometimes that’s all you can really ask for. According to drinks writer Taylor Tobin, you can also simply push the cork into the bottle using a Sharpie. Fellow experts Caroline Hatchett and Isabella Newman recommend doing the same with a sturdy tube of mascara.

Tweezers can be handy during these times.  You pretty much attack the cork one way or another, or if you lose patience you’ll just stomp the cork down like a ballpoint pen.  “A California spirits pro, Drew Record, recalls using a colleague’s very expensive Tweezerman Ultra Precision tweezers on a train from Paris to Reims.  ‘Oddly, there were no French passengers wielding a spare wine key. I went to work extracting the cork. After a few harrowing minutes, we were rewarded with delicious wine. Sadly, the tweezers did not recover.’”

Well—if you don’ have a corkscrew, but, happen to have a “long screw” handy—“you can screw the length of the long screw into the cork; then you can use the claw part of a hammer, that you also have handy, and simply pull on the screw, and –ta-da!–there’s wine.”

Speaking of having things handy about, there is the bike pump method. Houston bartender Christopher Huang says, “Shove the inflator needle all the way through the cork and pump away,. I had a bike pump that I held between my feet, and I just stopped pumping when the cork edged out halfway. It didn’t take very many pumps to accomplish the goal either.”

And finally there’s the port tongs method:  If you’re so situated with fireplace tongs close by and some good old-fashion snow outside—consider this:

According to New York City bartender Nick Venditti, “I used this at my parent’s house upstate because there was no corkscrew but there was a wood-burning stove.” I heated up the tongs until they were red-hot, grabbed the bottle around the neck with them, brought the bottle outside and immediately packed snow around the neck. It cracked evenly at the neck line. I ran it through a funnel and strainer to be safe, but there were no glass shards in it.”  Happy Endings!  Cheers!