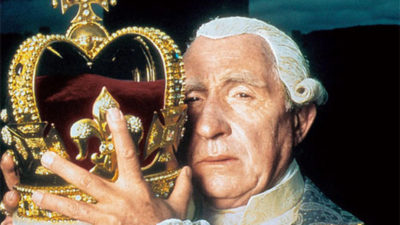 In lieu of reviewing a big screen theatrical feature, and since there are no significant new films screening in the CV, I thought I’d take another look at a terrific movie from the 90s that’s getting a lot of attention in the home video market.

Based on the widely acclaimed stage play by Alan Bennett, who also wrote the screenplay, this engrossing and darkly humorous film starring an inspired Nigel Hawthorne as an unhinged head of state resonates on so many levels in our crazy world that one cannot help but wonder what if something like this happened in the USA?  How would the powers-that-be respond and how would our enemies react to such national vulnerability?

Set in 1788, about 30 years into his reign and just after losing his American colonies, King George III of Great Britain and Ireland loses his sanity. 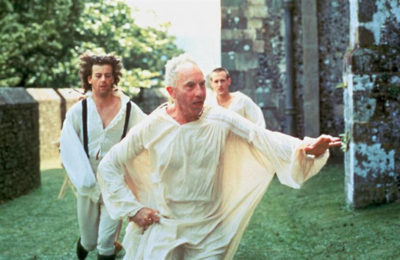 There’s no hiding his disturbing condition.  He runs around in his pajamas, and literally launches himself upon ladies-in-waiting in a shocking display of sexual assault.  He decimates shrubbery with a stick calling it the Americas.  Although not in the movie, the gossip of the day had it that King George mistook an oak tree for the King of Prussia, which may or may not have actually happened.  But the signs of increasing dementia, ranging from violent fits to fowl language and forgetfulness could not be ignored.  His vulnerability was a perfect chance to overthrow the unpopular king in favor of the Prince of Wales (Rupert Everett), but the king’s prime minister William Pitt (Julian Wadham) and his wife Queen Charlotte (Helen Mirren) are determined to protect the throne.

In the closing credits, porphyria is suggested as a likely cause of the king’s deteriorating mental condition.  That diagnosis, suggested by some historians, is a modern one.  The movie has a lot of fun with the doctors called in to treat the king.  They are depicted as a bunch of quacks obsessed with examining the size, color and texture of his bowel movements and speculating on his blue-tinted urine.  All this really happened.

When he shouts, “Get away from me, you scabby bum suckers!” to his two Doctors Willis (father and son), they don’t obey but instead strap him into a chair in a kind of mockery of  sitting on a royal throne.  “I hate all the physicians, but most the Willises,” complained the king in real life.

While the king struggles and bellows, the soundtrack cranks up Handel’s Zadok the Priest – music that’s traditionally played at the anointing of a British monarch.

Bennett focuses on the absurdity of the situation with an emphasis on comedy rather than tragedy.  I liked the comic scene referencing King Lear.  But make no mistake; this is Hawthorne’s movie.  His full throttle performance received wide critical praise, including Best Actor at the British Academy Awards and a nomination of the same at the Oscars.

NEW BLU FOR THE HOME THEATER 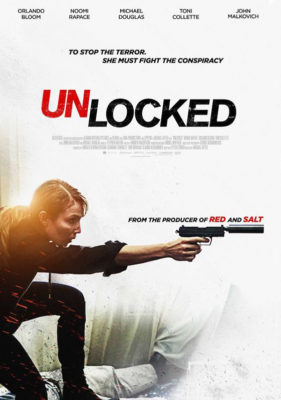 In this wanna-be action thriller, CIA agent and ace interrogator Alice Racine (Noomi Rapace) is forced to live in London as a caseworker.  Her career was sidelined after she failed to unlock a prisoner in time to save the lives of dozens of innocent people from a terrorist attack in Paris.  Now, after a living a quiet life in London as a caseworker, Alice is unexpectedly called back into action by her mentor, Eric Lasch (Michael Douglas) after the CIA apprehends a suspect believed to have direct knowledge of another imminent attack.  Alice discovers that the classified information she has uncovered has been compromised. Running for her life, Alice turns to ex-soldier Jack (Orlando Bloom) in order to prevent a lethal biological attack on the citizens of London.

Confession.  After paying close attention for 100 minutes agonizing minutes, I still don’t have a clue what it was all about.

When all is said and done, the movie doesn’t actually unlock anything worth keeping your attention to final fade out.  Rapace is great in the lead and the premise is intriguing, but the movie is disappointing.