This month saw the release of German filmmaker Joerg Steineck’s “Lo-Sound Desert” documentary on DVD. This 10 year labor of love takes a sharp and sardonic look at the music scene that sprung up quite organically back in the ‘80s.

A quixotic tribe of kids, led by Mario Lalli, Zach Huskey, Herb Lineau and Sean Wheeler, had been weaned on skateboarding, Punk Rock and Black Sabbath. In a land of country clubs, ring-a-ding-ding music and golf slacks, they began playing their own primitive hybrid of Punk and Metal. Knowing local night clubs would never showcase their shambolic sounds, they took to the open desert armed with guitars and portable generators.

It’s the stuff that legends were made of, and has since achieved worldwide recognition for bands like Fatso Jetson, Dali’s Llama and Throw Rag. It was also an incubus for the superstar act, Queens Of The Stone Age. But it’s only half of the desert story. The other half is still being written up in the Hi-Desert.

Joshua Tree has been a safe haven and a spiritual touchstone for musicians for more than 50 years. Donovan and the late Gram Parsons embraced the barren landscape as a retreat. The pilgrimage of artists continued with John Lennon, Keith Richards, Eric Burdon and most famously, U2.

At the dawn of the ‘90s, more and more musicians weren’t just escaping to Joshua Tree as a getaway. They were actually pulling up stakes, ditching the urban sprawl of Los Angeles and moving here. alt.country stalwarts Victoria Williams and Mark Olson were pioneers, along with lesser-known (but no less important) lights like Fred Drake and Teddy Quinn.

Fred rented a ramshackle house and along with Teddy, opened Rancho de la Luna Recording studio, although he passed away in 2002, Teddy continues to carry Fred’s musical torch. He hosts and curates musical events, and he started an internet radio station, Radio Free Joshua Tree. He also writes, performs and records his own music with protean musicians like Thom Merrick, Jeff Boaz, Jennifer Irvine and Leslie Mariah Andrews.

These days, Joshua Tree feels like its own, self-contained musical universe. Maintaining the spirit of less verdant Laurel Canyon, the small enclave is ripe with recording facilities like High Lonesome, Back Of The Moon and Red Barn Recorders. Live performances are plentiful in spaces like the Beatnik Lounge, Joshua Tree Saloon and of course, the venerable Pappy & Harriet’s. It’s a place where the DIY ethos of Punk collides with the Peace & Love credos established during the Hippie era. In short, people feel unafraid to let their freak flags fly.

Joe City Garcia is another transplant who abandoned the dense chaos of Los Angeles for the wide open spaces of Joshua Tree. A native of Northern New Mexico, he took to music at an early age. He’s tackled myriad musical genres, from Tex-Mex, Garage Rock, Psychedelia and Punk Rock.

Gravitating to L.A. as a young man, he fronted his own bands; The Crawlers as well as Joe City & The Nightcrawlers, the latter released a self-titled EP in 1982. Early on he connected with kindred spirit, Teddy Quinn, and the pair collaborated in the band Dream Army. By the end of the 20th century Joe had also sojourned to the High Desert.

Initially he worked with author/journalist/poet Ruben Martinez. Together they co-wrote and recorded music for a theatrical performance piece entitled “Border Ballad.” They performed this and other pieces all across the country.

Around the same time Joe met his wife, abstract artist Joanna Fodczuk. He stepped away from the music scene for a bit, intent on re-charging his batteries. Of course, the pull to create was too strong and he began playing in pubs and coffee houses in Hollywood, reconnecting with old friends and making new ones. 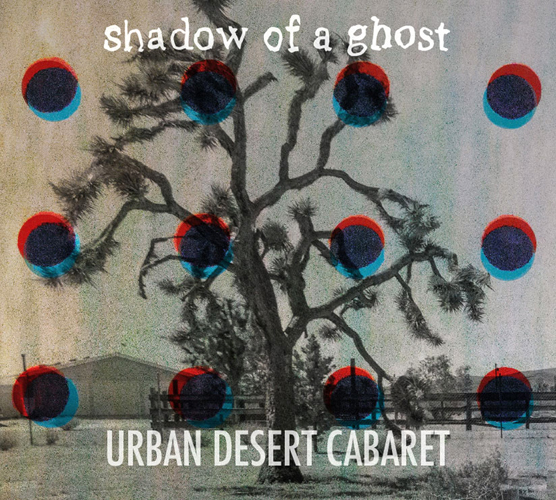 His long-playing debut, Sometimes The Angels, arrived in 2015. Essentially a solo album it included contributions from Hi-Desert luminaries like Teddy Quinn, Faith and Tim Chinnock from Adobe Collective, Bobby Furgo, Lisa Mednick-Powell and Kip Powell, as well as legendary drummer Danny Frankel. His creative spark fully ignited and Joe has returned with his sophomore effort, Shadow Of A Ghost.

Tough childhood recollections are filtered through a lilting, Gypsy Jazz melody on “The Delta Bar.” Fluid violin runs and liquid arpeggios connect with percolating percussion. Looking through a “crack of time” the lyrics limn the casual heartbreak of a childhood spent around drunken habitues in the local dive bar. “7-Up with a cherry on the rocks and chips could keep us smiling…They sent us to the cigarette machine and said to make it snappy/In the smoky room, the whiskey and the beer, I guess we all looked happy.”

Cryptic lyrics offer a Rorschach sketch of a troubled soul on “Wouldn’t You Agree.” “She’s got a way of acting you can’t really describe, when you thought she’d gone away, she’d just found a place to hide.” The melody is a South-Of-The-Border charmer accented by a wash of harmonica and warm Wurlitzer tones.

Both “Queen Of Light” and “Vienna Vampire Waltz” add new colors and textures to Urban Desert Cabaret’s rich sonic palette. The former simply shimmers. The lush melody is tethered to a galloping gait and jangly guitar licks. Here Joe spins a yarn that meets in the ether somewhere between mystery, mythology and apocrypha.

The latter is powered by courtly accordion fills and splashes of percussion in ¾ time. An enigmatic raconteur offers some hard won wisdom; “Decadence in good measure is lovely, even a vampire knows when to quit/It’s the passion and the grit, the art of the dance allow a lover like me to split.”

“Go Away” and “World On The Edge” both explore themes of mortality and loss. On the spare “Go…” violin and guitar intertwine, cocooning this brittle dance with death. The lyrics quietly resist the seductive charm of the afterlife; “Maybe some other time I can walk with you, but tonight under these stars on Vin Rose Avenue/Please walk on the other side of town, I think I’d rather stay. Go Away.”

After the shadow and light chiaroscuro of “Go Away,” “World On The Edge” is a vibrant burst of technicolor. Here propulsive rhythms collide with luminous organ notes and roiling guitar.

Cleverly name-checking the Clash and P.F. Sloan by way of Barry McGuire, the verbose lyrics insinuate that the end is nigh; “Eve Of destruction she took a break, but now it’s all used up, behind the scenes she’s creeping along, she can never destroy enough/Politics, religion and the holy grail, the songs and stories and poems of revolution buried in the dust.” To paraphrase R.E.M., it may be the end of the world as we know it, but this song feels fine.

Other interesting songs include the Country-tinged Gospel Blues of title track and the piano-driven “Ain’t Got No Blues.” The album closes with the stark and powerful “Flagman,” a dark song about finding light, anchored by a spitfire electric guitar that sparks and pinwheels through dense instrumentation.

Travelling up Highway 62, it’s easy to see why so many artists, poets and musicians like Gram Parsons, Victoria Williams Teddy Quinn and of course Joe City Garcia continues to draw inspiration from this hardscrabble land. Sustaining a life here requires passion and grit. But the rewards are myriad.

Simply put, Shadow Of A Ghost delivers on the promise of Sometimes The Angels. Joe City Garcia (ne’ Urban Desert Cabaret) is here to stay, ushering in a new chapter of the Desert Rock story.