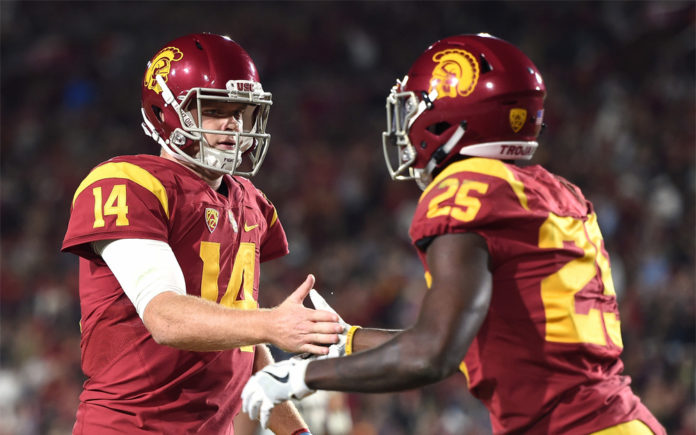 Southern Cal’s Trojans hope to ride the momentum of last season’s great finish into this season, which they’ll begin as the betting favorite to win their conference, something they haven’t done in almost a decade. And with a Pac-12 title might come a return to the Big Time, in the form of an invitation to the College Football Playoff.

The Trojans opened last season with a big thud, losing to Alabama 52-6. Subsequent losses to Stanford and Utah dropped USC to 1-3. But a change at quarterback sparked Southern Cal, which then won its last nine games, knocking off South Division champion Colorado, Pac-12 champion Washington, UCLA, Notre Dame and Big Ten champion Penn State in the Rose Bowl along the way, to finish 10-3.

In doing so, while going against one of the top-five schedules in the country last year, the Trojans played “over” a wins total of 7.5.

This Year in Preview

The Trojans return a dozen starters for this season, tied for second-fewest in the Pac-12. Only five are back on offense, but one is quarterback Sam Darnold and another is running back Ronald Jones. It was Darnold who, as a freshman, directed USC to those nine straight wins to end last season, completing 67 percent of his throws, compiling a 31/9 TD/INT ratio. And junior Jones has 2,000 yards rushing through his first two seasons. But they do have to replace three of the big boys up front. Defensively seven starters return, including five of the front seven, on what might be the best stop unit in the conference.

USC opens with a home date against last year’s small-school Cinderella, Western Michigan, which lost its head coach over the off-season. In early betting the Trojans are favored by 26 points over the Broncos. From there USC gets Stanford, Texas, Utah and UCLA at home, with the toughest road games coming at Washington State (on a Friday night) and at Notre Dame. And they miss two of the top three contenders from the North Division, Washington and Oregon.

However, USC also will play 12 weeks in a row, without a bye week.

Betting the Trojans This Season

Southern Cal begins this season as a popular pick to click, riding a nine-game winning streak, with a Heisman-candidate quarterback. But as such they might be overrated on a week-to-week basis. The Trojans will be favored for at least 11 of their 12 games, and often by a lot. Last year the biggest spread USC faced was 17 points, but they’ll probably be favored by more than that four or five times this season. The Trojans went 5-1 ATS at home last year, but they won’t match that this year. Instead, look to back USC on the road, where the spreads are friendlier.