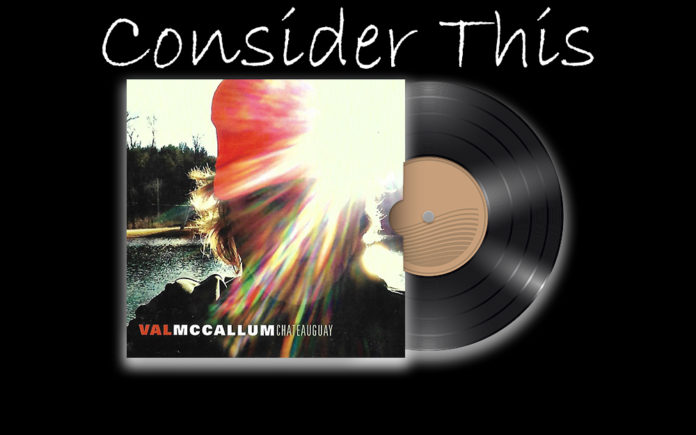 “Why we love is such a mystery, a human force Akin to gravity, the only crime is when it disappears.” That’s Val McCallum waxing philosophical on “Outlaw Song,” From his new album, Chateauguay.

You may not be familiar with the name Val McCallum, but you’ve probably heard him play. As a guitarist, he has played with everyone from Sheryl Crow, Shelby Lynne, Bonnie Raitt, Lucinda Williams, Willie Nelson, Randy Newman, Harry Nilsson and the Wallflowers. He has toured with Jackson Browne on and off for decades. He even appeared as part of Vonda Shepard’s house band on the “Ally McBeal” television series.

His intersecting musical and showbiz histories run deep. His Scottish Grandad was a professional concert violinist from Glasgow and concert master of the Royal Philharmonic Orchestra. Not only did he play on the Beatles’ “A Hard Day’s Night,” he advised Jimmy Page to use a violin bow on his guitar strings.

Valentine McCallum was born and raised in Los Angeles, the youngest of three sons. By the age of seven, he was already learning guitar. Encouraged by his older brother, Paul, he began taking lessons at Westwood Music Store. Once he learned a few chords, he grew impatient with formal instruction. His record player became his official tutor, moving the stylus back and forth on his favorite songs became his real education.

Although his mother advised Val to learn music theory, he took his cues from standard bearers like Chuck Berry, Jimi Hendrix, Keith and Mick Taylor from the Stones. Long-lasting Inspiration came from growing up listening to ‘70s Top 40 radio, which was chockablock with effortlessly intricate Playing from Wrecking Crew players like Tommy Tedesco, inventive string-benders like Amos Garrett and emerging guitar heroes like Don Felder and Jesse Ed Davis.

Despite growing up in relative comfort in Los Angeles, Vermont and on movie sets all over the world, by his mid-20s, Val had experienced his share of tragedy. His brother Jason died from a drug overdose in 1989 and a year later his mother lost her six-year battle with breast cancer. He began his musical career with Harry Nilsson at age 18, and he hasn’t looked back.

Earning his keep playing recording sessions and as a touring guitarist, has enabled Val to interact with a cross-section of superstars and journeyman players. He’s appeared on albums by Joan Osbourne, Ivan Neville, Jonatha Brooke,Tim McGraw, Was Not Was, John Doe, Shelby Lynne, Gregg Allman and Matthew Sweet.

It was while he was working on the “Ally McBeal” series that he connected with Pete Thomas and Davey Faragher. By then, Pete’s regular gig was as Elvis Costello’s drummer, a spot he had held since 1977. Davey had played bass with everyone from Camper Van Beethoven, Cracker and John Hiatt. (Since 2002 he has held down the bottom in Elvis Costello & The Imposters) There’s a lot of downtime in television, and the trio hatched a plan to start a new band, Jackshit.

Kind of a Bakersfield version of the Traveling Wilburys, they created a colorful backstory and created new musical Alter-egos, Val is Beau Shit, Pete is Pete Shit and Davey Is Shorty Shit. Their live sets around L.A. won them a devoted fan base and between 2000 and 2015 they’ve released three albums, their self-titled debut, 2006’s Jackshit 2-Welcome Nugget and (inevitably) Fresh Shit. Last year the three-piece backed Jeffrey Gaines on Alright, his brilliant 2018 album.

In the last few years, Val has somehow managed to carve out time for a solo career, his debut, At The End Of The Day, appeared in 2012, which featured the bittersweet “Digging For Gold,” the luminous “Tokyo Girl,” the heartbreaking “Deal With It,” a song he co-wrote with him mum about the death of his brother, as well as “Rare Bird,” an homage to his mother. Now he has finally returned with Chateguay.

The opening cut, “Stellar Girl,” sounds like a long-lost collaboration between the Eagles and Crosby, Stills, Nash & Young. Steeped in warm Country Comfort, the sturdy melody is anchored by bramble-thick guitar riffs wrapped around sunny harmonies, a stutter-step rhythm, thrumming bass and rustic organ notes. Lyrics speak of love and redemption; “You found my love in a broken heart, you found my heart on a broken street, yeah you gave my love a second chance, when you found your way to me.”

While his first album was stripped-down and bare bones, here, he adds panoply of colors to his sonic palette. On “Shotgun And Bombshell” razor-sharp guitar riffs ride roughshod over sinewy bass, sylvan acoustic licks and a crackling beat. The melody is quintessentially Californian, and the arrangement adds a soupcon of Stonsey swagger. The lyrics are cryptically cinematic, unspooling a saga “Played out on the silver wall.” Everything cosmically collides on the break, as gutbucket guitars manage the neat trick of sounding impeccably dirty. Val’s scratchy vocals, which sandwich comfortably between Don Henley’s drawl and Tom Petty’s Gainesville growl, are the through line that ties it all together.

Burnished and brilliant, the title track is the album’s centerpiece. Braided acoustic notes intertwine with twinkly piano. There’s a grace and gravitas to this minor key melody, accented by hushed harmonies, shivery viola, violin and bottleneck guitar. Named for the woodland area behind Val’s place in Vermont, the lyrics paint a vivid picture; “There was nothing but the long-edged blade of the winter wind on the outer plains, and the disappearing road he’d lost and the line he’s never crossed/In the shallow sun, in the unseen light, he had thrown his heart to the ragged night on the back of her skin, he’d wagered his life for a horse he couldn’t win.” This admission ignites a scorched earth guitar solo.

The scene shifts from unfettered woodlands to the shackles of mass incarceration on “Feel Her Fire.” The song opens with ethereal Beach Boy-esque harmonies, before giving way to Val’s whiskey-soaked rasp. Effortlessly slipping into the skin of a convicted “enemy of the state,” he pines for a lost love. The vibe is sultry and subdued until the arrangement suddenly shapeshifts, adding frenetic whiplash guitars and a jackrabbit beat, only to bommerang back to the relatively quiescent verses. On paper, these wild mood swings might seem like musical schizophrenia, but as sun-kissed harmonies crest over cantilevered guitars, the musical dexterity shines through.

He executes a stylistic 180 (because he can), on the aforementioned “Outlaw Song.” The instrumentation is spare and unvarnished, just Val and an acoustic guitar. Liquid arpeggios cascade over a mid-tempo melody. A fugitive from love and the law, on the run, on the lam, notes that ephemeral pleasures are fleeting. “Did you ever sit and watch the water flow, you know back is where it cannot go.” Spanish-flavored filigrees on the break underscore the song’s evanescent bliss.

The best tracks here, “Brothers” and “Charlie’s Coal,” feel deeply personal. The former is a clear-eyed encomium to his late brother Jason. Nine months older than Val, the pair were raised almost as twins. Nearly 30 years on, the loss remains keen. The wistful melody is powered by tandem acoustic and electric guitars, spidery bass, a wash of organ and a kick-turn beat. The lyrics, something of a one-sided conversation; “You used to say you were just kicking ass and taking names, and you kept your foot on the gas as your life went up in flames.” Bent electric notes bookend the feathery chorus as Val admits “Until I run out of road, I’ll never find anyone like you in this life again, brothers ‘til the end.”

The latter, a cracked Country waltz, offers a tender tribute to his world famous step-dad, who began his journey the son of Lithuanian immigrants that made their living as coal miners. Charles Bronson, (ne’ Charles Dennis Buchinsky), escaped that fate by entering the military during World War II and utilizing the G.I. Bill to jumpstart his acting career. Brushed percussion connects with airy acoustic guitar, fluttery organ and stately piano. The lyrics sketch out poignant biographical notes, saving the final verse to offer a heartfelt expression of gratitude; “I live by the ocean, a California dream, he lives under the earth now, what he left isn’t seen/He gave me my first guitar, I still remember that day, I still see his smile every time I play it, it gets in your heart and never goes away.” The guitar solo here, Buzzy and tough-minded, feels wildly apropos as a salute to a stoic action star.

Other interesting tracks include the back-porch ramble of “Ridge Runner” and the jittery delight of “Nobody Lives Forever.” The album closes with the Folk/Blues of “Hell And Back,” which seems to offer an oblique commentary on the cost of artistic compromise. Hard-won truths are buttressed by wily harmonica, blistering guitars, tensile bass, keening keys and a rock-steady rhythm.

Val is backed on Chateguay by a wolfpack of pickers and players, including drummers Joe Seiders and Shawn Pelton and Kaitlin Wolfberg adding violin and viola. Backing vocals were provided by Z Berg and Shelby Lynne. Of course, his Jackshit brothers pitched in as well. Davey played bass and added harmonies to every track and Pete was behind the kit on a couple of songs.

Not enough can be said about producer Chris Price, who added electric and acoustic guitars, organ, piano, percussion and vocals to nearly every song. He helped create a soundscape that shifts from charming chiaroscuro to stunning Technicolor.

Chateguay is a dazzling achievement, conjuring comparisons to Crosby, Stills & Nash, Nick Drake, the Eagles, Dennis Wilson, Sun Kil Moon and Jonathan Wilson, without feeling secondhand or derivative.  It provides the perfect introduction to Val McCallum, a protean talent who has been hiding in plain sight.