The AMFM Fest (Art, Music, Film and More) will be the stage for this year’s presentation of the Wally! Award on Sunday, November 16th in Cathedral City. The award will be given to this year’s film students who won out on the Pitch Program in the Advanced Film Production class at San Diego State University.

The Wally! Award is the conception of Wally Schlotter. Schlotter is a SDSU alumnus, esteemed former Film Commissioner, Emmy Award Winning Producer and Film Festival organizer. Needless to say, Schlotter is very well versed in the film industry. He came up with an idea to help out the universities film class after it gained a reputation for not living up to its potential.

He proposed a plan to the class’s professor Greg Durbin that would inspire students and help the class out of its slump. The Pitch Program would allow students to pitch their film projects before industry professionals. The winner would receive a grant (The Wally! Award) to help them complete their film project. The result of the program has proven to be enormously successful and has produced quality film work that could easily compete with top notch film schools in the country. The Wally! Award/Pitch Program has become one of SDSUs most prestigious grants and continues to inspire the universities film students to reach their creative goals.

This year the Wally! Award will be presented to film student Wayan Morales and his team. Team members include cinematographers Rob O’Gara and Sacha Sogalow, as well as producers Zach White and Sam Rinaldi. The film the team is working on is titled, “Adam of Your Labor”. The title is inspired by a line from Mary Shelly’s Frankenstein. The line is part of dialogue from Frankenstein to his master, conveying basically how he is his creation, “I am the Adam of your labor,” the monster says.

The premise of the teams’ film focuses on the effects of a little girls (Sheila) psychological trauma after she witnesses her father murder her mother’s lover. The little girl and her mother escape to an isolated house where Sheila represses her memory of her father’s horror. Not remembering her father’s crime, she starts to miss him and attempts to contact him. In the midst of her yearning for her father…the film introduces a new character. In the backyard of the house, lives a Frankenstein like monster who is holding up in the dilapidated shed. Then the film takes a twisted turn when Sheila discovers the mild mannered childlike monster and proceeds to abuse and terrorize him, projecting her inherited violence from her father to the powerless monster. The rest of the story is under wraps. It has a great premise and seems that it will be filled with thrills and laced with sympathetic emotions. The short film will last about ten minutes and will be completed in a few weeks, with its debut scheduled for the SDSU showcase in December. After the showcase, Morales and his team will be submitting the film to different film festivals around the country including our own Palm Springs Short Film Fest.

Morales is excited about receiving the award noting that it will help with the financing of the film, enabling them to pay for everything from make-up to film equipment.

Morales will be graduating from SDSU May of 2015 and intends to move to Los Angeles and pursue his film career, “I plan to move out there and try to make it in the industry,” said Morales. And with winning the Wally! Award, he and his team are that much closer to making it indeed. Best of luck!

For more information on the AMFM Fest visit www.amfmfest.com 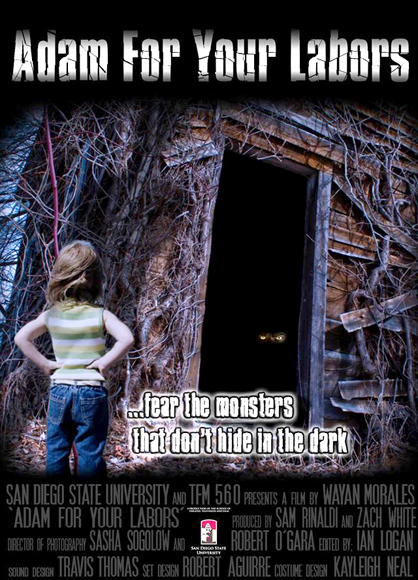