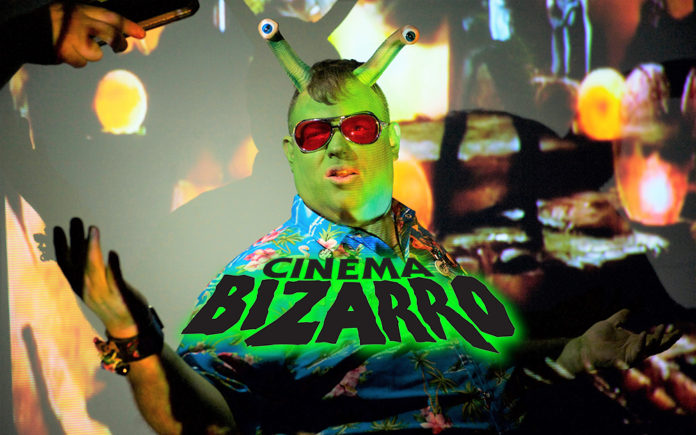 Greetings, Earthlings! If you’re looking for the best movie night this planet has to offer, look no further than Cinema Bizarro, Hard Rock Hotel’s curated dive-in movie series in Palm Springs. Beginning on Thursday, August 17, the Hard Rock will feature a classic movie, hosted by an actual alien. Yes, an alien. Said host, Rhett Rivideohz, is an ambassador from his planet, Rivideia, and he’s been visiting our planet to collect films about our culture. How did an extraterrestrial find himself hosting this event? As Rhett himself tells it, he was sent on a test mission from Rivideia, retrofitted with a handheld device that teleports him to different locations (we may refer to it as a GPS) and wound up at the Hard Rock Hotel pool. He met Adam Levy, Marketing Manager at the Hard Rock, and told him of his diplomatic mission to save our species and our culture. You see, Rhett and his fellow Rivideians have an arsenal of favorite American films, and they don’t appreciate that original ones are being remade and aren’t up to their standards. The series kicks off with a viewing of Robocop in its 30th anniversary of being released and will continue every Thursday, with the exception of the second movie night on Friday, August 25. This night is an official Comic Con Palm Springs event and will feature a showing of cult-classic, Return of the Living Dead. Other classic movies in this series include Back to the Future, Sixteen Candles, and many more. 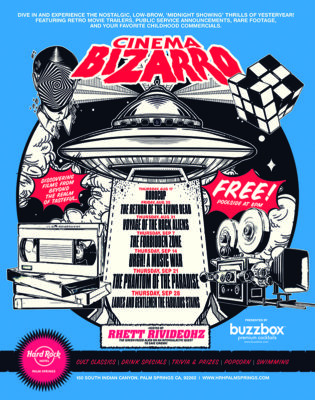 This fun and campy film series is completely free and begins at 8 pm. Alien host, Rhett Rivideohz teleports to the pool, gives his introduction and begins the show, which will be pre-edited to include a trailer of the next week’s movie, many vintage commercials from the 80s, PSA’s, an interactive intermission, and other novelty retro finds, as well as clips from Rhett’s home planet. Other intricately awesome videos and movie prizes and giveaways (including the hat Marty McFly wore in Back to the Future 2!) will be in store for lucky movie-goers. Bring your swim trunks or best bikini, as the Hard Rock pool transforms into your own personal theater. The hotel will provide pool floats for viewers to lounge in as they relax and watch each week’s featured film in comfort. Come hungry and thirsty – picnic baskets will be available for purchase and contain a variety of delicious items – cheese plates, breakfast cereal and milk, sandwiches, and more). Drink specials, including Buzz Box specials and $4 beers will be offered to all guests. See you on Thursday, earthlings!

Hard Rock Hotel Palm Springs is located at 150 S Indian Canyon Drive in Palm Springs. For more information about this series, as well as other activities at Hard Rock, please visit their website: http://www.hrhpalmsprings.com/events-calendar.aspx.