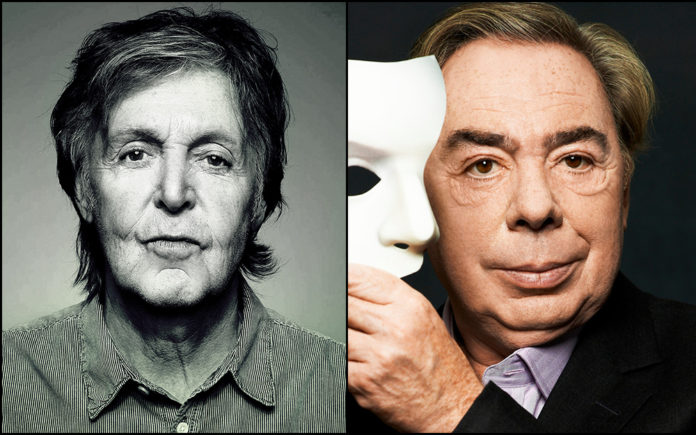 With temperatures firmly in the triple digits and tempers flaring over Trump tweets and trade tariffs, let’s take a break from all of that and get all tabloid newsy on you.

Who is the wealthiest musician?

Drawing from numerous sources, the consensus appears to be that the composer of stage plays like Cats, Phantom of the Opera and Jesus Christ Superstar is the wealthiest musician in the world.  With a net worth of $1.2 billion, I am referring to none other than Sir Andrew Lloyd Webber, 70.

Hot on his tail is a knight in his own right, Sir Paul McCartney, 76, at $1.1 billion.  Like Andrew Lloyd Webber, Sir Paul has composed so many songs that are part of the fabric of humankind that has quite the retirement income stream from royalties should he ever choose to retire. Sir Paul is anything but retired as his latest album Egypt Crossing shows.

Third on the list of wealthiest musicians as brought to you by Winslow Drake Investment Management, your only choice for investment management in the Coachella Valley, come on down and give them a try, is Shawn Carter, 48, at $900 million.  With a stage name of Jay-Z, he is probably the most accomplished rapper ever.  Additionally, he married Beyonce and invested $200 million in Armand de Brignac champagne.

Fellow rapper and entrepreneur, Sean Combs, 48, aka Puff Daddy aka Puff aka P. Diddy aka Diddy aka Swag (but only for a week) aka Love aka Brother Love comes in fourth.  Despite his regular identity crises, Combs is worth a nifty $825 million.  Much of his net worth comes from his ownership stake in Ciroc vodka and successful clothing lines.

Fifth on the list is Herb Albert, 83.  Who is Herb Albert you may wonder?  He is the ‘A’ in A&M Records.  (What is a record some of you may wonder? Music used to come to us on fragile, circular black disks that had this groove in it that started on the outside and rotated toward the inside.  For us to hear the music that was embedded in that disks groove, we had to put it on a record table that spun the disk round and round at the speeds of 33, 45 or 78 revolutions per minute.  We would then place a mechanical arm with a diamond needle on the outer edge and somehow music played.)  Besides being the founder of a successful record label, Albert had five #1 albums, nine Grammies and has sold more than 70 million albums worldwide with his biggest hit being “This Guy’s In Love with You.”  Not bad for a trumpet player.

Back to our countdown of the wealthiest musicians, checking in at #6 and at $800 million is the highest ranking woman on our charts, Madonna Ciccone who turns the big six-oh on August 16th.  For what it is worth, Madonna is close to completion on her 14th studio album.  No word on when it will be released.

Seventh on the list and worth $770 million is Andre Young aka Dr. Dre, 53.  While he was a successful rapper in his own right as part of N.W.A., his wealth came from producing other rappers like Eminem and 50 Cent.  He is also the creator of Beats by Dr. Dre which sold to Apple in 2014 for $3 billion.

Rounding out our list is Paul Hewson aka Bono, 58, of the legendary rock band U2, is worth $600 million followed by Dolly Parton, 72, with more than $500 million.

For comparison, Jeff Bezos who the founder of Amazon is worth a mind boggling $112 billion.

Haddon Libby is the Founder and the Managing Director of Winslow Drake Investment Management and can be reached at 760.449.6349.  For more information, please visit www.WinslowDrake.com.