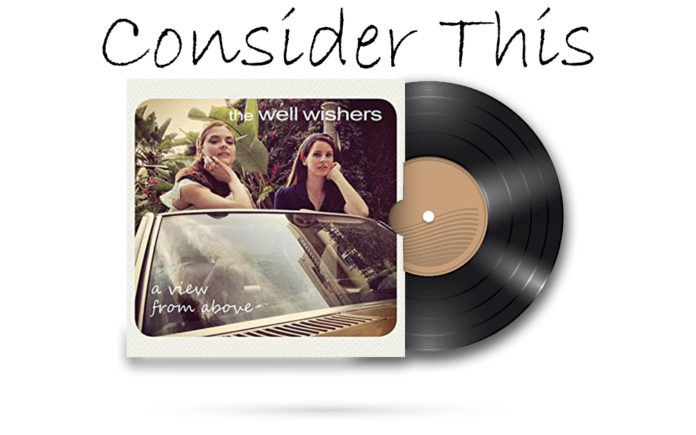 “There’s nothing in the way of a broken heart and a shitty day, but the sun will always rise”

That’s some hard-won perspective found on the song “Never Let You Down” from the new Well Wishers record, “A View From Above.”

Jeff Shelton, sonic architect for the Well Wishers, didn’t pick up the guitar until he was 18, but his playing is so dexterous and adroit, you’d swear He was one of those prepubescent wunderkinds.

He grew up a typical kid in Laguna Beach and headed to another beach town, San Luis Obispo, for college. It was there he began his extracurricular musical education. His nascent skills earned him spots in a couple of up and coming bands. He soon he began writing his own songs, and mastered a plethora of instruments along the way.

After graduation, he gravitated to the Bay Area and connected with like-minded players, bassist Doug Free and drummer Dave Friel. By 1993, the trio was known as the Spinning Jennies, working their way through the San Francisco club scene, they slowly built a loyal following. The band recorded two albums with the original line-up before Dave moved on and Nick Loquintano stepped behind the kit. Hometown favorites, the three-piece lasted nearly a decade, releasing five albums before amicably parting ways in 2002.

Rather quickly, Jeff formed the Well Wishers, which allowed him to be autonomous and anonymous at the same time. See, the Well Wishers was a band in name only. Jeff played, sang, wrote and produced everything on the “band’s” 2004 debut, Twenty-Four Seven. Ridiculously perfect, the album straddled the line between punchy, Power Pop perfection and the kind of sharp songcraft that echoed British Invasion stalwarts like Lennon & McCartney and Ray Davies, as well as Punk/New Wave classicists like XTC and the Jam.

“In Another Life” blends pastoral acoustic arpeggios with sidewinding electric power chords and a jump-cut rhythm. The opening verses feel like a subtle commentary on the tense and divisive atmosphere that currently grips the country; “Under the eyes of watchful wondering, how did it get this way/Nobody sings and nobody dances, when everything goes astray.”

By the chorus the song espouses a carpe diem philosophy. Or, to paraphrase the Byrds, Pete Seeger and the Book Of Ecclesiastes, It recognizes there’s a time weep and a time to laugh, “I believe it’s a miracle, I believe it’s a fortunate device, I believe in the wisdom of never thinking twice.” Jangly guitars on the break underscore the song’s covert optimism.

In an album packed with stellar songcraft, the stand-out tracks arrive one after the next. “I Like You Better” is propelled by stripped down guitar and a chunky, ‘beat-on-the-brat’ backbeat. As the arrangement gathers steam on the chorus, thundering drums and marauding guitar ride roughshod over this self-satisfied declaration of, um, love; “I like you better, I like you better than the rest.”

“April Is Only A Lie” echoes ‘80s antecedents like Hoodoo Gurus, the Ocean Blue and Guadalcanal Diary. Airy and autumnal, it blends chiming acoustic riffs with a thwock-y kick drum rhythm. Veiled lyrics like “There was a time there was a place, in matters of disgrace/There was a lock there was a key, to distract you from The war we can’t see,” hints at the breakdown of civil discourse in this country. As time signatures shift a stinging electric guitar solo crests over the instrumental break.

Muscular power chords collide with a locomotive rhythm on “There Goes My Gun.” The introspective lyrics take a trip down memory lane, recalling early career mis-steps; “Old enough to understand, but young enough to fake it, there goes my gun shooting off the hip.” Growing as an artist requires sacrifice and hurt feelings: “Breaking up the band wasn’t hard to understand, I can finally reconcile for the first time.” Echo-y guitar notes Offer a form of musical repentance.

Finally, on “I’m Not The Enemy” ricochet guitar riffs connect with prowling bass lines and a boomerang beat. The tension ratchets as Jeff declares “I’m tired of being lonely…I’m tired of being lazy” and a blitzkrieg guitar attack strafes over a triple time tattoo.

The softer side of the Well Wishers is displayed on two songs, “Ways And Means” and “Arrogance Is Gone.” The former fuses rippling acoustic guitar to a tick-tock beat. Taking an emotional inventory, Jeff’s plaintive vocals echo the honest approach of lyrics like “You were running away with the crowd and I was left to figure out the space between how and why.” A wash of sweet keys and ringing guitar riffs accentuate this tender mea culpa.

On the latter, sun-dappled acoustic runs lattice over electric filigreed fretwork and a laid-back rhythm. contemplative and melancholy, the lyrics limn late-life frustrations and the creeping suspicion that we never quite measure up to our loved ones’ expectations; “I would like to be the son whose father brags to everyone about the fortune and the fame we made this year.”

Other interesting tracks include the aforementioned “Never Let You Down,” the Punk-tastic throb of “Is it Me? Is It You?” along with the brittle call to arms, “Come Out And Play.” The album closes with the cosmic exhale of “The New Fade Out.”

A View From Above recalls the classic crunch of Todd Rundgren, 20/20 and Dwight Twilley. It also manages to hold its own alongside new(er) standard bearers like the Posies, Fountains Of Wayne, the Soft Pack and the Empty Hearts. The Well Wishers’ music is full of brilliant colors and subtle textures. It almost sounds too good for this dirty world.