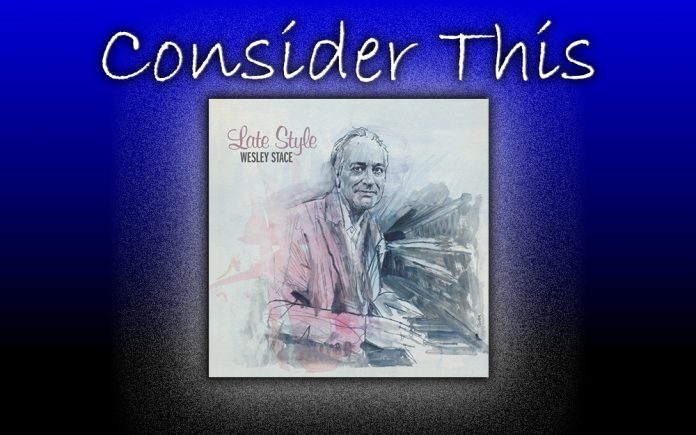 The first time I listened to Wes Stace’s newest opus, Late Style, I nearly swooned with delight. That measure of excitement is a rarity for a cynical, Bitch-Goddess such as myself.

Wesley Harding Stace first gained acclaim in the late ‘80s under his nom de Rock, John Wesley Harding, a sly reference to Bob Dylan’s 1967 record of the same name. Born in Hastings, East Sussex England, he came by his musical talent naturally, his dad played Jazz piano and his mom had been a mezzo-soprano opera singer. Both became teachers, Wes was heading down that path as well, until he began playing in local pubs at age 17.

Although he embraced academia, studying English Literature at Cambridge University, the siren song of music proved to great. He decided to take a hiatus from school and pursue a career in music. He figured he could always return to school if the music thing didn’t work out.

By the summer of 1988, he performed a set of original music at a gig in London. As luck would have it, some music industry folks were in attendance. Rather quickly, he began opening for the Hothouse Flowers in England and acclaimed singer-songwriter John Hiatt in America.

Rather than hunkering down in the studio to record his debut, Wesley signed a one-off deal with the U.K. label Demon and released a live effort, It Happened One Night. Recorded in the intimate Wheelhouse Club in London, the album served as an introduction to his protean songwriting skills. Noting his quick-witted wordplay, sharp social commentary and pure pop songcraft, critics were quick to compare him to antecedents like Elvis Costello, Bob Dylan and Nick Lowe. Major record labels took notice and he signed with Sire Records, home to The Ramones, The Pretenders, The Smiths and k.d. lang.

Wesley got a band together that he dubbed The Good Liars. It included bassist Bruce Thomas and drummer Pete Thomas (no relation). Both had been an integral part of Elvis Costello’s backing band, the Attractions (ensuring that the Costello comparisons would continue). Between 1989 and 1992, he recorded three albums for Sire, Here Comes The Groom, The Name Above The Title and Why We Fight. Each recorded garnered respectable reviews and modest sales. Unfortunately, Sire expected bigger things, and he was dropped.

Label woes never got him down and he continued to make music. Between 1992 and 2017 he released 14 studio albums, three EPs and five fan club recordings. He also embarked on a second career as a University Professor and has written four well-received novels. By 2013, he retired the John Wesley Harding moniker, recording his Self-Titled album as Wesley Stace. Putting a finer point on it, his follow-up long-player, a collaboration with Minneapolis alt.country pioneers The Jayhawks was entitled Wesley Stace’s John Wesley Harding.

Wesley began his newest album like any other, roughing out melodies and lyrics on an acoustic guitar. But the process felt rote, so he decided to shake it up a bit by enlisting David Nagler, who had acted as his musical director for Cabinet Of Wonders, the portable variety show he’d been performing on and off since 2009. The Brooklyn-based multi-instrumentalist and songwriter was definitely familiar with Wesley’s strengths. The result is Late Style, an effervescent effort that echoes West Coast Jazz, Latin rhythms and the British Sophisto-Soul-Pop mined in the ‘80s by bands like Prefab Sprout and The Style Council.

The album opens with the one-two punch of “Where The Bands Are” and “Everything All The Time.” The former is powered by authoritative piano runs, prowling bass lines, chugging guitars and a slipstitch beat. The slinky melody and sparkly arrangement shares some musical DNA with Ramsey Lewis’ iconic “The In-Crowd.” Mordant lyrics foment a serious case of FOMO; “You want to be where the bands are baby, you’d be the cat with the cream, right back where the bands are baby, not in line on the street, for the sad meet with a drummer who’s spent his per diem.”

It’s no accident that the album’s cover boasts a splendid watercolor of Wes at the piano, since the music contained herein is meant to evoke epochal records like Nat King Cole’s Love Is The Thing or Frank Sinatra’s All The Way. But he’s is never content to zig, if he can zag. Take the COVID caveat of “Do Nothing If You Can.” This four-on-the-floor groover leans closer to Barry White and his Love Unlimited Orchestra then, say, Frank and Nelson Riddle. Plucky guitars partner with thrumming bass and a thwocking beat as lyrics place caution tape around productivity during those hazy, lazy lockdown days; “Exercise restraint, don’t waste so much paint, here’s the plan: do nothing if you can.” Blushing, girl-group harmonies, lush vibraphone and hushed electric piano greet the chorus. Whispery vocals booked with syrupy strings on the break rendering the seduction a fait acompli.

Meanwhile, “Your Bright Future” unfurls like the best Blaxploitation theme you’ve never heard. Plinky keys connect with sultry piano, creamy strings, brawny bass lines and a kick-drum beat. A fractured romance gets the once over twice. Wes spins a yarn dense with narrative detail; “I was lost in the stars, but it came to a premature end, back to earth with a bump, I was jumped by your erstwhile boyfriend/Apparently someone isn’t quite sold on you and me babe, let’s put the bright future on hold.” The arrangement builds, layering in iridescent vibraphone, swooping string accents, and honeycombed keys, achieving a cinematic panorama.

The best tracks here wed erudite lyrics to melodies that effortlessly echo touchstones like Burt Bacharach, Brasil ’66, Harry Nilsson and Bob Dorough (best known to Gen. Xers as the musical polymath behind the Schoolhouse Rock! series). A syncopated drum salvo is quickly supplanted by jaunty Jazz piano and Wes’ deadpan vocals on “Well Done, Everyone.” His cheerful delivery nearly camouflage cutting and acerbic lyrics that take the world to task. The first verse includes a sly dig at the twice-impeached 45th President; “We’re no longer safe from the rays of the sun, well done, everyone! There’s always a cowboy out waving a gun, well done, everyone!/So much for progress, I hope we’re all pleased, the sad gods of Science will not be appeased, we let superstition control policy, we thought a madman might be fun, Well done, everyone!” Scatty backing vocals, pliant piano and a finger-popping beat burnishes an already insanely catchy melody, leading up to an almost optimistic final verse; “Nothing is perfect and nothing could be, we watch it eroding so gradually, sometimes you feel like you’re going insane, they move fast and break things, it’s so inhumane/But we won’t let ourselves get distracted again. it’s late but we’ll get it done, well done! Well done, everyone!

If the Beach Boys, Vince Guaraldi and the Free Design had ever collaborated, it might sound something like “The California Fix.” A sideways ode to the Golden State, it’s anchored by sun-dappled harmonies, painterly keys, vroom-y bass lines and a dropped backbeat. Wes ingenuously namechecks a number of Left Coast landmarks like Bob’s Big Boy, The Lamplighter Inn, Mission Delores and the Castro, as warm piano notes shade the chorus. But perhaps it’s all too much of a good thing; “California’s a Garden Of Eden, a paradise to live in or to see, but I found I was dreaming of Sweden, California just wasn’t for me.” Horns swell on the break, enveloping Charlie Brown-flavored piano and woozy keys.

Finally, “Come Back Yesterday” is a Baroque Pop pocket symphony that lands somewhere between The Partridge Family and The Left Banke. Willowy harpsichord notes are matched by glassy keys, shang-a-lang guitars, tensile bass and a crackling beat. The shiny, happy melody belies droll lyrics that weep for the present and pine for the (pre-2016) past; “Way back before Hitler, baby I think we were warned of it, how men who believe in nothing at all wear any clothes that fit/And they’ll cover up every crime they commit to delay the moment they… Oh! Come back yesterday.” A supersonic harpsichord solo on the break nearly spins out of control. The final verse is accompanied by some vigorous ooh-la-la-la-la harmonies, before the song quietly powers down with a tender piano coda.

Other interesting tracks include the percolating Hollywood angst of “Hey! Director.” On “The Impossible She,” a sleek arrangement is mirrored by lithe instrumentation and buoyant vocals that recall Donald Fagen’s first solo outing. Then there’s the deft Tropicalia of “All The Yous.” The album closer, “How You All Work Me,” is a back-to-basics nod to Wes’ typical modus operandi.

Acoustic and vaguely autobiographical, the arrangement is bare-bones and Dylanesque, a cranky diatribe in ¾ time. Lyrics limn real life as Wes mockingly complains; “You make me write songs, look, I’m writing on now, they sometimes take days but I manage somehow/And then you accuse me of being highbrow, it was you who demanded I make my voice heard, how you all work me.” As he bemoans a packed schedule of writing, recording, touring and his literary pursuits, whooshy organ notes and jangly guitars underscore his tale of woe. By the final verse, he’s reverse coursed; “I’d rather be quiet and calm and alone, away from the tumult, much less well-known, by the fire with my family, relaxing at home/But if I sit still for ten minutes, it hurts, so I send up the signal, cos I’m on alert, how you all work me, how you all work me.” It’s a playful finish to an amazing record.

Produced by David Nagler and Chris Von Sneidern, the album includes the talents of Brian J. Campbell on saxophone, Danny Cao on trumpet, Mauro Refosco on percussion and the legendary Prairie Prince on drums. Kelly Hogan and Nora O’Connor provided harmony vocals and Chris Von Sneidern added electric guitar. David Nagler is the project’s MVP, playing keys, acoustic guitars and all virtual instruments. All Wes had to do was show up and sing and add a bit of whistling.

By taking a huge leap out of his comfort zone, Wes Stace has created a Pop masterpiece. By turns fizzy and pithy, sunny and swoony. I love this record. You will too.