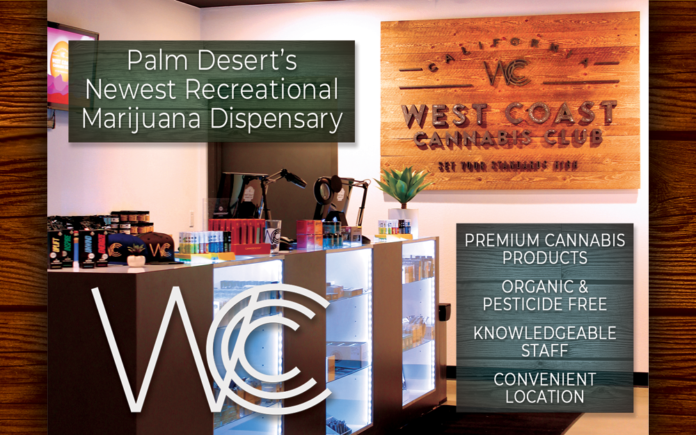 On Friday, December 7, the Palm Desert Chamber cut the ribbon at the grand opening of Palm Desert dispensary, the West Coast Cannabis Club. While dispensaries throughout the Coachella Valley abound, particularly in Cathedral City, this is among the first in Palm Desert. Located on Highway 111 and Deep Canyon, this 1,200 square foot retail store is the brainchild of owner Kenneth Churchill. Since opening in Cathedral City in 2016, WCCC has grown rapidly, first expanding to its Highway 111 location, with another 28,000 square foot space in the old KESQ building on Cook still being renovated which will hopefully be open in eight months. The second space will be a completely integrated business with everything from cultivation of marijuana to retail, and everything in between (aside from testing). There are even plans to possibly expand WCCC to San Luis Obispo, but for now, Churchill is loving the Coachella Valley and the West Coast Cannabis Club has found a perfect home here. 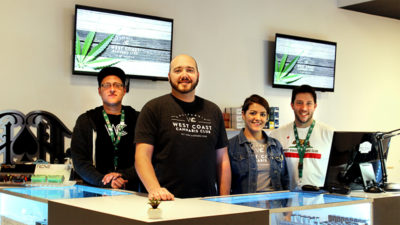 It’s fitting that owner, Kenneth Churchill, is from Colorado, the state that’s been at the very forefront of the legalization of medicinal and recreational. Growing up, Kenneth’s ambitions regarding cannabis were similar to most young Coloradans – smoking it. Through his entrepreneurial spirit, determination, and many sacrifices, he eventually turned that casual hobby into a thriving business he is passionate about. After starting college at the University of Nebraska at Kearney to play football, Kenneth graduated from the University of Nebraska-Lincoln with a business degree. He’d been working in the restaurant business all throughout college and beyond, and was ready to leave the 80-hour a week grind for something more meaningful to him. He moved to San Diego and started doing cannabis delivery, which was an easy introductory way for him to get into the business. Said Churchill, “I’ve always wanted to have my own business, but didn’t really know what that would be. I just tried to hustle any way I could. Once I turned 26, I’d been working in corporate restaurants since college and knew that wasn’t at all what I saw for myself. So I had to ask what kind of a business could I start at 27 with no money…and cannabis gave us pretty interesting option. Unfortunately, I had experienced a lot of people close to me using cannabis and CBD oil to deal with cancer and other medical issues. The stories they told me about how these cannabis products helped them touched me. I saw an opportunity to make an impact on a new market and new industry.”

Churchill’s childhood friends helped out to make his dream a reality. One friend opened his home – particularly his couch – to him in the early San Diego days. Another friend scraped together the $10,000 Churchill needed to get his business started. “It’s been a completely emotional rollercoaster. The first year was rough! I had to stay with friends rent-free because they knew what I was doing and they believed in it, so they let me couch surf. My friend Josh, who gave me the loan, has a Master’s in business from the University of Denver. Tom, whose couch I slept on, has a construction background and has been a project manager on many large-scale jobs. We’ve all also been smoking since we were younger. It’s unique in the regard that we can sit in a room of growers or financiers alike, we are well-versed in every aspect of the business.” 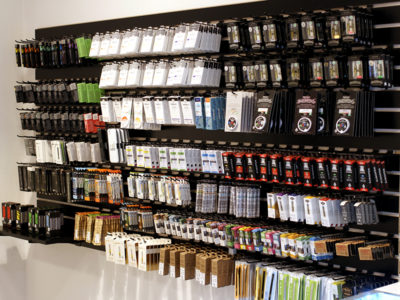 Since then, West Coast Cannabis Club has the distinct honor of having the first legal sale of recreational marijuana in California on January 1, 2018 at 6:00 am at their Cathedral City store. These are not simply cannabis retail stores in industrial areas, they work hard at being a part of the community in the Coachella Valley. They aim to be more of neighborhood stores. Says Churchill, “We’re big sponsors for the Family YMCA of the Desert as well as a lot of local charities. We try to put our stores in the middle of neighborhoods. Our Cathedral City shop is right by Stater Bros. and in the heart of a neighborhood. A lot of other companies are really trying to focus on becoming a big brand and not as much focusing on the people who live in the communities they serve.” 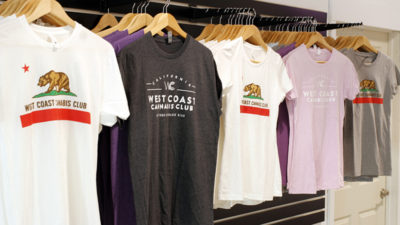 Whether you have medical or recreational reasons to visit West Coast Cannabis Club, you’ll find more than just weed. As Churchill tells it, “We have every kind of edible. There are topicals and tinctures that focus on pain relief and sleep. We work hard to create environment where everyone feels comfortable. This is a mass retail product, no longer a niche stoner product.”