One of the coolest dudes in the desert is John Stanley King and the big news is he is finally, finally coming out with another CD. This will be a mix of his originals and some remakes of classics. He’s particularly happy with his version of “I’ve Got You Under My Skin.” In a twist he decided to record it with a bossa nova beat, but his band members on his Friday night gig at Vicky’s of Sante Fe are R&B guys that have played with The Gap Band and Janet Jackson. What started as Bossa Nova ended up with a funky R&B sound with lush strings. I can’t wait to hear it. The CD is recorded organically (recorded with everyone playing at once together).

He said it will be available in a couple of months. Let’s hope he stores the master somewhere other than underneath his car seat (true story). I’ve been a big fan of John’s for many years now and we’ve spent many an evening listening to him strumming his way into our hearts.

The other big news is that he is now the musical director at Vicyi’s of Sante Fe in Indian Wells. Vicky’s has upped the ante for local music, which is so appreciated. It’s become the real home for jazz in the desert. They are supporting a total of 35 musicians a week from their locale.  Kudos to them! John now performs with a 6 piece band.

On Friday nights it’s his originals and some R&B, Boz Skaggs, and some dance music. Sundays he does his Sinatra repertoire with a grand piano and the bands in suits. He calls it ‘Blue Note’ style jazz.

He’s also filled the calendar for Vicky’s for the season with some great artists. Monday and Tuesday’s its Mike Costley. Wednesday it’s Barry Minniefield, Thursday nights Carolyn Martinez plays a bossa mix and standards with her 5 piece band including Craig Chesnut on drums. Saturday nights it’s Rose Mallet and Barney Mc Clure from 5:30 – 7:00 and Kal David and Lauri Bono from 7:30-11:00. It’s “Meet the Corwins” Fridays 5:30 to 7:30.

You can also catch up with John at the other gigs he’s doing. On Monday nights he does “Conversation Acoustic” at the Corktree. I asked him if it’s a solo. His reply “I’ve never done a gig by myself.”

Wednesday nights he’s on the veranda at the Hyatt in Indian Wells from 5:00-9:00 with a band including Andrew Ford on bass (one of my favorites). 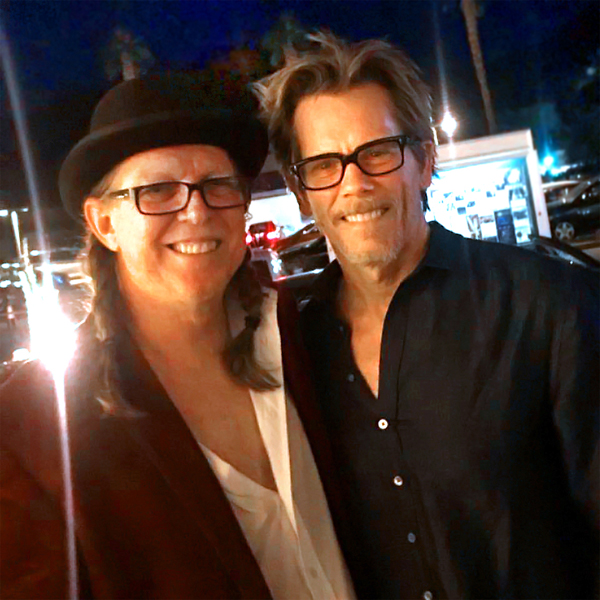 Thursday nights you can sit under the stars amongst the fire pits and listen to him at the Blue Ember in Rancho Mirage.

John has been a stable presence in the Coachella Valley for 30 years. He brings a unique version of a variety of music in a casual easy style. He mentioned that he has people sit in with him.

Just last week he had a surprise celebrity stop by – Kevin Bacon (pictured).

A new season is on the horizon and with it, the best line up of jazz we’ve seen in many years. John Stanley King is one of those people helping to bring it about.