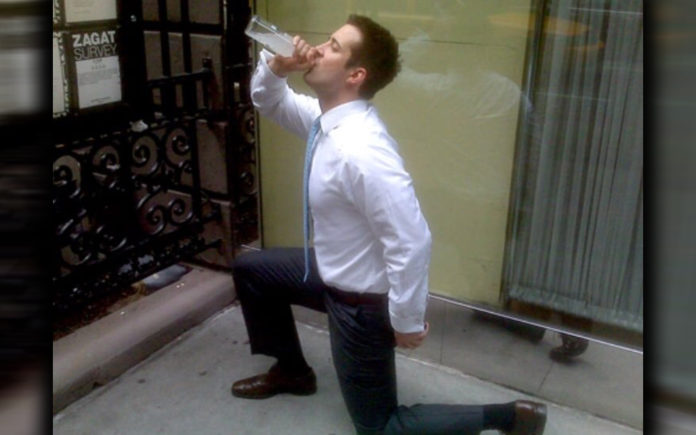 Good god almighty, trying to remember the waning, dark days of the no-fun 90’s is like an exercise in reliving past trauma. If you had to summarize the ghastliness of 1999, it would be with JNKO jeans, velour track suits, bucket hats, dudes with platinum frosted tips, chicks with blue sparkly eyeliner, and Puff Daddy ruling the charts despite having less talent than a Muppet in a Glad bag, dancing in front of a fish eye lens (or as you probably call her, Missy Elliot). People were paying money to see Limp Bizkit cover George Michael badly, George Michael was behaving badly in public bathrooms, and millennials were a bunch of high school aged derelicts getting “Girls Gone Wild” style wasted off of SMIRNOFF ICE for cremini’s sake. The meteoric rise and fall of Zima had shown the fledgling flavored-malt-beverage industry that the public was willing to embrace an alternative to beer and wine as long as it didn’t taste like it was made in the toilet tank of cellblock #9 (here’s looking at you, Zima), and didn’t look like something the un-coolest person you knew would be drinking. Using the same marketing and branding logo as found on Smirnoff vodka bottles, product familiarity helped Smirnoff Ice to garner a fanbase with women, college students, and eventually…bros.

Sure-sure, Smirnoff Ice was an instant hit out the gate amongst people that liked the idea of alcohol flavored soda. The 4.5% ABV opaque treat had a cloyingly sweet, citrusy flavor that tasted like Squirt with a medicinal kick. And despite the company rolling out Smirnoff Black in 2005 (a crystal clear, dry, 7% ABV incarnation of the semi-soft drink), the brand began its inevitable wane in popularity, being consumed pretty much only by insufferable bachelorette parties and people who listened to edgy music like Fallout Boy and Dashboard Confessional ( bands that could rot your sense of taste as quickly as Smirnoff rotted your guts) by the end of 1998. By this point, everyone had moved on to more liver-wrecking fare like Four Loko and Tilt, which at least gave you a solid head-change to go with the dreadful flavor. But in 2010, Smirnoff Ice was set for a comeback, when the advent of viral challenges turned the malternative beverage into a game called “Icing”.

Apparently, drinking a Smirnoff Ice was so revolting and shameful that it became a drinking game (actually a hazing ritual, but I digress) around college campuses, apartment complexes, beer pong halls, and anywhere else bros are known to congregate in their waking hours. The rules of the game were simple; if you present someone with a Smirnoff Ice and announce, “You been Iced, bro!”, they must either block the challenge by having a Smirnoff Ice already on hand, or drop to a knee, and chug the entire bottle as given. Now, if the person presenting the Ice was blocked by another Ice, then he/she must be the one to instead drop to their knees, and chug BOTH bottles of Ice. While this was the basic gist, challenging someone with an Ice at extremely inopportune moments became the point. Running late for meetings, studying for exams, proposing to significant others, delivering newborn babies, no moment was safe from being Iced. If you could find elaborate, indirect and overcomplicated way to deliver the drink, all the better. If I tell you that YouTube is filled with videos of “Bros Icing Bros” it’s only because people still occasionally upload themselves playing the game almost a decade after its initial heyday.

Smirnoff’s parent company, Diageo, released a statement denying that they had been the ones to create the viral game in order to boost slumping sales, the company even warning consumers to drink responsibly while Icing the dignity out of each other. Diageo used this momentum to push the Smirnoff band back into the mainstream, releasing a cavalcade of fruity flavors such as Watermelon Mimosa, Screwdriver, Peach Bellini, Margarita, and whatever flavor Red White and Berry is. Other Smirnoff Ice flavors currently include Cherry Lime, Lemon Lime, Pineapple Coconut, and the perennial pairing of Black Cherry. Once considered a feminine drink, flavored alcoholic beverages became an ironically cool thing to consume after the Icing phenomena, a product so bad, that it’s good. With Mike’s Hard Lemonade and Angry Orchard both debuting in the 2010s to fantastic sales, the social stigma around this genre of drink was all but dissipating in the minds of 21-35 year old males. Alcopop drinks were becoming cool to drink, an alternative to craft beer, which was slowly becoming commandeered by elitist, gatekeeping nerds who fetishized stouts and IPAs as a precious social currency. The stage was slowly being set for the arrival and market domination of the hard seltzer, as well as the new breed of drinker that it spawned; the Clawcasian.