Theatrical producer, Jay Kholos, brings the critically acclaimed one-man play Wiesenthal to the Riverside Theater stage at the UCR Palm Desert Campus on Saturday March 9, at 7:30 p.m.  The internationally acclaimed actor and playwright Tom Dugan portrays Nazi hunter, Simon Wiesenthal, during its Off Broadway engagement. Wiesenthal is the famed concentration camp survivor who made it his life-long pursuit to bring over 1,100 Nazi war criminals to justice.

The 90-minute play relates the details of a few of Wiesenthal’s investigations. Among them are the pursuit of Franz Stangl, the former commandant of the Treblinka death camp, arrested in Brazil in 1967 and sentenced to life imprisonment for the mass murder of 900,000 people; Adolf Eichmann, a major organizer of the Holocaust, arrested in Argentina and hanged in 1962 in Israel; and, when challenged by Austrian Holocaust deniers to prove that Anne Frank actually existed, he tracked down Karl Josef Silberbauer, the officer who arrested Anne Frank and her family sending them to concentration camps. 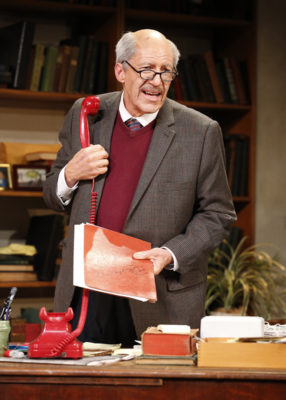 Written by and starring Tom Dugan, he researched Wiesenthal’s character and conducted worldwide searches for war criminals for a year to write this play that has gone from Broadway to across the United States, and Canada. Wiesenthal has been hailed as “masterful” by Backstage, “authoritative and engaging” by the LA Times, and “most eloquent” by LA Weekly. Dugan received the Los Angeles Drama Critics Circle Award for Best Solo Performance and the New York Outer Critics Circle Award for Wiesenthal, and also earned several Los Angeles Ovation Award nominations.

“While Wiesenthal is known for dedicating his life to memorializing the millions of Jews who were killed in concentration camps by hunting down their murderers, many people are still not so familiar with the justice he served,” said Jay Kholos, Producer, with North American performances scheduled in over 150 venues for 2019. “This is a powerful and compelling production that takes the audience beyond history books to better understand some of the complexities of the aftermath of the Holocaust.”

While Wiesenthal was able to identify over 22,000 Nazis presumed still alive after the war, he was able to get trials on only five percent of his quest. Wiesenthal founded the Jewish Historical Documentation Centre in Linz, Austria, for gathering information for future war crime trials and aiding refugees in their search for lost relatives. He opened the Documentation Centre of the Association of Jewish Victims of the Nazi Regime in Vienna in 1961 in efforts to locate missing Nazi war criminals. Wiesenthal died in his sleep at age 96 in Vienna on Sept. 20, 2005. The Simon Wiesenthal Center (a Jewish human rights organization known for its determined hunting of former Nazis), located in Los Angeles, is named in his honor.

Immediately following the performance, actor/writer Tom Dugan and a representative of the Simon Wiesenthal Foundation will conduct an engaging post show Q&A.

Tickets for the performance are $55. To purchase tickets visit www.wiesenthaltheshow.com,or call 1-866-811-4111. The Riverside Theatre is located on the UCR Palm Desert Campus at 75080 Frank Sinatra Dr., in Palm Desert.