CVW: You perform in brightener. Please tell us how long the band has been together? Current members? How the band started?

Sturgeon: “I’m constantly writing and recording music, whether for myself or for other people. So brightener started in 2012 as an official outlet for my solo project songs, and has gone through a few lineup changes for the band over the years. But since 2016, the Coachella Valley live band lineup has been Raefer Finnegan on bass guitar, Elias Texel on drums, Michael Santella on guitar and vocals, and myself on guitar and vocals.”

CVW: You also do a lot of collaborating with the Flusters. Tell us what it means to you to work with these musicians.

Sturgeon: “The Flusters were the first people to ever fully trust my producorial instincts and hire me as a producer for their first EP, which turned into me performing with them as a Fluster at Coachella in 2016 and collaborating with them as a producer and keyboardist on their second EP too. It means a lot to me to lift up different musical voices and I think The Flusters and Dougie do that particularly well in our valley and music scene so I’m always happy to be working and jamming with them.”

CVW: The AMP Showcase this weekend was fantastic. Tell us how it came about that you got involved and our now the Director?

Sturgeon: “Thank you! I try not to be too biased, but I thought it was really a fantastic show. I heard about AMP before the first summer camp in 2015 and knew that was something I needed to be involved in, so I came onto the organization as a volunteer. The next year there was a need for new leadership and the AMP Board of Directors decided to trust me and a colleague to put on the next year’s camp and develop our year-round program. At the end of last year, I took over as Executive Director of the program and love it – it’s really a dream job for me.”

CVW: What does it mean to you to work with these kids? Please feel free to share some stories about this.

Sturgeon: “I grew up in the Coachella Valley, jamming on Zeppelin with my friends in the breaks between jazz band. To have a community of students from around the valley who I could write with, play the music that I like with, and perform with, would have meant the world to me and I have no idea where I would be musically now if I had that. So I see a lot of myself in the students who are here at AMP and feel very connected to them. Watching them grow up as musicians and as people before my eyes has been a great joy for me. In particular, I remember one girl coming into AMP a few years ago as a very shy and meek and uncomfortable student. Now she wears spiky boots and absolutely kills it onstage. It’s these kinds of transformations that make all the hard work worth it.”

CVW: Please tell us about CDs you have recorded and if you are currently working on new material?

Sturgeon: “I also run The Sturdio where I produce, engineer, record, and mix local artists’ records, and was honored by the readers of CV Weekly with the Best Producer award earlier this year. I’m currently working with Lance Riebsomer and David Morales on their acoustic(-ish) EP project, The Sieve and The Saddle (Morgan James and Johnny Carmona) on their debut album, Israel Pinedo (a former AMP student) on his debut EP, a few songs with Eevaan Tre, and with a handful of other artists. Not enough time in the day!”

CVW:  Is it as rewarding producing other people compared to working on brightener stuff?

Sturgeon: “I’ve been loving it. I will always need to produce my own music, but sometimes that gets a bit isolating and I love the collaboration that comes with working with other artists and lifting up their voices and perspectives. Just being a part of something that is meaningful to someone else and getting it to where they want it is completely rewarding. I’ll admit that it can get a little stressful to work a full-time job, be in brightener, and also produce other people’s records, but I love having all of these opportunities and am going to take advantage of them while I can.”

CVW: What is in the future for brightener?

Sturgeon: “brightener released a record last year (Headroom) and did a tour, and I kind of took a little time off from writing (I’ve got a couple other things going on…). Now that AMP Camp is done for the summer, I’m hoping to get a little time in between my other projects to write more and explore the new sounds and approaches I’ve been getting into lately. New music probably won’t be out for a little bit as I figure out the next step, but I really like the new stuff I’ve been working on. brightener has a few local and LA shows in the next few months that you can find on our Facebook.”

Sturgeon: “It’s definitely not my most popular song, but the brightener song I have the most affection for currently is “Help U Better Then.” It just really twists my guts around everytime I listen to it still. It’s about trying to be a good partner in a long-distance relationship.” 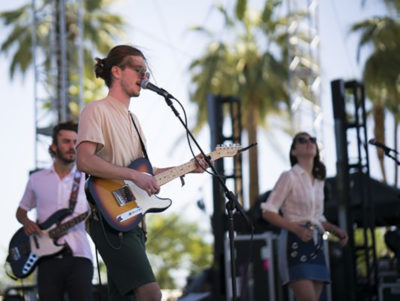 Sturgeon: “There’s a great venue in LA called the Hi Hat that I think is fantastic. Big Rock Pub is a great local venue that is super supportive of the local music scene, which I really appreciate. brightener got to play a set at the Outdoor Theatre at Coachella 2016, which is a stage I’ve seen a lot of formative shows at so that was incredible to play on that stage (though I would have dialed in my monitors better next time…)”

Sturgeon: “Playing Coachella 2016 as brightener. brightener is a project that really is an expression of myself and my own musical instinct, and it’s not hard to understand how much the Coachella festival means to a songwriter growing up in the Coachella Valley. It was one of a few life goals of mine to play my hometown festival, so that was a particularly meaningful point for me in music.”

Sturgeon: “I think that everyone should develop their own definition of success in the music business. My two life goals about a decade ago were to: 1) play Coachella festival; and 2) make a living off of making music. In the past few years I’ve been very fortunate to hit those goals, so currently defining new definitions of success for myself!”

Sturgeon: “I love too much music to list, but here are a just few artists who I love and probably influence me greatly: The Beatles, Fleetwood Mac, Tame Impala, Forth Wanderers, Vulfpeck, Sufjan Stevens, pop-punk from my teenage years…too many!”

Sturgeon: “Been listening to a lot of Tom Misch, War on Drugs, Khruangbin, Drake, again…lots more.”

Sturgeon: “I want to work with a lot of people, just not enough time! On top of any dream list I may have, I want to work more with my friend Alex Rogers, who helps lead a great great band in LA called Family Hahas. We have a really similar and complimentary style of music-making and I hope we can find some more time to work together.”

Sturgeon: “I love the way that Vulfpeck handles their digital/release strategy, I think it’s very smart and funny and cutting edge and accessible (and effective!). I also think my friends in Cheekface have an incredibly effective release strategy for an indie band and I love watching them roll out new songs.”

Sturgeon: “I’ve only grown up on digital platforms, so I haven’t had to go through the difficult transition from hard copies to digital. One of the newest challenges is just getting people to give time to your music – the attention economy is real and musicians have to have a great strategy for getting their music in front of people. Unfortunately, not all musicians (myself included) have a natural tendency for that, so that’s another aspect of work that has to be done as a musician.”

How do you feel the CV Music scene has changed over the last 10 years?

Sturgeon: “I have only been back in the Coachella Valley for about 3 years (after living here till I was 16 years old), so I’m not the most qualified to speak on that. I’m VERY excited for the next 10 years, as our AMP students and community gets more mature and takes over our music scene. I’m happy to have played a hand in that future community and change!”

Sturgeon: “Ok, not thinking about it as a business strategy but purely a selfish pick: Tom Misch, War on Drugs, Khruangbin.”

Sturgeon: “I don’t know much country, but our AMP students have played for the past three years at Stagecoach so I’m gunning for AMP headlining!!”

Sturgeon: “Led Zeppelin, Fleetwood Mac, and then get back at me when Goldenvoice learns how to pull off the reincarnations of a few other artists.”

CVW: What did it mean for you to win the CV Music Award for Best Producer this year?

Sturgeon: “Producing is something that I always thought I could do but didn’t really start doing with seriousness until last year. It was reassuring for my peers to recognize me as not only being able to do that, but being able to do it well. I’m still trying to hone in my skills and work on a variety of different projects moving forward so I’m hoping some of that recognition will translate into more projects that I can collaborate on!”