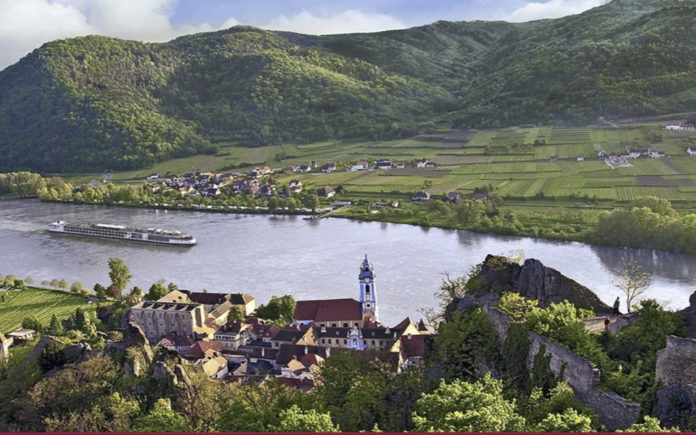 I’ve been so fortunate to visit most of the wine regions around the world throughout my life, with the exception of Australia, New Zealand and South Africa.  I hear from you vino lovers that kiwi-land is simply gorgeous and South Africa stunning—even though they’re suffering from a major drought.

Western European wine country I know well but I’ve never been to the “Central European Wine Country”.  And that would include Austria, the Czech Republic, and Hungary.  I’ve always been a fan of Austrian Gruner Veltliner and have enjoyed the famed Hungarian Tokajai and their herald Egri Bikaver, known in English as “Bulls Blood”.  It was something I drank early in my wine career.  As to the Czech Republic, I’ve always loved their lager beers—and now in my later years, I’ve come to hear about their wines as well.

Therefore—the time is nigh, and I better get out to the wine country of these countries to taste live in real time.  So—I know of no other romantic way to treat my deserving wife than to cruise down the Danube River to soak up the sights & sounds, the food and wine, as we travel through the countries of Germany, Austria, Slovakia & Hungary.

And the last time we wrote about the French Open tennis tournament at Roland Garros was four years ago.  Since we’ll be in town right after our stay in Budapest, let’s get ourselves up to speed at the 2019 tournament on the red clay; we’ll be covering the quick wine of choice at the Paris bistros: Beaujolais baby!! Cheers!

The longest river in the European Union, the Danube River is the second-longest river in Europe after Russia’s Volga. It begins in the Black Forest region of Germany and runs through 10 countries (Germany, Austria, Slovakia, Hungary, Croatia, Serbia, Romania, Bulgaria, Moldova and Ukraine) on its way to the Black Sea.

Historically, during the 7th century BC, Greek sailors reached the lower Danube and sailed upstream, conducting a brisk trade. They were familiar with the whole of the river’s lower course.  Particularly interesting is the fact that the Danube served as the northern boundary of the vast Roman Empire.

Although we’re first landing in Prague for three days, we will be shuttled through Bavaria and the Black Forest to Nuremberg where we will begin our Danube River cruise. Most people think of Bavaria and its beer—and we’ll be drinking our share.

However, Nuremburg is about 60 miles south of Franconia.  And I’ve had some Franken Ice Wine that blew my socks off! The Nuremberg wine bars are on our radar!

The Franken grape, Silvaner, magically produces a white wine of crackling intensity.  Made from a hybrid of the Riesling and Silvaner grape, a late-harvest ice vine (one made from desiccated grapes left on the vine and harvested on the first frost of the winter) from this hybrid, produces a wine with searing acidity within sweet fruit surroundings.  A bucket-list wine for certain. 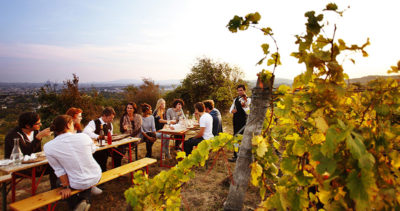 As mentioned, we are beginning our European wine tour in the City of Prague. Something to note: Most capitals or even cities within their limits do not have many vineyards.   At one time, Prague had more vines than any major town in Europe.  Then the city of Paris, around Monmartre, enjoyed a large patch of vines—Le Vin de Paris. However, no capital city is as intimate with wine as Vienna, one of our next destinations, where more than 1700 acres of vineyards still hold their ground right up to the tramlines within the heart of the residential districts and surge up the sides of the local hills into the woodlands.

Like Verona’s VinItaly, Vienna, as well, has a famous wine fair, VieVinum.  Held in the grandeur of the imperial palace, this unusually elegant affair also features the delicate stemware from the famed Austrian company that this column often writes of, Riedel wine glasses.

Vienna, called “The city of dreams” because Freud lived there. Vienna is also known as “The city of music” because it had a great influence on classical music.  But because of its city vineyards and a new generation of winemakers and wine bar owners, it’s been named the “The city of wine”.

Most of Vienna’s wine is drunk as Heurige, (pronounced somewhat as “hor-ti-ga”) which actually translates as “this year’s wine”, but over time it also refers to the wine taverns where local winemakers come to serve their freshest wine.  Wine guy Hugh Johnson has written, “Every vintner seems to be a tavernkeeper too, and chalks up on the board the wines and their modest prices, to be drunk on the spot or carried away.  Good Heurige is sensational; spirited, sprightly stuff which goes straight to your head.”

A feature of Viennese vineyards for centuries, the Gemischter Satz is now experiencing a genuine renaissance at these Heurige. A Gemischter Satz is a wine made from a variety of grapes, up to 20 different grape varieties, which are planted in the same vineyard, and harvested and pressed together. This is in contrast to a cuvee, which is a wine made from and blended from different vats. Originally, growers used the varying degrees of ripeness and acidity as a way to ensure consistent quality and guard against the risk of poor harvests.

The description “Wiener Gemischte Satz” has since become regulated in law and may only be used for wines that have been pressed from at least three grape varieties from a vineyard in Vienna.

We hear there are many cozy wine taverns in Vienna, and, we’re even scheduled to attend a “Heurigen Evening Tasting”.  Looking forward to that!  Prost!