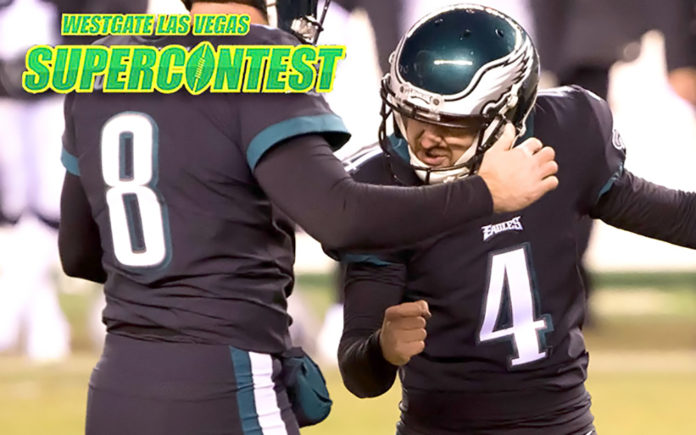 Westgate Las Vegas SuperContest winner GRANNYS BOY took down the $1.3 million first place prize on Sunday after capturing the lead in Week 12 in the “ultimate” NFL sports betting contest, and holding it until the end of the 2017 NFL regular season.

On Sunday after the Lions (-6.5) whipped the Packers in a pretty sweat-free affair, GRANNYS BOY only needed one cover among his four selections in the late slate of games (starting 4:25 pm ET). The Bills, now BFF’s with the Cincinnati Bengals, looked to provide the clincher but the Falcons (-3.5) finished off the Panthers 22-10 sooner, punching their own playoffs ticket in the process.

Picks made in the last week of the Westgate Las Vegas Superbook’s SuperContest rightly draw the most attention, deciding who comes away the big winner. That was perhaps magnified in this inaugural year of SuperContest Gold, which has the same format of five NFL picks per week against the spread, for 17 weeks, but with one big caveat: winner takes all in the $5,000-per-entrant event.

The Stag Capital team – three longtime friends who first met as Division III football players at Claremont McKenna College in California – held a half-point lead over second-place Midwest Square heading into the final regular-season Sunday. Both contestants went 4-1 in the final week, so Stag Capital had to have all four of those wins to snare the entirety of the $470,000 prize.

But if you ask Chris Lewert and his fellow Stag Capital teammates Mike Hall and Andy Traba, they’ll tell you it was the last game of Week 16 that saved this trio’s bacon in the 94-entrant contest.

“Philly and the Raiders on Christmas night,” Lewert said to Tilted Sports Media. “The only way we win is if Philly comes up with a magical six points.”

It was a sloppily played game throughout, and Lewert actually gave up on it while spending time with extended family to wrap up a holiday in the Phoenix area. Traba, at home in Chicago, was tuned in.

The Eagles made a field goal with 22 seconds left to take a 13-10 lead, still seemingly hopeless to cover the spread of 8.5. But on the ensuing possession, the Raiders faced fourth-and-10 on the last play of the game and tried a couple laterals to keep that play alive.

But Eagles defensive end Derek Barnett got a scoop-and-score on the play, giving Philadelphia a 19-10 win and Stag Capital an extremely improbable cover. Traba recorded video of the play on his phone and shared it with Lewert.

“We had Philly -8.5. Without those 6 points, it’s an L,” Lewert said. “It was a literal Christmas miracle. Shock is the best description. We couldn’t believe it happened.”

Contestant BrettFavre44 probably couldn’t believe it either. That entry had the Raiders +8.5 and would have been in first place heading into Week 17, if not for that play. Instead, that contestant dropped to fourth place and had to completely alter the Week 17 strategy – since, again, this was a winner-take-all contest – leading to a 2-3 final week and a fifth-place finish.

“That point made all the difference,” Lewert said. “Otherwise, we have BrettFavre’s picks, and he has ours. You’d be talking to him right now.”

Instead, the buddies from coast to coast – Lewert in L.A., Traba in Chicago and Hall in New York – got the big payout, with an assist from the FootballContest.com proxy service here in Vegas, in order to get all those picks in. Including that one pick that made the impossible seem possible.

“It’s definitely surreal to have it happen,” Lewert said, noting that the trio entered the standard SuperContest the past few years, along with other contests around town. “It’s one of those things where even when you’re close, you’re saying, ‘This is nice, this is nice.’ Then, ‘When’s this gonna be over.’ Then, ‘Oh my god, we won!’”