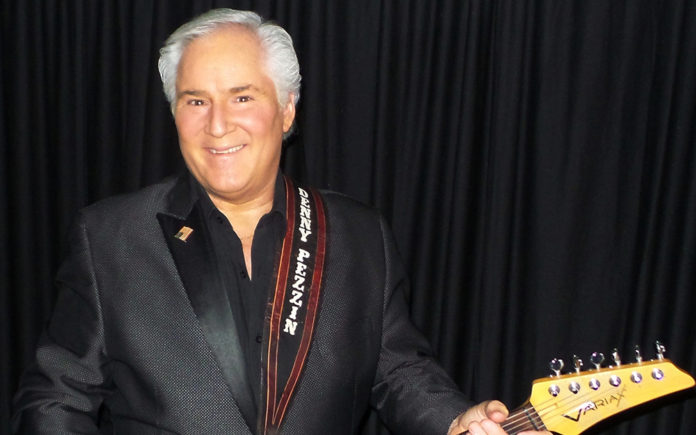 Join vocalist, guitarist and pianist, Denny Pezzin, celebrate the release of his new CD entitled, “Your Requests” this Thursday, Friday and Saturday at 7 p.m. in the Picasso Lounge at Chef George’s Picasso Restaurant, 40-100 Washington Street, Suite 125 in Bermuda Dunes. (760) 200-1768.

The owners of this establishment, George and Lana Ristich, are excited to introduce three new items to their Bar Menu for the celebration. The new items are Rib Eye Steak Picasso Way; Grilled Salmon with Saffron Rice and Picasso Chicken; along with inviting guests to try a shot of an Eastern European favorite plum whiskey called Schlivoica.

Born in Detroit, Michigan, and raised in Toledo, Ohio, Denny Pezzin was one of six children. He grew up listening to the coroners like; Frank Sinatra, Ed Ames, Vic Damone, and The Mills Brothers, but his influences also included The Beatles and his personal favorite, Elvis. His father enjoyed singing but didn’t show any real interest until after Pezzin started playing guitar at the age of thirteen. “My Dad put together a book of old songs like ‘Five Foot Two, Eyes of Blue’ and taught them to me and then on Sunday night, we would all sit around and sing together, while I played the guitar; that went on for about 2 years.” What a fond family memory.

He started performing when he was eighteen and became a favorite local entertainer. So popular, that when The Letterman came to perform in Toledo, they were told he was in the audience. “They called me up on the stage, put a guitar around my neck, and asked me to sing something and they would join in. I sang ‘And I Love You So’ by Perry Como and they came in on the chorus. It was just unbelievable. To this day, I remember it like it was yesterday.” He received a standing ovation and backstage, was given advice by Tony Butala to “stay in touch” but consider moving to Los Angeles.

Three months later, in 1978, Pezzin decided to make the move to Los Angeles. Within three weeks, he started working in Santa Monica, Santa Ana and other venues in Los Angeles and Orange County. He also managed to perform at the Tropicana Hotel in Las Vegas for two years, where he opened for Sam Butera. While there, he was asked by Butala to join The Letterman, but other obligations required him to decline.

In October of 2011, he and his wife moved to South West Florida to spend time with his father. Pezzin started performing in the area and his father enjoyed attending the shows with Virginia. His “Rockin’ The House Music” helped his father socialize after the loss of his wife; and after 3 1/2 years, they came back to California. His father is enjoying a happy and healthy life at age 87 and is still dancing.

They moved to The Four Seasons Terra Lago in Indio, in 2015; Five months later, he was Blessed to be the first Entertainer to perform at Chef George’s Picasso Lounge. Now in their third season, this year’s line-up includes; Michael D’Angelo every Tuesday; Johnny Meza every Wednesday with Pezzin every Thursday, Friday and Saturday from 7 – 10 p.m. In December, Lori Yeary will join the line-up and perform on Sunday.

On Wednesday, August 9, 2017, at 11 a.m., Pezzin packed up his gear and headed to Via Melodia Studios in La Quinta. “Johnny recorded me in his studio in his home and I brought all my equipment, set it up and plugged it into his AKAI system; We recorded every song, live and in a row; and they were all done with one take. I was very surprised. We did the recording in three days and he spent three weeks mixing and mastering. He also played bass on some of the songs and did a great job.”

Pezzin believes his performances are tied to his personal life. “I am happy in love with my wife, Virginia; She is my partner and is there for almost every show taking pictures of me with many of the guests in the audience.” Come on out for a Dennylicious weekend.