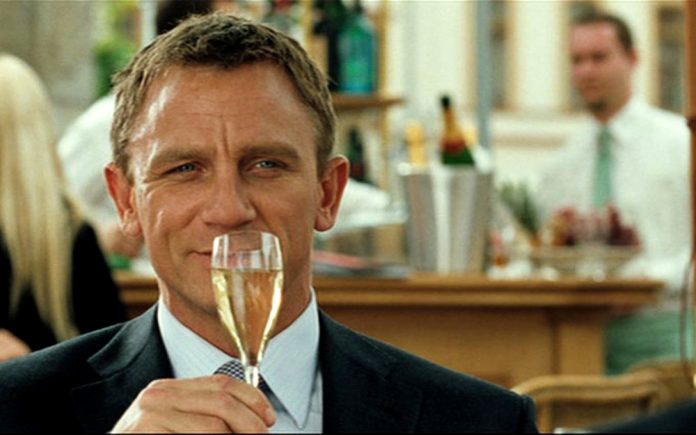 As we’ve all heard, Daniel Craig’s final outing as James Bond is here. The 25th movie in the James Bond franchise, No Time To Die (or Bond 25, which was its working title) is finally out after an almost two year delay due to the pandemic. And of course, the usual James Bond fervor is out and about—don’t tell anyone, but I may rent a tux and go as 007 at the next Halloween party: will I be the only one or will the party end up becoming a formal.

We all know that 007 is a great fan of the vodka-martini—“shaken not stirred”.  As to that “shaken” stuff, maybe not too much these days.  In one of Craig’s James Bond outings, when Bond orders a vodka-martini, the bartender asks if Bond wishes the silver libation to be shaken or stirred, Bond replies, “Does it look like I give a damn!” (I just saw Daniel Craig on Jimmy Kimmel the other night, and Craig said that in first take, Bond actually says, “Does it look like I give a f**k?!  They had to re-take the scene.)

However, famous of all the James Bond beverages is Champagne.  He and the ubiquitous Bond girls were never far from a bottle of fine bubbly!  Indeed, how many of us back in the day snicked in a “split” of Champagne into the movie to help share in the excitement of the film!

In the Sean Connery days, the Champagne of choice was Dom Pérignon. And specifically, Bond would always order up a 1954 Dom Pérignon. Rightly so—1954 was a stellar vintage year for Champagne.

But the reign of Dom Pérignon did not go beyond the 1970s.  After that decadent decade (I know—the 80s were the decadent years) Bollinger, became the official champagne of James Bond and the Queen of England—before she started making her own stuff. To welcome the release of the latest installment, the House of Bollinger has also released a vintage 007 Champagne to go with that Omega watch and BMW automobile.

But once in a while, it was cool to spot a different Champagne around the bedside whilst all the espionage was going on.  For instance, wasn’t that a chilled bottle of Taittinger outside of the sheets in From Russia With Love.  Les Grappes wrote, “Remember Russian agent Tatiana Romanova being coerced into drinking champagne by Colonel Rosa Klebb, SMERSH Head of Executions. For Klebb, the champagne was a cold-blooded, functional tool to trick Tatiana into accepting a fatal mission (‘this beautiful, guileless, innocent girl … must be loosened up’). For terrified Tatiana, the champagne was an object of suspicion, to be gulped nervously”.  Bond calmed her down.

But Bollinger has been the Champagne of choice for close to 40 years.

Unfortunately, I’m not as fortunate as CV Weekly’s movie reviewer Robin Simmons, who gets to watch the films before national release.  I haven’t seen No Time to Die, but we’re sure Bond is again enjoying chilled Champagne & Martinis at his desire.  Since Bollinger is still on the menu, please allow me to recommend a fine Champagne fit for 007: My notes are as follows:

Bollinger Brut Champagne La Grande Année 2012 ($175) 97 points. I forget now the occasion in which we opened the 1996 Grande Année, six years ago. But as we know, opening a great bottle of wine is the occasion. And the ‘96 Année was one of the best Champagnes I’ve ever had: Although its color was turning from bright to a touch darker hue, the liquid tasted fresh, complex, great mouth-feel and finish. We could tell that Champagne could age well for a couple decades. Bollinger makes great stuff.  With such a pedigree, let’s try the newly released Bollinger 2012 La Grande Année:

“I just read that the 2012 La Grande Année goes from zero to 60 right out of the gate, with an intense spine of acidity driving tightly meshed flavors of crushed black currant, ground coffee, candied grapefruit peel, and toasted almond. The profile expands on the palate, carried by the fine, raw silk-like mousse. Richly aromatic and expressive from start to lasting, spiced finish.”

In a later Bond movie, Sir James was on a cruise ship with, again, a rescued Bond-girl. Two Master Chefs personally served the couple with a fantastic meal and also provided a 1968 magnum of Champagne. The chefs can’t keep quiet but over-praise and tout the quality of the bottle. Unfortunately for them, Bond is well aware that the 1968 vintage was a wash-out, so he is put on sufficient notice. I think he went on to whack one of the chefs on the head with that same huge thick bottle.

Although, not a Champagne scene, every red wine enthusiast simply loves the sequence in the razor-sharp briskly paced Cold War thriller, the aforementioned James Bond movie From Russia with Love, where Bond is aboard the Orient Express and in the dining car with his recently rescued Tatiana Romanova.  Also sitting across from them at the table is the “false” British agent who does a great job selling his position until he commits a major faux pas. When asked what wine he wished to have with his fish, he calmly replies, “I’ll have a glass of Chianti”. Bond is immediately put on notice: no self-respecting representative in Her Majesty’s Secret Service would ever pair that wine to fish!  Cheers!