You might not have heard of Austin Hanks. But, if you own a television, chances are you’ve heard his music. For years, his songs scored seminal scenes in the Shakespearean biker drama, “Sons Of Anarchy.”

Austin was conceived in Dallas, Texas, but born in the foothills of the Appalachians in Alabama, and raised in Birmingham. His dad was such a Texas aficionado that his son was named for Stephen F. Austin, the founder of the Lone Star state.

Most of his family was in law enforcement, but Austin was bit by the music bug as a little kid. His dad sometimes worked security for concerts at the Civic Center in Birmingham. He usually tagged along, receiving a Classic Rock education from bands like Heart, Marshall Tucker and ZZ Top. He was immediately hooked. After seeing Boston in concert, he started his first band. He was in the 5th grade.

Fast-forward a few years and he began his music career in Nashville. His songwriting skills were readily apparent, and soon he was earning his keep as a songwriter for hire. 2005 saw the release of his solo debut, Salt Of The Earth. Not long after Austin pulled up stakes and relocated to Los Angeles.

Once in the City Of Angels, he fell in with a pack of like-minded pickers and players. Reconnecting with Nashville transplants like Tonya Watts and Travis Howard, he helped create a weekly songwriter round, “It Came From Nashville,” which was held at the legendary Hollywood Club, Genghis Cantina.

He found a niche in Los Angeles, playing as many tiny clubs as would have him. Soon Hollywood came calling. A music supervisor from a new FX drama had caught a live set and wanted to use Austin’s songs in the show. “Sons Of Anarchy” wasn’t some meathead escapism about biker outlaws, it was more like “Hamlet On Harleys,” full of angst and anti-heroes. An instant hit, the show completely raised his profile in the music and television industries.

When he wasn’t out on the road, Austin could be found holed up at one of L.A.’s best kept secrets, The Piano Bar. Situated in the corrosive heart of Hollywood, he set up weekly jam sessions featuring the Kalifornia Kingsnakes, an ad hoc collective that included famous and not-so-famous musicians. Getting together on Sundays, they would play whatever they wanted. It was here that Austin began to hone the songs that would appear on his newly released sophomore effort, Alabastard. 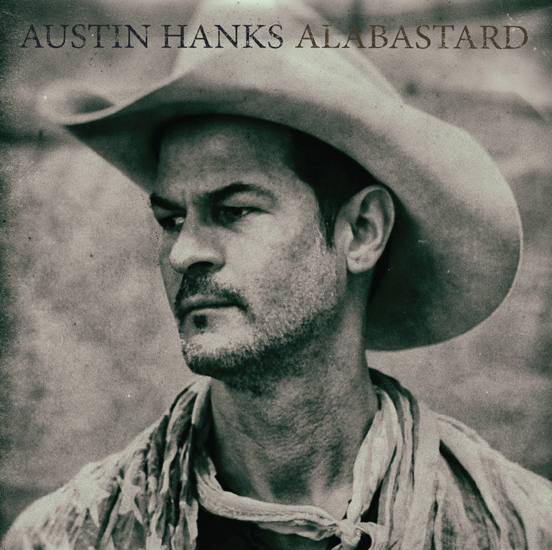 The album’s opening track, “The Toughest Part Of Me,” finds Austin ready to wear his heart on his sleeve. Sweetly soulful guitar ripples and arcs, underscoring the gritty ache in his voice. Baring his soul, he surveys the wreckage of an shattered relationship asking “Is this what you wanted, to leave me here haunted by the things you left behind/Wine glass stains, empty picture frames, and all that remains are memories of you.”

It’s clear that he has soaked up a plethora of influences, four songs, “Worth The Fight,” “Alive & United,” “Rise Above” and “Lakeside” go above and beyond the usual Classic Rock sources.

On “Worth The Fight,” he angles for a solid commitment after a casual assignation. “I shouldn’t push you, I don’t want to press my luck, but one more night is worth the fight.” The Country-tinged melody is propelled jangly guitar, swirly organ and tick-tock rhythm. The jaunty arrangement recalls British Invasion stalwarts like the Zombies. Conversely, the soaring lap steel solo on the instrumental break mirrors the laid back Laurel Canyon vibe of the Eagles.

“Alive & United” displays a deep affinity for the Muscle Shoals Soul, (probably second nature for this Alabama native).  A wistful recollection of his 19th summer, the instrumentation features serpentine guitar riffs, Hammond B3 and a punchy horn section. Surprisingly, the melody shares some musical DNA with “Tenderness On The Block,” a deep cut from Warren Zevon’s Excitable Boy album.

The defiant mission statement of “Rise Above” is a potent combo-platter of swampy, gutbucket Blues and Gospel grit. See-saw rhythms connect with wailing backing vocals, angular, double-tracked guitar and a wash of keys. Meanwhile, the raucous “Lakeside” extols the hedonistic pleasures of playing hooky. Anchored by rollicking, boogie-woogie piano runs, the Honky-Tonk melody is a loose-limbed doppelganger for Elvis Costello’s sly “Sulphur To Sugarcane.”

Back in the olden days, radio disc jockeys would boast of “all killer, no filler.” The same could be said for the songs on Alabastard, each one is kick-ass. But four tracks stand out from the pack. “Bone, Muscle & Blood” is a visceral celebration of the biological imperative. Over bottleneck riffs that spark and pinwheel, Austin boils life down to the essence; “We’re just bone, muscle and blood, looking for another part, trying to find the perfect heart.”

“Savior Self” harnesses the same snarled power chords Jimi Hendrix employed on “If 6 Were 9.” Over a leapfrog rhythm, lush Hammond B3 colors and roiling bass, Austin offers no excuses; “I try to play the cards I’m dealt, ones I know so well/I’m never yelling help, gotta savior self.” As the song winds down the instrumental coda shapeshifts from proto- Jazz to metallic crunch.

Piano and pedal steel intertwine on “Delta Torches.” In the tradition of Jimmy Webb’s “By The Time I Get To Phoenix,” or Bob Seger’s best mid-70s songs, Austin’s narrative is spare and economical. The lyrics map out an emotional road trip full of detours and epiphanies.

Finally, crackling guitar riffs collide with killer piano fills on the blustery “Birmingham.” An ornery love-(hate) letter to his hometown, it’s equal parts reverential and resentful; “You were my hang-on town, now you never want me around…”

Other interesting tracks include the high lonesome of “Aching Need” and a playful take on James Brown’s “I’ll Go Crazy.” The album closes with the one-two punch of “Risin’ Water Blues” and “This Ain’t No Jukebox.” The former is a blistery Blues-Stomp that details a flood of biblical proportions.

The latter should become a national anthem for Bar Bands everywhere. It offers a musical rejoinder to the inevitable drunken request; “Play some ‘Skynyrd!” Blending scabrous, almost Punk-tastic guitar with a rock-steady beat and pounding piano, the lyrics insist “This ain’t no jukebox, this here’s a real live band.”

Obviously, his abilities won’t be flying under the radar for long, he’s about to head out on the road with ZZ Top. Like Sturgill Simpson, or Willie Nelson, Austin’s sound effortlessly straddles myriad musical genres and crosses boundaries. If Goldenvoice is smart, they’ll book this guy for both Coachella and Stagecoach. Yes, he’s that good.