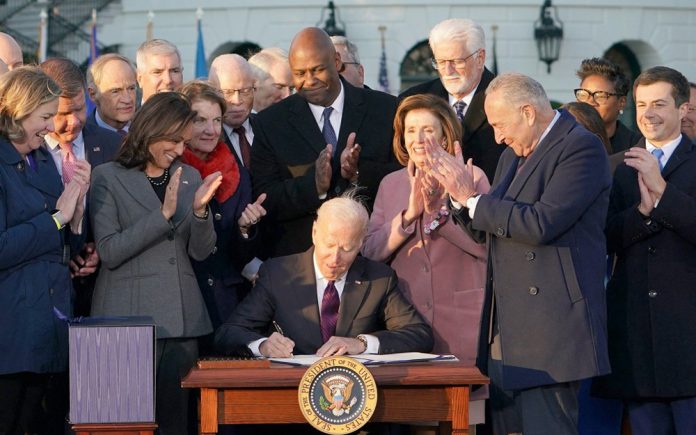 “Believe in Possibilities” – those were the words President Joe Biden shared just before signing the bipartisan $1.2 trillion infrastructure bill into law on November 15th.  Neither far left Democrats nor Trump Republicans supported the bill.

The majority of funds will be spent on rebuilding our woefully inadequate infrastructure of bridges, roads, power, water, sewage, dams, water transport canals, high speed internet and more.  Spending is expected to be spread over five years.  For as large as this number seems, if the money were evenly allocated across each of the fifty states, each state would get about $5 billion annually for five years. For comparison, the new NFL stadium in Los Angeles that the Rams and Chargers call home cost $5 billion while the Raiders new stadium cost $1.8 billion.

According to the American Society of Civil Engineers (ASCE) and the US Army Corps of Engineers, the average age of a dam in this country is 57 years, seven years longer than the expected life.  Water and sewage pipes have five years left with large portions of the system still using old lead piping.  Bridges, on average, have six years left.   $110 billion of the bill will go toward repairing our roads and bridges.  Nearly 20% of our roadways and 45,000 bridges are in poor condition or worse.

Spending will include $55 billion to eliminate lead water pipes while rebuilding unsafe water situations around the United States such as those in different Tribal Nations, nearly 400,000 students and low-income areas like Flint, Michigan.

For as bad as our roads and bridges may be, the energy grid is in far worse shape.  The US energy grid is given a D+ rating by the ASCE as the grid was designed to last for 50 years yet many pieces near an unbelievable 100 years in age.  As many of us have seen here in California, when the aging power grid fails, a host of problems ensue with the worst being fires that kill people and animals.  Recent fires out west have burned the equivalent of the state of New Jersey.

The estimated cost to replace the wires, transformers and poles is between $1.5 and $2 TRILLION.  If we were to replace the power plants, the cost grows by at least $3 TRILLION.  This shows you how the infrastructure bill sounds like an insanely large amount of money.  For comparison, the wars in Iraq and Afghanistan cost the US more than $4 trillion.  The infrastructure bill allocates $65 billion toward this vital need.

If America plans on going green and replacing fossil fuels with clean energy, we need to have a grid capable of handling the increased demand.  If the grid is inadequate for current needs, how can it possibly handle a large increase in demand expected over the next decade?  The power grid failure in Texas last winter was a clear warning of the dangers inherent to inadequate systems and power generation.  As our grid stands now, a hostile country could explode a nuclear bomb 30 miles over the United States and wipe out our entire power grid.  It should be clear that we need a power system capable of withstanding such an attack or solar flare.  The last solar flare large enough to wipe out large swaths of our power grid happened in the mid-1800s.  Like earthquakes, this is a risk we need to mitigate.

The bill includes $65 billion to get high-speed internet to all areas of the United States, including subsidies for the poor; $39 billion to modernize public transit; $66 billion toward trains and $11 billion toward transportation safety with more bike lanes, crosswalks, and sidewalks.  It is hoped that these spending initiatives will lead to the long-anticipated high speed transit line between LA and Palm Springs, completion of CVLink and sidewalks for desert cities lacking them.

While the bill certainly has pork in it, it is the first serious attempt to make America more competitive in decades.  To read the entire bill, type H.R. 3684 into any search engine.