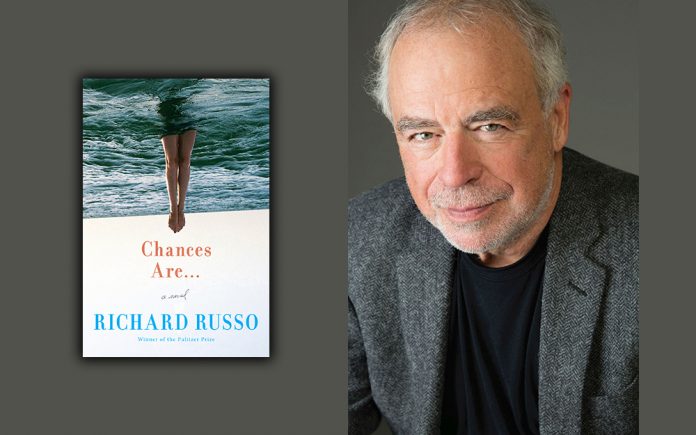 Aristotle figured there were three kinds of friendships: Friendships of utility, pleasure, and “the good.”  Some friendships are easy, while others may be hard.  But a life without friends may not be such a great life.  In Richard Russo’s Chances Are… (Alfred A. Knopf, 309 pages), college chums remember their past and consider what it means to be “good” friends.

The story follows Lincoln, Teddy and Mickey as they come together for a weekend reunion on Martha’s Vineyard after forty years!  They attended a private liberal arts college in Connecticut during the sixties where they became best friends.  Each was on scholarship and they bonded as underdogs and outsiders.

A beautiful well-bread girl named Jacy was part of their inner circle.  The three pals were in love with her.  During college, the ragtag group referred to themselves as the Four Musketeers — All for one, one for all.

After graduation in 1971, and before all going their separate ways, they gathered on Martha’s Vineyard for one last hurrah to party and say goodbye.  Each was unsure about the future.  Mickey had been drafted, Jacy had a fiancé, Teddy had no job prospects, and Lincoln had to head west.  It was the last time they were all together, because Jacy disappeared that very weekend.

Now back on the island, and haunted by Jacy’s disappearance, Lincoln goes to the police to follow up on the investigation only to complicate matters.  The police report is incomplete and inconclusive.  The old cop who was on the case had his own ideas about what happened.  Lincoln and his friends were all suspects.  The woman must have either left the island — since there was no evidence of fowl play – or she never did.   Lincoln becomes suspicious of his friends.  Mickey was the last to see her alive.  Was Jacy buried on the property?

As the old friends convene and reminisce about Jacy, they finally uncover the truth of her mysterious disappearance.

The narrative unfolds through the voices of the four characters.  Mostly Lincoln and Teddy tell the story from their perspectives.  But it is not a Rashomon tale.  The characters are not giving contradictory interpretations; rather their personal stories portray a respect, understanding and love for one another, which makes Jacy’s disappearance even more compelling – and baffling.

There is an unsettling mystery around the missing Jacy.  Having left the island and his friends so long ago, Lincoln struggles with how well he actually knew his pals and if they are indeed even his friends now.   They were young and what did they know about anything back then?

Both Lincoln and Teddy come to terms with the fact that they truly were all close and have never had friendships so dear and understanding since leaving college.  They had each other’s backs then and they have it now.  But sometimes it takes a crisis of faith to know who your friends truly are.

Even with the popularity of “Gone Girl” stories, this narrative feels fresh.  None of the characters hate anyone.  They all love, and loved, one another, which is why the disappearance is so mysterious.  I was caught up in who might have done harm to Jacy and why.  I liked her spirit and appreciated the sincerity of their authentic friendships.

Author Russo does a wonderful job developing the pathologies of all four characters.  Beautiful and tragic, the reader gets insights how friends find one another, and how friendships contribute to good mental health and well-being.

It’s nice to be reminded that true friends accept our weaknesses as well as our strengths.  Real friends lift you up rather than tear you down.  Good friends are rare and should be treasured.