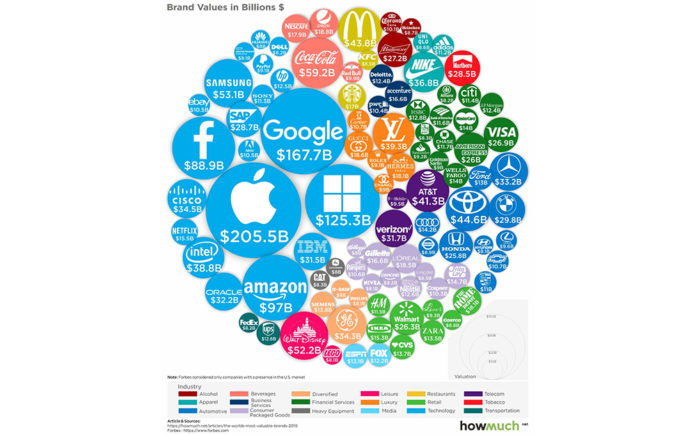 The American Consumer Satisfaction Index is a national economic indicator of consumer opinions of things we buy in the United States.  The ACSI recently released their findings from interviews of 300,000 consumers regarding over 400 companies in 46 industries on a scale from 0 to 100.  ACSI surveys show strong correlations to the stock market performance for each company scored.  It should be no surprise then that the more highly regarded companies have stocks that do better.

Force-ranking forty-six consumer-focused industries, Americans are most happy with Breweries with an 86 score on the 100 point scale.  Personal care and cleaning products (like Crest, Tide or Clorox) ranked second along with television and video players (Sony, Samsung) at 83 followed by automobiles, food and soft drinks at 82.

Which business segments did consumers like the least?  Subscription television services and internet service providers remained in dead last at 62 with no contenders for their less than consumer-focused businesses.

Amazon was ranked first followed closely by Google and Netflix.  Rounding out the top ten were UPS, Home Depot, the US Postal Service, Hershey’s, FedEx, Dollar Tree and Cheerios.

The most coveted consumers by most businesses are those with incomes of more than $75,000/year and a college degree.  This group of Americans likes Amazon, Costco, Home Depot, Netflix and AAA the most. Other notables include Trader Joe’s in 11th, Visa in 14th, National Geographic in 17th and Microsoft in 20th.

When we look at the favorite brands of men, Amazon, Google, Netflix, UPS and the Post Office rank at the top.  Other notables include Samsung in 7th, Microsoft 13th, PayPal 17th and Walmart in 19th.

Woman preferred Google to second place Amazon. Netflix was third followed by Dollar Tree and UPS.  Other notables include Hershey’s in 8th, Cheerios in 13th, Disney in 14th and Clorox in 16th.

Millennials top choices were Netflix, Google, Amazon, YouTube and Target while Baby Boomers were happiest with UPS, Home Depot, the US Postal Service, Lowe’s and FedEx.

These different brand preferences make sense when you consider the life stage that each person is experiencing.

These preferences make sense when you consider the typical resident to each of these areas.  Urban areas are typically younger with more singles while the suburbs have more working families.  As the better jobs are primarily in the urban centers, rural residents typically have less money and therefore frequent and seem to like the lower costing stores.

Thinking about these results, my biggest concern relates to Apple as they did not show up in the top 20 for any consumer groups yet rivals like Samsung, Android, Google, Amazon and Microsoft did.  Other highly valued companies that missed all lists include Facebook, Coca-Cola, McDonald’s, IBM and General Electric.  The biggest positive surprise was the U.S. Postal Service at number six.  While we seem to dislike going to the post office, those feelings do not seem to transfer to a letter and package carriers.

Haddon Libby is the Founder and Managing Partner of Winslow Drake Investment Management and can be reached at Hlibby@WinslowDrake.com.  For more information on their award nominated services, please visit www.WinslowDrake.com.