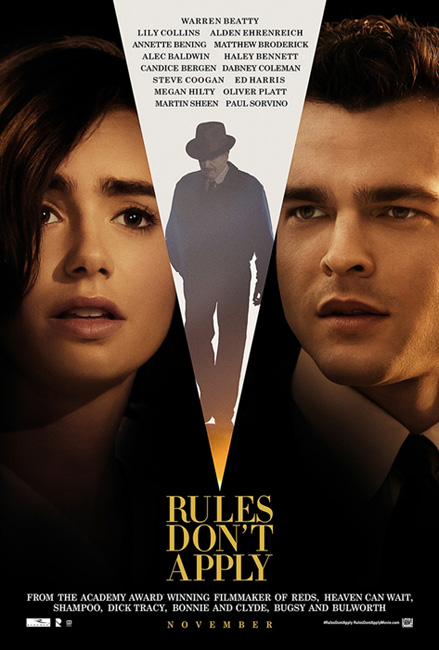 It’s no secret that Warren Beatty has nurtured a long-held passion (or is it a compulsion?) to star and direct in a feature film biography of the notoriously eccentric billionaire industrialist, pilot, filmmaker, control freak and ladies man Howard Hughes. It’s easy to assume Beatty’s attraction to Hughes was a recognition that Hughes was not unlike Beatty in some dominant traits. At Mary Pickford’s special screening of RULES DON’T APPLY, I asked actress Lilly Collins if she though this was so after being directed by Beatty and playing one Hughes’ many contract “actresses” in Beatty’s new film. She though there were similarities in how Beatty saw Hughes and himself.

I was thoroughly entertained by the film, but recognize it is not a great movie nor is it a particularly revealing drama about Hughes, especially in the light of Martin Scorsese’s superior AVIATOR.

Beatty’s movie is essentially a love story about two rather naïve young people, Marla Mabrey (Lily Collins) is a devout Baptist virgin and aspiring actress who comes to Hollywood 1958 and is put under contract with Hughes’ RKO studio.

She’s assigned an ambitious young driver, Frank Forbes (Alden Ehrenreich), who comes from a similar religious background. The two immediately hit it off, but since both are working for Hughes who forbids any fraternizing, their instant attraction not only tests their conservative religious convictions in unexpected ways but further entwines them ever deeper into Hughes’ bizarre world as he pretty much dominates their lives professionally and personally. 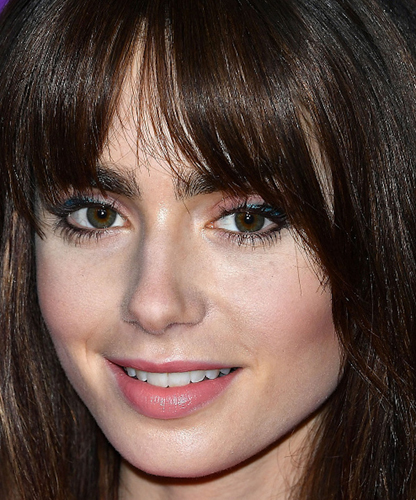 Collins (Phil Collins’ daughter) is a standout as aspiring actress Mabrey and Alden is just right as her ambitious Hughes-designated driver. Without Collins’ convincing innocence and sweetness, the movie would quickly deflate. Beatty plays Hughes as a weird, deteriorating, obsessive compulsive, but still charismatic tyrant. Clearly, he’s the villain of the piece and one can only wish Beatty stuck with this conceit and fleshed it out as a full biopic about a dark, controlling madman’s slow decay. The best part of the movie is the beautifully detailed 1950’s Hollywood and of course Collins. 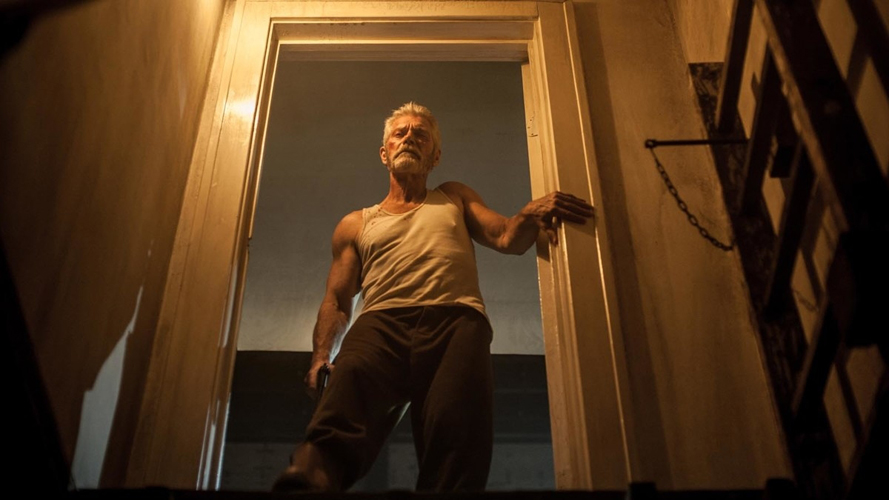 I’m mentioning this terrific little horror thriller again because it is so damn good. Here’s a perfect Christmas gift for that horror fan in your circle.

Directed and co-written by Fede Alvarez. The film stars Jane Levy, Sylan Minette, Daniel Zovatto and Stephen Lang. The story centers around three friends who get trapped in a blind man’s home while breaking into it.

Lang is terrific as the blind, now rich, former vet who lives there. There’s not much blood and no supernatural elements, this original, twisty story is more concerned with creating suspense and shock. And boy does it ever. If you missed this on the big theater screen, treat yourself to some additional shivers, as the nights get colder. Nice behind-the-scenes extras. Sony. Blu-ray 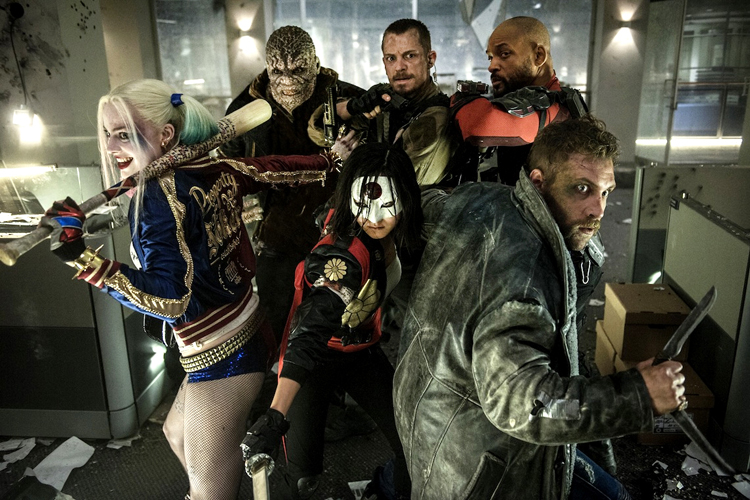 It feels good to be bad… Assemble a team of the world’s most dangerous, incarcaerated Super Villains, provide them with the most powerful arsenal at the government’s disposal, and send them off on a mission o defend a mysterious, insuperable entity. U.S. intelligence officer Amanda Waler has determined only a secretly convened group of disparate, despicable individuals with next to nothing to lose will do. However, once they realize they weren’t picked to succeed but chosen for their patent culpability when they inevitably fail, will the Suicide Squad resolve to die trying, or decide it’s every man for himself?

Now you can enjoy more action and more squad in the Extended Cut with extra footage (13 minutes) not seen in theaters. And everything is even more vivid in eye-popping Ultra HD Blu-ray 3D that must be seen to be believed.

Additionally, for the first time ever, all of the special features can be experienced in an entirely new, dynamic and immersive manner on tablets and mobile phones using VUDU Extras+, the newest feature of the VUDU app, available for both iOS and Android devices. Included with the theatrical cut of the movie when purchased from VUDU, VUDU Extras+ allows users to watch the movie and simultaneously experience synchronized content related to any scene, simply by rotating the device. Sync content is presented on the same screen while the movie is playing, thus enabling users to quickly learn more about any scene such as actor bios, scene locations, fun trivia or image galleries. Also, users can share movie clips with friends on social media and enjoy other immersive content. The VUDU app is now updated and available for download on the Apple app store, and will be updated later this week on Google Play. More than a dozen special features round out this exceptional disc that is even more stunning in 3D. Blu-ray. Warner Bros. Home Entertainment.