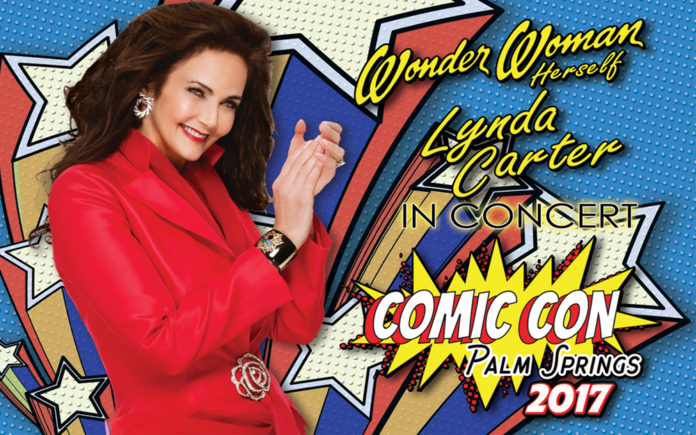 This summer’s upcoming Comic Con Palm Springs, occurring August 25th-27th, will feature a musical performance from iconic Wonder Woman actress Lynda Carter. Carter played the title role in the Wonder Woman television series from 1974 to 1979. Among her many accomplishments, she was also crowned Miss World in 1972 and was awarded a star on the Palm Springs Walk of Fame in 2014. She currently has a recurring role in the television show Supergirl.

Lynda Carter brings her “The Other Side of Trouble” tour to Palm Springs, happening on Saturday at 8 p.m. in the Convention Center, after the convention hall closes, and will include songs from her studio albums. Her music is described as a mix of country, jazz and pop. Mrs. Carter also contributed five original songs to the soundtrack of the popular video game Fallout 4, in addition to voicing one of the characters.

Comic Con Palm Springs founder Christopher Spellman emphasizes what an accomplishment it is for Mrs. Carter to have chosen to appear at the convention, saying, “We’re very excited about this, this is… a very rare thing to have.” Spellman explains Carter’s role in Comic Con Palm Springs and that she has never before appeared at a comic con, saying, “She’s not signing autographs on the floor during the day, however, there will be an autograph session with her after the concert for 40 lucky people who buy her “Ultimate Backstage VIP” experience.  This is a stand-alone concert for everyone that is a fan of Lynda Carter.” Spellman cites his interest in her singing career rather than just her role as Wonder Woman as one of the reasons that she chose to appear at his Comic Con, saying, “Singing is a big part of her career now… it’s a passion for her, so for us to approach her that way and to do something that she wants to do helped out tremendously.”

Comic Con Palm Springs is growing quickly, despite competition even within the valley and Lynda Carter’s performance sets them apart, with Spellman saying, “It’s never been done before… she’s an icon to the pop culture world.”

Comic Con Palm Springs has once again partnered with Escape Room Palm Springs to include a Zombie Maze Room, in which attendees have to solve puzzles and evade zombies on a mission to cure zombism. According to Spellman, the event was so popular last year that there was an hour wait to participate, at times. “There’s going to be zombies and other people in a room that kind of guide you through a little maze… you have to solve puzzles to ultimately find a cure for zombies,” he says.

“It’s about making it a real three-day festival,” Spellman says of the diverse array of events and speakers. The website has recently added a section of professional cosplayers that will be in attendance. “It’s all pop culture,” he says, “This is… for fans to meet a lot of their pop culture heroes.”

There is also a Friday night dinner with Stan Lee that can be purchased for $250. The dinner includes 3 day VIP admission, collectible items, a photo-op with Stan Lee and a signed photo.

Ticket options for Lynda Carter’s concert are $35 for general seating with an included badge and lanyard, $55 for second tier seating and the included badge and lanyard and $85 for premium seating and VIP entry. There are also options that include 3 day VIP tickets to the comic con. VIP Warrior Princess Tickets are $400 and also include reserved seats in the front two rows, a one night hotel stay, a pre-signed autograph photo and collectible items. Ultimate backstage VIP tickets are $1200 and include front row VIP table seating, a one night hotel stay, champagne and beverages, a backstage pass, an autograph on one item of your choice, a photo with Carter and collectible items. A seating chart can be viewed and tickets can be purchased on ComicConPalmSprings.com.