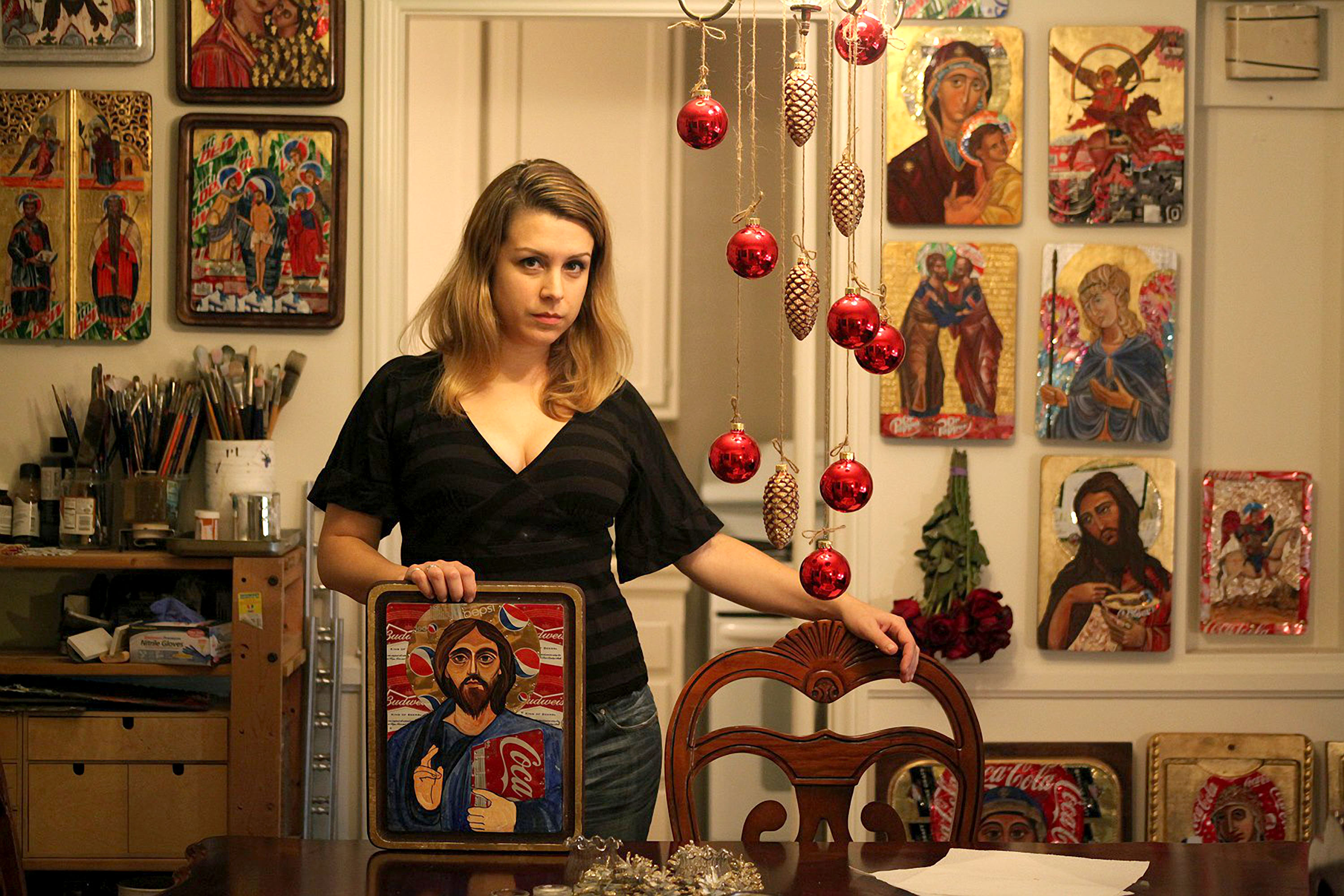 Somewhere in Milwaukee, a young girl, with no artistic influences to speak of, made a conscious decision to become an artist. How does a girl, surrounded by everything BUT art do just that? How does she become a devoted, emerging artist? With study, being ever present in a learning environment, sheer determination and an undaunted stubbornness to maintain artistic integrity – at least, that is how Kim Zsebe is doing it.
Becoming an artist was all Kim ever thought of being. She attained a BFA in painting and drawing, with a minor in art history as well as a BA in philosophy from the University of Wisconsin – Milwaukee. Upon graduation, Kim says, “I got out of school and suddenly realized, I had no idea how to become an artist.” So, Kim got involved in the Milwaukee artist community. She lived in a building that had been renovated as a loft for artists. “Being a painter can be a very isolating experience,” she shared. “I was really fortunate to be in this community. I started learning a lot from them – how their working processes were, how they showed their work.” The loft eased that sense of isolation and pushed her to another level as she was able to think and talk about her work.
She moved to California, joining her brother who attended UCLA six years ago. While loving the idea of living somewhere warm and sunny, Kim was still, basically, starting over. “I showed my work wherever I could and wherever I could. It’s has just been over the last year that my work is starting to be recognized.” Her work was most recently featured in February 2012 at the Hive Gallery in Los Angeles. It has also been shown at Barnsdale Park, La Luz de Jesus, and The Loft at Liz’s, all of which have displayed her most recent work in religious icons. This icon work combines her love of philosophical questioning and her dedication to traditional methods of painting. It has been described as “Fun and provocative, familiar yet fresh; paintings that lead the viewer into a dialogue that compares the sanctity of religion to our modern day consumerism.” 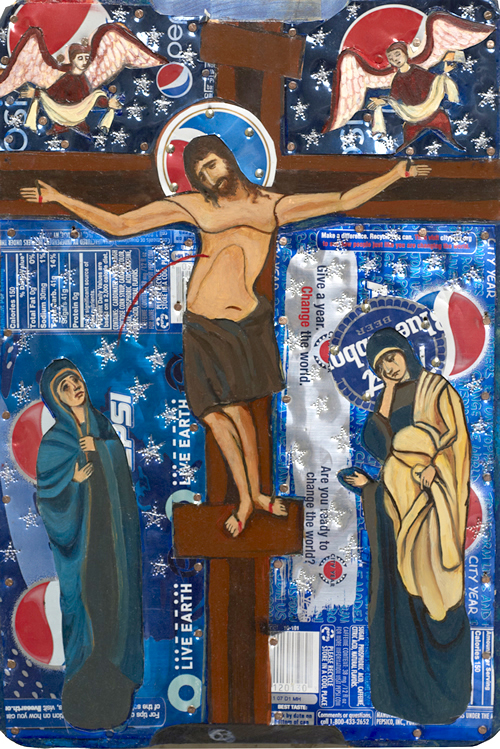 Upon first look at Kim’s art, I personally felt a sense of awkwardness. I saw a beautifully painted picture of an iconic saint with Corona beer logos in the background. It created an immediate sense of conflict for me. Clear on the emotion the artist was possibly hoping to illicit, I searched to understand what was being communicated. Kim’s art comes from a love for the history of it, most especially how the church itself, fueled and funded many artists throughout the centuries and the idea that at one time, there was a debate as to whether icons would even be allowed in the church.
“I’m not a religious person. I was brought up Lutheran but would consider myself atheist at this point. While I’m not religious I do find extreme beauty in religion, even though there’s definitely an ugly side to it as well. For me it has less to do with religion per say. Painting is an individual language, and I want people to understand the language that I’m speaking.” The icons work as a “Rosetta Stone” into understanding what Kim is trying to say through her art. “My paintings have more of a universal understanding. People already have an idea of what icon is and what they’re about, and icons have a unique history in themselves.” The discussion becomes about the similarities and differences of the icons, religious or commercial. People are very opinionated about both. She explains by using the example that while both you and someone else want to love your neighbors, you may insist that you have to do it this way. You want soda, but someone will say it has to be Pepsi. “It’s all about branding. This world is becoming this tiny little place, and we need to start talking about this.” Kim even taps into the current debate of weather water should be privately or publically owned ( and yes, as scary as it is, there is a debate). “These corporations have a lot of influence and money, much like the church in early history. I think people need to be aware of it.” Kim’s point is that there is always opportunity for the wrong people being in position to wield their power and influence over such matters.
Kim loves the position she’s in today. She doesn’t have anyone telling her what to do with her art or telling her how many of them to make. She’s not producing work simply for sales. She had heard horror stories of artists doing really well, and then having to reproduce the same thing over and over again. “I can follow my own vision and change things up if I want. I love the idea of my work being my own form of income, but I don’t like the idea of it being a commodity. And that is basically what my work is about, the conflict of culture and commodities.” Kim proudly shared how she maintains this integrity. “I come from a blue collar town. I’m a Milwaukeean at heart. So I work part time at a photography store (I also do photography which seems to pay more money than art). I work four days a week at a job that allows me to have as much time off as possible, so I don’t have to worry about paying my rent every week.” This has always been the famous struggle of the proverbial starving artists. Kim observes, “You can definitely see trends in art. You’ll see someone get success with one thing, and then see several other artists coming out with similar work. Me personally, I’d rather just do something else.”
Kim’s paintings, much like their artist, are truly beautiful, intriguing and never ending in their inspiration for active, intelligent discussion. You can learn more about Kim and her artwork at http://zsebe.com/index.html. Make sure you purchase tickets to see the artist and her art at the AMFM Festival June 13-16th in Cathedral City. Tickets may be purchased at http://zsebe.com/index.html 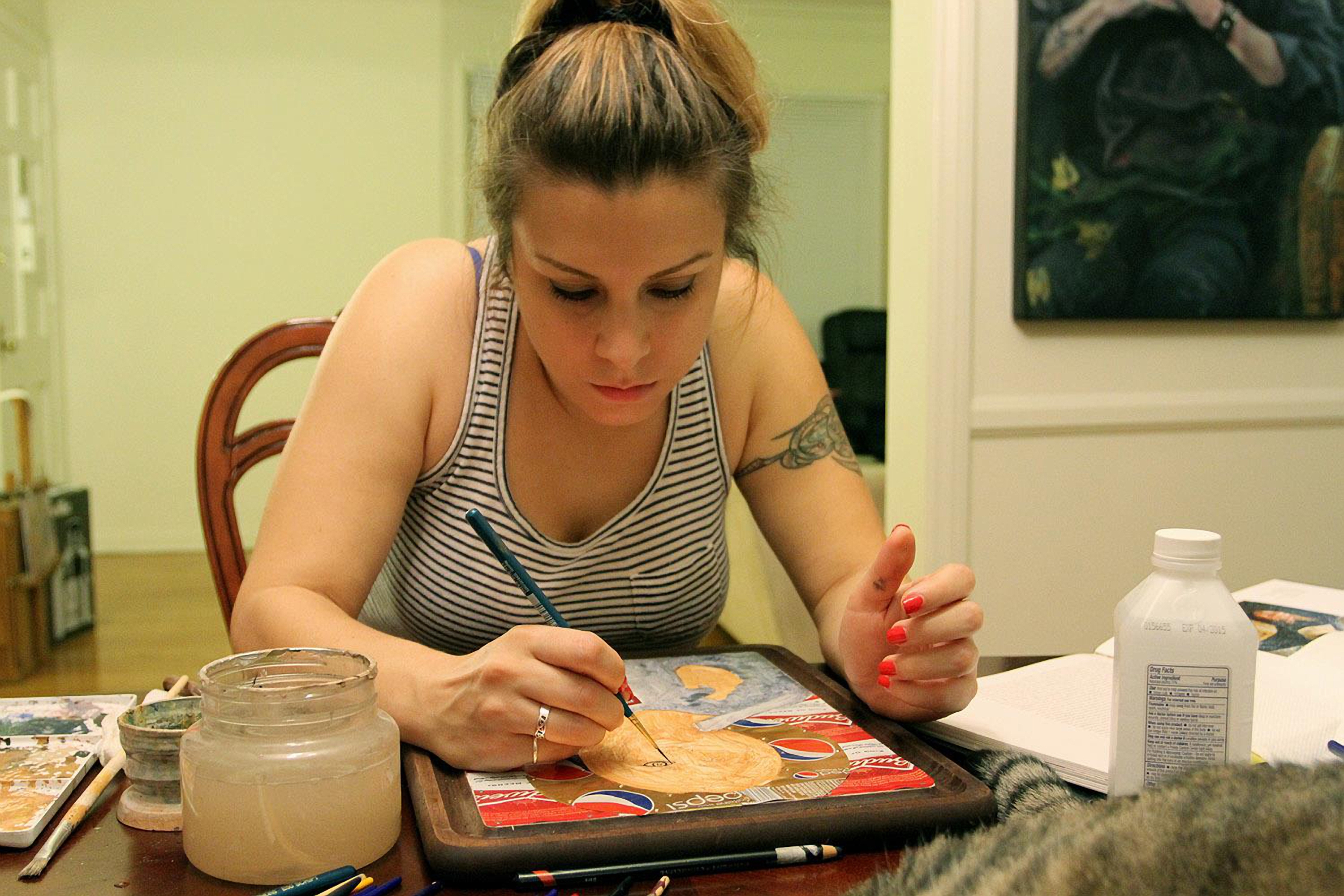