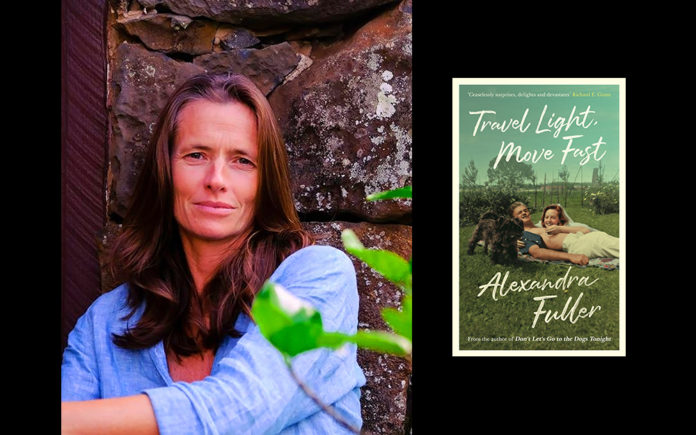 One’s childhood is a fraction of a lifespan.  Yet, it has the most significant impact on one’s entire life.  And, for better of worse, children are shaped by their parents.  In Alexandra Fuller’s Travel Light, Move Fast (Penguin Press, 225 pages), the author draws strength from her father’s eccentric life and philosophy.

The memoir begins with the author at her father’s hospital bed.  She traveled from her home in Wyoming, to Budapest, Hungry, to be by his side.  Her parents were taking the healing waters, when he collapsed.  Now, tethered to the bed by IVs and monitors, and just out of a coma, he recognizes his daughter, and his dire situation.   Even on his deathbed, he is able to make light of the inevitable and share his wisdom about life with his eldest daughter.

As Fuller cares for her mother, who waits in a nearby hotel, and spends time with her father, she recounts the beats of their personal lives and how they lived as a family in south and central Africa.

Fuller’s father, Timothy Fuller, considered himself the family’s black sheep and left England for Africa where he met and married his wife, Nicola, — the author’s mother.  Fuller’s marriage lasted over fifty years.  They led a nomadic, adventurous lifestyle.  They eventually settled on a banana farm in Zambia’s Zambezi Valley.  They were white colonialists with British roots.

This is a tale not only of a remarkable man, but a marriage.  Although, Fuller’s father is the dominant character in this memoir, her mother is equally fascinating.  It is difficult to sum up Fuller’s parents:  Free spirits, throw caution to the wind, live fully, no regrets.  Their lives as described by Fuller is of a couple who respected the land, were equally yoked, as well as equals in the relationship, loved animals, lived fearlessly and were resilient.

I kept looking back at the wonderful photo on the book’s cover.  The picture captures Fuller’s folks in their youth ready to take on whatever life might throw their way.  Innocent and excited about their future — the picture was taken before the Rhodesian war and the death of their three small children.  The author is the eldest child with one surviving sibling.

Fuller’s parents went to private boarding schools.  Her mother loved reading history and British literature.  Her books in Africa were sprayed with a blue poison to keep the bugs from eating the pages.  Her parents are like British characters in books, noble blood, adrift and abandoned by their homeland, fighting in foreign lands.  Fuller’s eccentric parents shaped her and her sister.  They learned amazing life lessons as they constantly moved across Africa following a man who refused to be bored.

But, there is more to this memoir than Fuller’s parents, and her life growing up in Africa.  When she returns to the US and faces her grief, she also suffers the tragic loss of her 21-year-old son.

The memoir pivots as the author goes from a child losing a beloved parent, to one who grieves losing a child.  In less than three years, Fuller experienced emotional extremes of love and loss.  It is heartbreaking and painful as she regains her voice by writing.  It is in the depths of her suffering, we see how she was indeed shaped by her parents and young life surviving extremes in Africa.

As always, Fuller writes beautifully.  This memoir is like a magical trip to Africa.  The love story of her unconventional parents is exceptional.  Her life growing up in Africa is incredible.  Her lessons of love and loss universal.