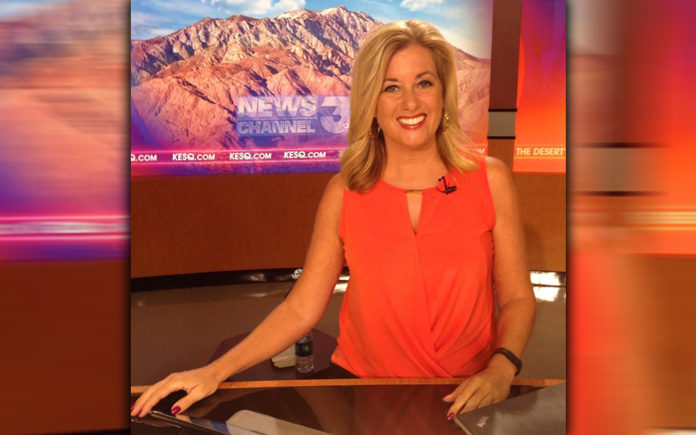 Having graced the screen for 27 years in the Coachella Valley, broadcast journalist Karen Devine has established herself as not only a local television personality but also a trustworthy source for desert breaking news. Despite her professional success, Devine maintains an air of humility with her trademark smile as she takes her spot at the anchor desk.

Devine was raised in Northern California in the city of Saratoga, approximately 50 miles south of San Francisco. She attended West Valley Community College where she took part in track and cross country for a coach she had been training with since she was ten years-old. Devine then moved to Southern California to attend Cal State Fullerton. 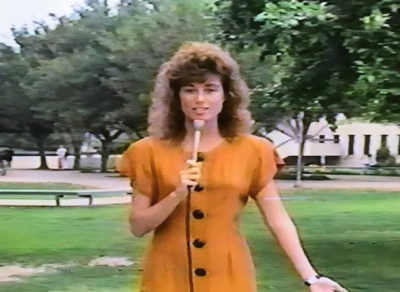 “When I got to Cal State Fullerton, I met with an advisor who said they were starting a broadcast journalism program and he thought I would excel in those classes. I said, ‘O.K.!’ and that was the start of what turned out to be an amazing career,” said Devine.

Devine’s decision to pursue journalism was influenced by a passion for writing. She had written for her high school newspaper and was interested in adding the element of interviewing people and getting information out to the public in the form of television news.

After being hired as a reporter, Devine moved to the Coachella Valley in 1992 for her first network affiliate job with KMIR, the NBC station in Palm Desert. It took only three weeks in the position before she was promoted to 11 p.m. Anchor.  Devine worked at that station for 17 years and was eventually hired by the competition, KESQ, in 2009. She has remained there since, anchoring and reporting for the past ten years at the Desert’s News Leader.

“As an Investigative Reporter for KESQ’s I-team, I love taking on an issue and helping to solve a problem. It’s very satisfying. It helps that I love working with John White and Haley Clawson. We actually like each other,” shared Devine.

Some highlights of Devine’s career so far have included winning Emmys, Edward R. Murrow and Golden Mic awards for her reporting and newscasts. She references notable honors like her Emmy win in 2009 for “Teens and Prescription Drug Abuse: The Epidemic,” a piece she worked on with then Congresswoman Mary Bono, who told her personal story about her son becoming addicted to opioids. 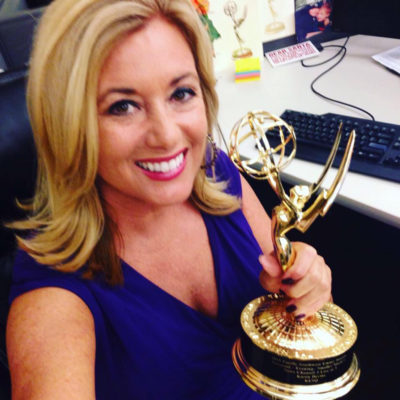 Devine received Regional Edward R. Murrow Awards for her two-part series, “It Happens to Boys,” where she spoke with a convicted sex offender about how he lured boys and followed a local law enforcement team who tracked local sex offenders, and “Right to Die”—telling the story of a local man who was arrested for murder after being unable to put back his terminally ill wife’s oxygen when she pulled it out.

“The hardware is nice, but more importantly, it’s the feedback from the community that keeps me going. It has been a very rewarding profession for me in that regard,” stated Devine.

Devine recently received a large response from the community for her two-part series, “Questionable Care,” about skilled nursing facilities in the Valley and the kind of care they provide.

“I received no less than 20 phone calls and emails daily from people who needed to talk about their experience for at least three months after the first story aired. I was able to find information from the State and the County on how to help some of these people for free, and I am working to continue the conversation with our local government officials to hopefully make some changes,” explained Devine.

Devine credits the younger members of the KESQ staff who are tasked with doing multiple jobs involving editing, reporting and social media skills for inspiring her to continue learning in her field. She also finds inspiration in her family.

“My eldest son, Zach Boetto, is a working reporter in Columbia, Missouri for KMIZ. We can talk shop now. We speak the same language and I have to say, he has taught me a lot and helped me understand and embrace the direction television stations are going to connect with viewers,” said Devine.

During her downtime, Devine enjoys traveling to watch her youngest son, Tony, play collegiate baseball for Santa Clara University as a catcher going into his junior year. In the off-season, she spends time with her boyfriend traveling to different concerts, and has nights out with friends and family.

Ultimately, Devine wishes to continue building her legacy as one of the leading faces of the KESQ news station. In the future, she sees herself enjoying a view, drinking a glass of wine, listening to great music, reflecting back on a great career and perhaps teaching others what it takes to have staying power in a career like broadcast journalism.

“I am just like everybody else. I love my family and friends. I’ve had my ups and downs in my personal and professional life… I’m approachable and I am not judging you. I just want to know your story,” stated Devine.