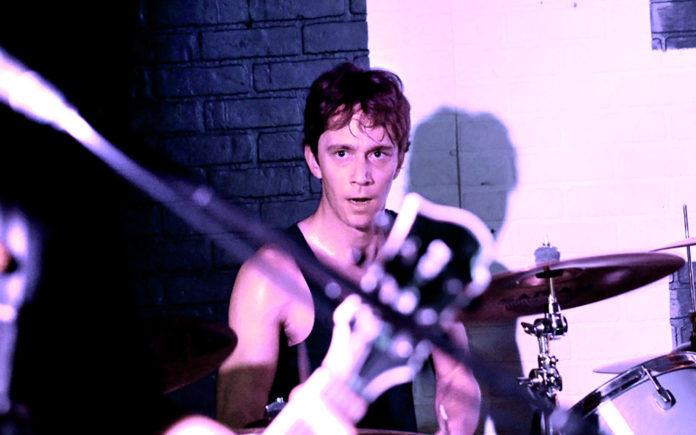 Troy Whitford is one of the most in demand drummers in the Coachella Valley. He currently is a member of alternative rock band 5th Town and punk/metal band Throw the Goat and was formerly in punk band The Sweat Act. All it takes is watching Whitford perform live one time with any of these bands to see why he was nominated for Best Drummer for a CV Music Award. Both of Whitford’s bands are also nominated in a slew of categories including Best Band (5th Town) and Best Punk Band (Throw the Goat). This past April, 5th Town won the CV Weekly Music Showcase landing them $1500.00 cash, a photo shoot, studio time with Ronnie King and a video shoot with Chip Miller, which they will be working on this summer. Throw the Goat recently returned from a tour of the US and the UK. You can catch 5th Town performing at the CV Music Awards this Sunday, July 23. Whitford took time out of his busy schedule to answer a few questions for us.

CVW: Where were you born and raised?

Troy Whitford: “I was born in Glendale, CA and came to Palm Desert when I was about 12 years old. Once high school came around, I ended up in the high desert of Hesperia, CA. After high school, I got a hair up my ass and moved to New Mexico for 6 years, best experience of my life. I moved back to Palm Desert about 5 years ago.”

CVW: How old were you when you ﬁrst started playing the drums? 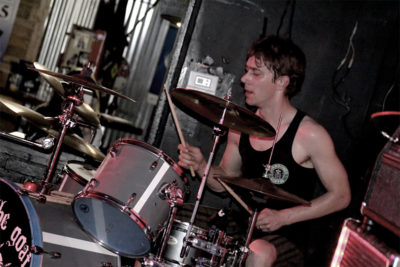 TW: “I’ve been messing around with drums and percussion ever since I could remember. I was actually that kid playing pots, pans, and bowls with tooth brushes, no kidding. However, I got my ﬁrst drum set from my pops when I was 16. It was a burgundy Sunlite.”

CVW: Do you play other instruments?

TW: “Nope. The Drums have always been my main squeeze. I like to play around with other instruments (In the privacy of my home) mostly for inspiration. I’ve never had any real formal training so I mostly play by guess and check. When I lived in New Mexico, I was all about Bob Dylan, so naturally I started writing songs on the guitar and Harmonica for a short period. Good times.”

CVW: What was the first band you played in?

TW: “Hours after getting my ﬁrst drum set I started a band with an old friend (guitar player) in his mom’s garage in Palm Desert CC. We were called ‘The Anthropoids’ and we never played a show. We were a punk band with a female vocalist and bass player, I can’t remember how any of the songs went.”

TW: “They are 6 years strong. It’ll be a year in October for me and what a year it has been.”

CVW: How did it come about? 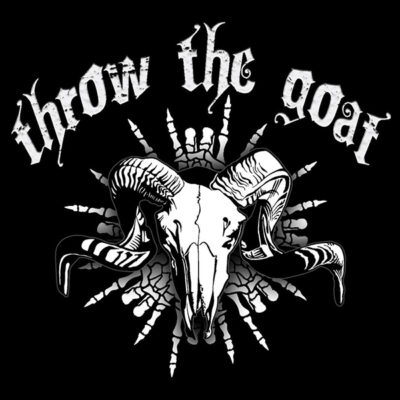 TW: “I met Throw The Goat at The 8th Annual Autism Beneﬁt at Schmidy’s Tavern, but I just missed their performance. My wife/agent Caleb… I guess lost her mind after they played, so when I showed up she couldn’t introduce us to each other quick enough. So we started setting shows up together in the desert while I was playing with The Sweat Act, every show was better than the next, I became a huge fan. About two years later at The Hood, I ran into Puke (Guitar/Vox) and Mike (Bass/Vox) just after their last tour. Puke cornered Caleb and I and began his proposition, I knew after his ﬁrst sentence what he was getting at, however, I put my poker face on and listened to his 15 minute set up before he asked if I wanted to join Throw The Goat (while Caleb and I looking back and forth at each other like, is this really happening). I asked, ‘Does the Pope wear a funny hat?’”

CVW: How long have you been in 5th Town? How did that come about? 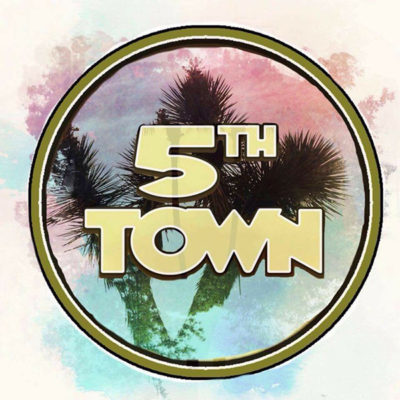 TW: “I’ve been in 5th Town for almost 2 years now. One day Marcus (Johnny Sugarbritches) came up to me and said that Chelsea’s new band was looking for a full time drummer. At the time, Mr. Josh Fimbres from Thr3 Strykes was drumming for them, but he was really busy with Thr3 Strykes. So I thought I’d complicate my life a bit more by joining another band. I messaged Chelsea and asked if I could try out for 5th Town, and she replied…’Does the Pope wear a funny hat?’”

CVW: You just recently went on tour with Throw the Goat. How many cities did you go to and where?

CVW: Of all the cities you went to which one was your favorite to visit? Favorite to perform in?

TW: “Edinburgh Scotland hands down, we got to spend about 4 days there. So we kicked around the pubs, the castles and just roamed the streets. We stayed in an awesome hostile next to an old cemetery and experienced some spooky stuff. Akron, Ohio was my favorite show from the tour, and I think I can speak for the rest of the guys on this matter. It was a basement show at this queen bee punk rock chick’s house; they gave us the royal treatment. The scene is out of this world in Akron, I can’t wait to go back.”

CVW: Was this your ﬁrst time being in Europe? What were your feelings about the different cultures?

TW: “It was. I love the culture out in the UK, it all just makes more sense to me. The terminology is simpler, the public transportation rules, and their drinking culture is strong. The people were kind and were never hesitant to help us Yankees. The history out there is mind blowing, it really gives you a sense of how young the states are in comparison.”

CVW: With all the bombings and terrorism going on, were you concerned about traveling out of the US?

TW: “A little, we ﬁgured that it wouldn’t affect us. Mike and Puke didn’t have any trouble getting in, BUT me, I got the third degree. I can go on about the stupid questions they were asking me, but the truth is that after the plane ride I was half drunk, half asleep and 8 hours without a smoke. It might have seemed worse and longer in my mind, but the memory of crossing into the UK now was nothing short of a nightmare.”

CVW: What is the hardest part of touring? And what is the best part”

TW: “Finding a ﬂoor to sleep on, but we were very fortunate this trip in that department. Most of the bands came through for us by ﬁnding places for us to crash; we slept in some strange places. BEST part was playing the shows and seeing the sights! But, mostly the shows were the high lights. It just seemed to get better and better.”

CVW: How did the band ﬁnance the tour?

TW: “Band fund from merchandise, shows, ticket sales etc. Everything we do is completely DIY, so whatever is made by the band goes right back into the band.”

CVW: Did you just recently get an endorsement for drum sticks?

TW: “Hell yeah, XCEL Drumsticks. Puke hooked me up with the endorsement, like they say, it’s not what you know but who. I’ve broken two pairs since April, longest lasting sticks I’ve ever played with!” (selﬂess plug)

CVW: You currently play drums in Throw the Goat and 5th Town and formerly did with Sweat Act. What is it like performing in 3 bands that are so much different? 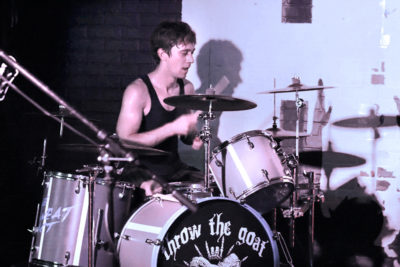 TW: “It’s like listening to a playlist on your computer, one genre comes on and you react one way, then another genre comes on and you react another. Does that make sense? It did in my head. I just love so many different types of music that it just seems natural to go from one to the other. The biggest help is that I love all my bandmates like family, and we treat each other as equals. I’m pretty sure that I’m the youngest member in each band, so I’m grateful that they took me in as their own and have shared their musical talents with me; I’ve learned so much from them.”

CVW: Does it help you to keep from getting bored?

CVW: Who are your drumming inﬂuences?

TW: “Bill Stevenson (Descendents) and David Garibaldi (Tower of Power) mostly; besides that, anything funky, punky, and original inﬂuences me.”

CVW: Who are your all-time 3 favorite bands?

TW: “Probably Every Time I Die, a metal core band from Buffalo, NY.”

CVW: What band do you listen to that people would be the most surprised to hear?

TW: “From experience, it’s gonna be Tower of Power, some people look at me sideways when I tell them that TOP is one of my favorite bands. You gotta have soul, with a capital S.”

CVW: What local band do you most respect and why?

TW: “I’d have to say The Hellions. Not only are they some of the coolest guys I’ve meet, and are one of the raddest bands in the desert, but they are the most persistent band around. They’ve been kicking ass for so long, putting out records, and playing shows for years. It’s kinda hard not to respect that as a musician.”

CVW: What shows do you have coming up with Throw the Goat? And 5th Town?

TW: “This summer 5th Town is getting ready for the studio, and shooting a music video, so we’ll be keeping shows to a minimum to focus on that. Our next show is at The CVMA’s July 23rd, Willie Boy’s Aug 19th and The Hard Rock Sept 29th. Throw The Goat just played The Void in San Bernardino on July 14th, and now we’ll be focusing on our new LP.

TW: “Being part of this music community here in the desert has been an honor and life changing experience. I’d like to thank all the fans and music lovers who make what we all do a reality; and You and Phil for your unbiased support, and hard work for all of us here in the desert. I’ve always said that music is a marathon, not a sprint. Long hours of behind the scenes work, networking, perseverance and practice, practice, practice. Stay humble, keep positive and be kind.”