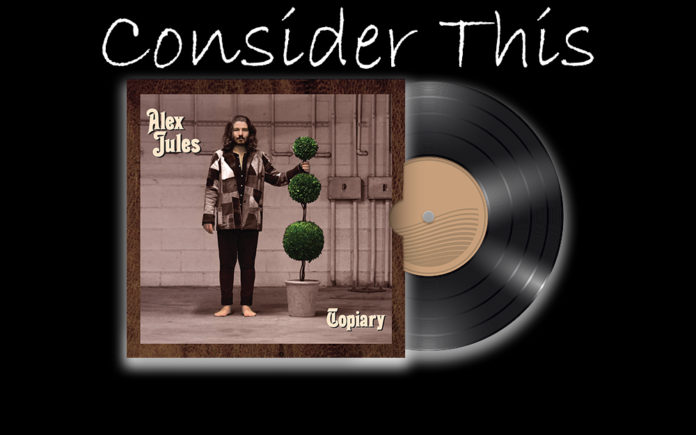 If your musical gods include Paul McCartney, Emitt Rhodes, Harry Nilsson and Elton John, do yourself a favor and pick up Topiary, Alex Jules’ full-length debut. Born and raised in New York, the singer-songwriter is currently based in Los Angeles and has been playing music since he was a tot.

Alex began playing piano about the same time as he started kindergarten. Ironically, his original inspiration wasn’t Rock N’ Roll, although it slowly filtered in. His obsession, up through high school, was Classical composer, conductor and pianist Leonard Bernstein. A wunderkind and innovator, he is probably best known as the composer of Broadway milestones like “West Side Story,” “On The Town” and “Candide,” but he is also credited with introducing Classical music to the masses via television programs like “Omnibus” and “Young People’s Concerts.” He championed Shostakovich and the Beach Boys’ Brian Wilson with equal enthusiasm.

During Alex’s teens, it wasn’t uncommon to hear John Phillip Sousa marches followed by Electric Light Orchestra blasting out of his bedroom. Spending most of his time performing in concert bands and symphony orchestras, he sorta skipped that musician rite of passage that involved Garage bands and touring in grotty vans. It wasn’t until his summer break from NYU that he joined a band that practiced in the basement by day and played local clubs at night. But the experience was short-lived as he had to return to school.

Once he settled in New York City, Alex connected with like-minded musicians and they became The Greys. He had enough written original material to make an album, and they recorded together, but result didn’t feel like a full-fledged band effort, nor was it a proper solo record. Paying the bills in the city that never sleeps meant gigs in cover bands, as well as performing in cocktail lounges and hotels. He was making music, but no one was really hearing it.

By 2014, he felt like his career had reached an impasse, so, he decided to relocate to Los Angeles. His girlfriend was an L.A. native, and initially the plan was to just stay for the summer if he didn’t gain a foothold in the music industry. Once he reached the West Coast, he was put in touch with singer-songwriter/multi-instrumentalist/producer Fernando Perdomo. Things began to fall into place.

Something of a musical Mad Hatter, the Florida transplant has been making music for years. He had recently shared production chores with Chris Price, working with reclusive geniuses like Linda Perhecs and Emmit Rhodes. At his Reseda Ranch recording facility he’s championed hiding-in-plain-sight prodigies like Cait Brennan and Ken Sharp.

Alex sent Fernando some songs through the interwebs and received positive feedback. Fernando suggested he attend two shows happening the same evening. They didn’t meet at the first one, but managed to connect at the second one held at El Cid. (The historic venue on Sunset Blvd. has been exuding old world Hollywood magic for five decades). The serendipity continued, because that evening Alex also met Chris Price.

Like his Sunshine State compadre, Fernando, Chris is first and foremost a musician, having written and recorded three nearly perfect solo albums. After more than a decade in Los Angeles, he has also made a name for himself as a savvy and simpatico producer. Becoming a linchpin for diffident artists like Linda and Emitt, as well as the go-to guy for critically acclaimed talents like Jeffrey Gaines, ex-Jellyfish founder, Roger Joseph Manning, Jr. and Val McCallum. A few months after meeting, they ended up on the same bill at a club. The following day they got together and played songs for each other, the rest, as they say, is musical history.

The connection felt instantaneous, and along with multi-instrumentalist Emeen Zarookian and drummer Ben Lefcourt, Chris and Alex formed BEBOPALULA, something of an ad hoc Supergroup. Luckily, Alex also began heading out on the road as a touring musician, alternating between Denny Laine, formerly of Wings and the Moody Blues, Joey Molland, last surviving member of Badfinger and Mike Nesmith, who first gained fame in the Monkees. In between tours, he and Chris began shaping and recording his songs, the result is his first official long-player, Topiary.

The record opens with the one-two punch of “Can’t Get Through” and “Nine Days.” “Can’t…” crackles to life with earthy piano chords, fluid guitar riffs, slingshot bass lines and tumbling bongos. Despite the jaunty melody and instrumentation, the opening couplet sets the tone of a relationship on the rocks; “I can’t get through, though I’ll try harder, what’s left to do, what’s left to barter/Even if I do, you might say you’re going on your own way.” A rippling piano on the break is supplanted by stinging guitar that paves the way for this revelation, “maybe we’ve moved on…(but) it won’t be hard for me to carry on.” The song’s outro features a nimble piano run that feels influenced by Nina Simone and Elton John in equal measure.

The initial arrangement of “Nine Days” weds stabby keys to a propulsive kick, before downshifting into a Beatlesque groove. Sun-kissed harmonies lattice over snarly guitars, as tart lyrics chart the historic course of Lady Jane’s brief ascension to the Throne in 1553. Alex’s reedy tenor conveys empathy one minute and apathy the next as he notes; “With great power, comes great tragedy, the crown you’re wearing, stripped so mercilessly.” (That may resonate for a certain Tangerine Man at 1600 Pennsylvania Avenue who golfs more frequently than he governs).

The buoyant melodies on both “Trailer” and “LA” belie downcast lyrics that pivot between angst and ennui. The former is breezy, blending sparkling piano, sugar-rush guitars and a tick-tock rhythm. Alex immediately takes the listener into his confidence, confessing to a one-night-stand that might turn into something more. But rather quickly, his insecurities are on display; “I’ve got a guitar with five strings that I carry on my shoulder, and a lot of my songs I can’t sing/Not been easy getting older, all my shots at fame are long gone, my heart’s gotten colder.”

Sputtery percussion, stately piano, tensile bass lines and whiplash guitars give the latter an anthemic vibe that lands somewhere between Elvis Costello’s “New Lace Sleeves” and Survivor’s “Eye Of The Tiger,” (san the synth-y brass fanfare). Despite the jittery tone, equivocation and malaise seem to be the lyrics’ weapons of choice as Alex admits, “Getting up looks like it won’t work out for me today.”

The best tracks here are simply iridescent. “Distraction” is powered by sun-dappled guitar, cascading piano notes, wily bass lines and a ricochet rhythm. There’s an easy-going, AM radio charm to the tune, as lyrics detail a casual romance that becomes more…for only one of the participants; “So I was just a distraction, from other places you could have run, and when you’re finished playing me you’re gonna go again and play someone.” Luckily the bitter disappointment is leavened by the effervescent melody and lush vocals.

If Burt Bacharach and the Beach Boys had ever collaborated, it might sound something like “Beside You.” A fluttery string section shimmers alongside swirling Wurlitzer, Rhodes and elegant piano. Lyrics pitch woo with economy and grace; “I would try to be someone new, I would fly right next to you, but the way things seem to go, makes me feel the ebb and flowing, ‘til I wind up next to you.”

There’s an Old World elegance to “I Can’t Take More Rain” that recalls the ‘60s Folk Rock chestnut, “Those Were The Days” by Mary Hopkins. A see-saw rhythm is accented by a swooping string section, spidery mandolin, wheezy harmonica, and lurching piano, all bookended by a handclap/bongo beat. Richly detailed lyrics sketch the saga of a loner that hides at home honing his assassin skills via video games before taking a desperate step toward infamy; “Now the day has dawned, I’m afraid that I Know what to do, hide behind the trees, then I count to three but shoot on two/No don’t help me, it’s my big debut, I never was free, and every chance I blew.” Sadly, this scenario has become an everyday occurrence that is currently the norm.

Finally, “Another Way” is the album’s magnum opus. The irresistible melody is propelled by bristling guitars, subtle organ colors, supple harmonies and thumping piano notes that crest over rubbery bass lines and an insistent rhythm. Lyrics depict a hapless boyfriend furiously trying to make amends with his lady, admitting “Every time it winds up here I write you a song.” On the break the song revs into the stratosphere, adding a supersonic guitars, then doubling back to include honeyed harmonies and a finger-poppin’ thump.

The action slows on three tracks. “Hey, You’re Only Playing” walks the listener through a period of mourning, allowing, “Sure, this all hits us, and we stumble and we fall.” The arrangement shapeshifts from Baroque to Broadway bound. “Our  Crazy Love” is a piano ballad that serves as a wistful encomium and encourages us to stop and smell the roses; “Our lives could go flashing past us, in some unlikely long haze…so let’s stop for a moment to look at what we’ve got.” Meanwhile, “Fall,” anchored by lowing strings and descending piano notes feels appropriately autumnal. The album ends on an elegiac note with the bare-bones grandeur of “Tis Of Thee I Sing.”

Topiary is one of those albums that evokes an earlier era without ever feeling dated. The good news is Alex Jules has created a timeless record. The better news is it seems like he’s just getting started.