If you love a good party, and have been in the Coachella Valley for any period of time, you most likely have heard of BB Ingle, and most certainly have attended one of his monster parties. He has always had an affinity for bringing people together in celebration, and has taken his love for creating events into a career that has spanned over 30 years in the Coachella Valley.

BB was born and raised in Alabama. After going to college in his native state, he moved to Nashville, TN. He started working for a new ground breaking restaurant chain, TGI Friday’s. In the early 80s he became part of their bartending team that traveled throughout the country opening up new restaurants.

The team eventually came to the Coachella Valley in 1983 to open a Palm Desert location. They were scheduled to only be in the area for no longer than a month, but they became enamored by the inviting weather, golf courses and resort atmosphere. They decided to stay longer, eventually making the Coachella Valley their home and followed their dream to open up their own restaurant complete with a sports bar, dancing, live music and great food.

With determination and the help of investors, the groups dream became a reality and BB O’Brien’s was born. The popular nightspot had a healthy 12 year run, and closed in 1995.

The nightspot was a constant in desert nightlife, known for events such as their legendary St. Patrick’s Day parking lot party.  After they closed, BB decided to keep the party going by creating yearly events.

He started by hosting parties at local resorts, hotels and nightclubs…and eventually at the Palm Springs Convention Center. In recent years, BB’s parties have grown into major events, with anywhere from 1,000 to over 5,000 attendees. Parties such as his Annual Halloween Bash and New Year’s Eve Masquerade Ball are cemented in as yearly must attend Coachella Valley events. 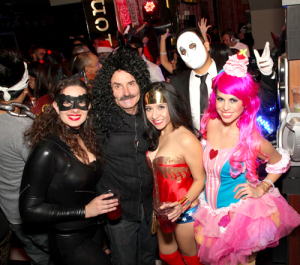 After 30 years the events have become legendary, entertaining desert party goers for decades and earning BB the Master of Events and Godfather of Parties title that he has today. He is also the two time winner of our own Coachella Valley Weekly’s “Promoter of the Year” award. “I try to host about six major parties a year,” said BB.

There have been many memorable party moments for BB as one could imagine. One of his favorites is when he gets to go on stage and sing Sweet Home Alabama with the band. Another party highlight was the time he sky-dived into a party at the El Dorado Polo club. There is no wonder why he is the master.

His passion for animals has led him to work closely with the Pet Rescue Center, donating a portion of his party proceeds to them.

His drive to create parties doesn’t seem to be slowing down for BB, “I’ve had a passion for social gatherings and creating situations for people to meet since I was a young boy,” said BB. “After 30 years of parties, we have all ages from 21 to 75, many of our original party goers’ children now attend. What makes me feel like all the hard work is worth it is when someone comes up to me and says ‘BB, thank you so much, if it wasn’t for your party I wouldn’t have met my soul mate.’ That is very rewarding and it has happened multiple times,” added BB. He said it made him seriously consider going into the wedding planning business.

On his down time, he enjoys golf, tennis, and of course college football; with his University of Alabama Crimson Tides close to his heart. In the summer, BB takes a respite from the desert heat and travels back to Alabama to visit family and attend Alabama football games.

Despite his party icon demeanor, BB is actually a private person. When asked what people would be surprised to know about him, he shared that he once was an 8th grade history teacher. Never would have guessed that one.

While BB tries to throw a party once every couple months, he’s thinking about re-inventing himself a bit in 2015. He has several new endeavors including opening a new dance club. “So many people keep asking me when I’m going to open another club, so I think 2015 might be the time to do it,” he shared, excited to be taking on another project.

BB Ingle has become part of the party tapestry here in the Coachella Valley.  He has created iconic parties and has done what he has loved all along, to bring people together in celebration. Here is to another 30 years BB!