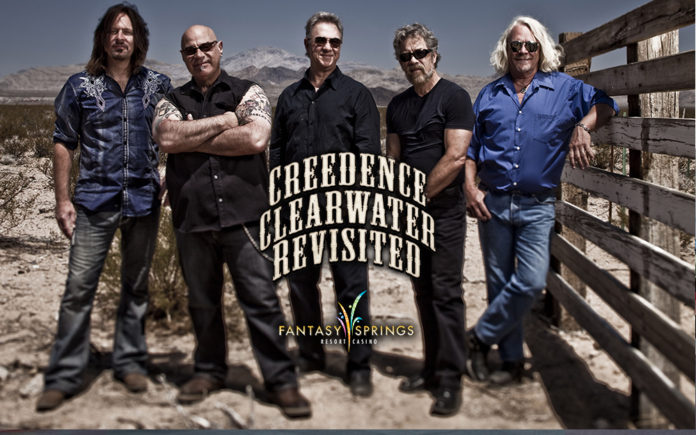 Since its formation, the reaction to Creedence Clearwater Revisited’s concerts has been astounding and driven in part by a generation of kids who, as Cosmo says, “weren’t even born when the music came out.” Having now toured North America, South America, Central America, New Zealand, Australia, Europe and Asia, knocking out audiences with astounding concerts jam packed with songs that are still a staple of radio and movie soundtracks, Creedence Clearwater Revisited has come a long way.

As fans who have experienced a Creedence Clearwater Revisited concert can attest, Stu and Cosmo found the right players. The newest touring member of the band is lead vocalist and rhythm guitarist Dan McGuinness. The purity, power and range of Dan’s soaring voice hits right to the heart. Lead guitarist Kurt Griffey has recorded and toured with top musicians including members of the Eagles, Foreigner, the Moody Blues, Lynyrd Skynryd, and Journey. Talented multi-instrumentalist Steve Gunner rounds out the group. As Cosmo puts it, “Gun provides live all the overdubs that were on the records. He plays keyboard, acoustic guitar, percussion, harmonica and sings the high harmonies.” Stu and Cosmo and their band Creedence Clearwater Revisited add a new chapter to their legacy with vibrant and exhilarating energy and pure American spirit.