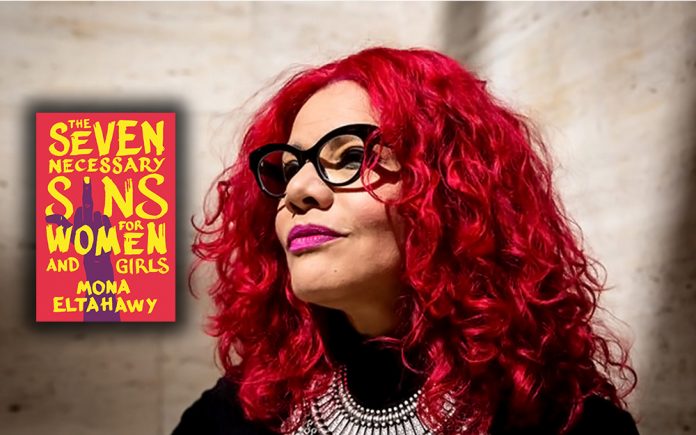 Patriarchy is a social system in which men hold primary power and predominate in roles of political leadership, moral authority (religion), social privilege and control of property.  The world is patriarchal, and women suffer every day as men dictate and construct reality.  In The Seven Necessary Sins for Women and Girls (Beacon Press, 202 pages), Mona Eltahawy challenges females to rise up and dismantle the oppressive rule of men.

Dear reader, if you are offended by the title of this review, then you need to read this book!

For now, the press is still free, and the publisher of CVW is a hard-working, glass-ceiling breaking, badass woman who actually gives a shit about people and the future of the world.

Author Eltahawy writes with outrage and urgency about the ways women and girls are treated around the globe and what needs to happen in order for females to live their lives out from under male domination and control.

Universally, women and girls are not to possess or exhibit these seven qualities.  Eltahawy believes that to survive and overcome worldwide patriarchy it is absolutely necessary for females to embrace and teach these qualities to better the lives of all women and girls around the planet!

Each “sin” is a chapter.  Although Eltahawy is strident about her manifesto, she develops her arguments with grace, dignity and — footnotes.  She is articulate and provides powerful examples, illustrations, and statistical data to make her points crystal clear.

There are so many horrific examples of patriarchal abuse.   The author is Muslim and at 15 was sexually abused while on hajj in Mecca even though she was covered up in traditional garb for women.   The crown prince of Saudi Arabia imprisoned women activist and shamed feminists by calling them whores, then a week later, in hopes to impress the world of their progressiveness, gave women the right to drive.  But today, Saudi women dare not get behind a wheel without fear of being killed!  Saudis consider feminists terrorists.  Women around the world have guardians who make decision for women who are literally prisoners in their own homes.

Lest you think this book is about women in other countries, Eltahawy comes on very strong about American women who continue to lose rights and power, and do nothing or very little to rise up and resist the patriarchal powers that dominate the U.S.  We are sadly complicit and in fact white American feminism is part of the problem! Forty-seven percent of white women voted for Trump, a widely known misogynist.

To dismantle the “Trifecta of Misogyny,” which according to the author is rooted in the “state, street, home” — people must defy, disobey and disrupt patriarchy in the state, street and home.  Men in power, in our streets and in our homes must be on alert that women intend to protest, and rise up against oppression.

“This is a moment for those who are not rich, white, or famous to be heard.  It is a moment in which we must have a reckoning with patriarchy and in which we recognize how normalized its crimes are, as well as a reckoning with how it intersects with other forms of oppression like racism, classism, ableism, homophobia, transphobia, and bigotry,” writes Eltahawy.

In the chapter about violence, the author suggests if men were raped and killed at the rate women are raped and killed, there would be an immediate response and even a revolution.  Eltahawy makes a strong point about the seriousness of actions and that violence can and does get noticed.

One of my favorite books of 2019 is Melinda Gates’ The Moment of Lift: How Empowering Women Changes the World.  The Seven Necessary Sins for Women and Girls is the perfect companion piece for a better understanding of the urgent need for women and girls to be treated with dignity, respect and equality.  Even more important is to understand why women and girls are not treated with dignity, respect and equality.  The revolution is not simply about equality; it is about the end of patriarchy!

This book is not about hating men.  It is about human rights, and loving women, and valuing their existence and contributions on this planet.