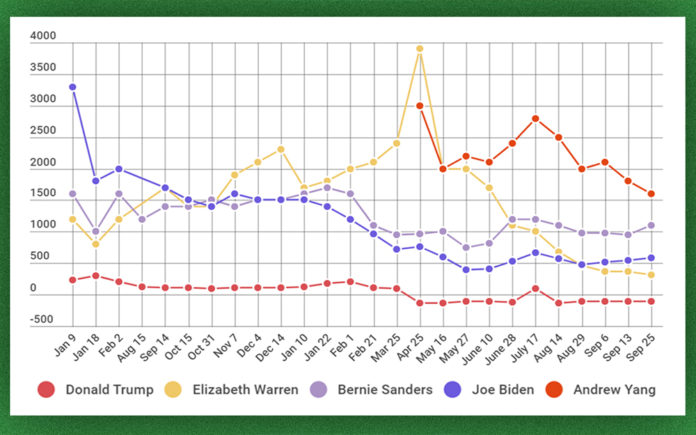 The field of candidates who have a legitimate chance to win the Democratic nomination to run against our Tweeter-In-Chief for President of the United States in 2020 is narrowing quickly.  If we use Trump’s unlikely ascent to the nomination from a seventeen-candidate GOP field four years ago, we can get some idea as to which of the dozens of candidates jockeying to run against President Trump have a legitimate chance of being their party’s nominee.

Rather than a review of polls, how did the offshore betting books handicap the field in 2015?  While it is illegal to bet on U.S. elections in the U.S., the U.K. does not have such restriction.  Back in July 2015, U.K. bookmaker, William Hill, had Donald Trump at 100:1 odds of becoming our 45th President.  By August, Trump’s unique style had improved his chances to 14:1 with Jeb! Bush leading at 3 ½ :1, “Little” Marco Rubio in second at 7:1 and Koch Brothers choice, Scott Walker, at 10:1.

In December 2015, just eleven months before the 2016 Election, “Crooked” Hillary was the prohibitive favorite at 8:11 meaning that she was thought to have a 58% chance of becoming our next President.  On the GOP side, “Little” Marco Rubio was now leading at 4 ½ :1 (18% chance) with The Donald hot on his heels at 5:1 (7%).  By then, the rest of the field was fading quickly across offshore sports books with “Lyin” Ted Cruz at 16:1 and The Bern at 20:1 as the closest rivals.

Following the announcement that the Democrats are seeking to impeach the President for his communications with the Ukraine, Orange 45 remains the odd-ons favorite at 1 2/10th:1 (up from 1 1/10th:1) meaning that he had a 45.5% of being reelected.

On the Democratic side, Senator Elizabeth “Pocahontas” Warren is the front-runner at 2 ¾ :1 for a 27% of winning with trends in her favor similar to Trump in 2015.  “Sleepy” Joe Biden has 7:1 odds (12.5% chance) and continues his fade as the sweetheart deals for his son Hunter Biden in the Ukraine and China gain scrutiny and tarnish his gaffe-prone image.

“Crazy” Bernie Sanders at 12:1 was losing steam to Warren prior to his heart attack.  Early indicators suggest that his health event may lead Sanders to transition to an Elder Statesmen status sooner than he and his supporters would like to admit.

Our Senator, Kamala Harris is a middle-tier candidate who has done nothing but fade (30:1 odds) since throwing her hat in the ring.  With her recent Jeb! Bush moment, it is unlikely that her already faltering campaign will rally.

One long shot candidate, Pete Buttigieg remains stable at 25:1 but has not shown any upward momentum over the last few months amongst the betting books.

With Sanders fade, Andrew Yang is surprisingly in the third position amongst Democrats at 15:1.

While betting lines figured out the GOP nominee by February 2016, trends suggested that Trump would win the nomination as soon as December 2015.   When it came to the head-to-head race between Clinton and Trump, betting lines had them wrong until 6:25pm PST election night.  The morning of the election, Clinton was an 88% favorite to beat Trump. You would have had to bet $700 to win $100 on Clinton while a $100 bet on Trump would win $475.

What all of this suggest is that Senator Elizabeth Warren is the most likely candidate to be the Democratic nominee to run against President Donald Trump and other third-party candidates next November.   Runs by the likes of Biden and Sanders are swan songs to their long and distinguished careers while Yang and Buttigieg are showing that there is a new generation of Democrat developing that could change the face of the 2024 election similar to what Obama did in 2012.