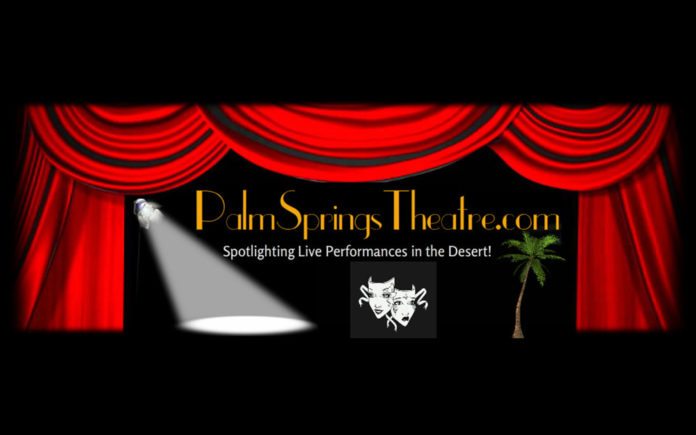 Famed Actress and Acting Teacher Stella Adler said, “the theatre is a spiritual and social x-ray of its time.” That statement could not hold more truth than it does right here in the desert. The List is long and extensive when it comes to impactful and insightful theatre and live stage performances in the Coachella Valley.  From film stars such as Greta Garbo, Frank Sinatra and Lucille Ball to Jessica Chastain and Gal Gadot, Palm Springs has been the destination spot for those seeking relaxation and entertainment for many decades.  So it’s no surprise that the desert hosts some of the best theatres in Southern California.  If you’ve ever wondered what type of live stage performances you can find in the Coachella Valley, you will appreciate the long and rich theatre history that has been apart of the community practically since its founding.

The Plaza Theatre, located in downtown Palm Springs, was a showcase theatre that opened it’s doors in December 1936 with the premier of Camille, based on the 1848 novel and 1852 play titled La Dame Auz Camelias, by author/playwright, Alexandre Dumas. The film stared Greta Garbo and Robert Taylor.  It was only the beginning of the world-class performers and entertainment that populated Palm Springs.  The Plaza Theatre went on to premier musicals such as My Fair Lady and Music Man, and has lent its stage to performers such as Jack Benny, Bob Hope and Frank Sinatra. Between 1991 and 2014, it was also the home of the celebrated music and dance review, The Fabulous Palm Springs Follies.

From 1936 until 1984 the Desert Circus was held every year, offering parades, games, circus acts and live stage performances.  The Desert Circus, was a celebrity populated event that the desert hosted in its long history of theatre.

The Hi Desert Playhouse, in Joshua Tree, has been serving the cultural needs of the surrounding communities since 1964.  Its main theatre was completed in 1980.  Confirming that artists and their art can be found in all corners of the desert.

The Palm Springs Annenberg Theatre and Art Museum, named in honor of the philanthropic Annenberg Family, who made their home at Sunnylands in Rancho Mirage, opened in 1975.  Lenore Annenberg herself was involved in its beautifully crafted interior design and decoration.  The Annenberg plays host to a variety of National and International stage performances.

In 1966 Pearl McCallum, a member of one of Palm Springs founding families,  bequeathed $250,000 for construction of a performing arts center. In 1988 The elegant 1,127 seat McCallum Theatre opened its doors.  Among its many productions, it has served as the resident performance space for numerous Broadway shows on tour.

1997 was the year that the Layne family submitted a winning proposal to the city of Palm Springs and won the bid for repurposing the historic Francis S. Stevens school and created The Palm Canyon Theatre. Known for their productions of Broadway musicals and classic plays, the Palm Canyon Theatre continues to present class act performances to the Coachella Valley.

In addition to the above-mentioned theatres, the past decade in the desert has proved to be very fruitful in the number of theatre companies that have been created and are greatly contributing to the quality of performing arts in the Coachella Valley.

In support of the local theatre community in the Coachella Valley, Dee Jae Cox and Michele Weiss, founders of The Los Angeles Women’s Theatre Project, which has been producing shows and events in the desert, as well as Los Angeles since 2007, is proud to announce www.palmspringstheatre.com, an on line community service Go-To Guide for local desert theatres.  The site is being launched May 15, 2018.  (The Print version will be published in November.)  www.palmspringstheatre.com is a new and inclusive website that will provide residents and visitors an easy way to locate listings and information on the Coachella Valley Theatres in one easy to view site.

Palm Springs has long been known as a destination spot for fun, sun and relaxation, however, with its history of performing arts, it is also the place to appreciate quality theatre.