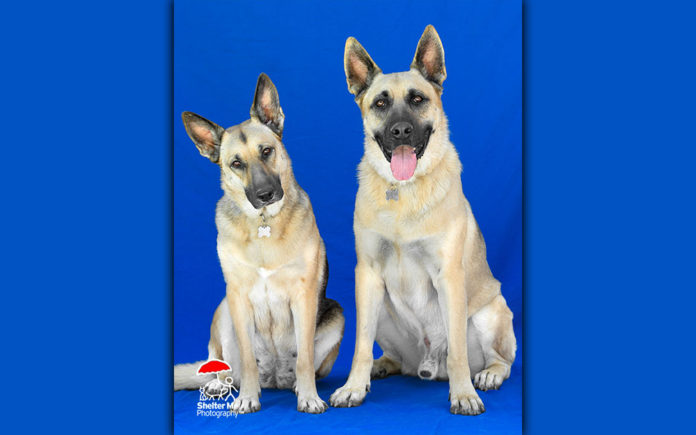 This is a “tail” of the love between two dogs, the foster parents who loved them, and the photograph that found them a home where they would always be together.  We don’t know Scooby and Ina’s history, but it is believed they were together in a previous home.

Ina and Scooby showed up almost magically one day outside the gate of Curtis Sweesy’s and Vanessa Ruggles’ home.  The couple foster for animal welfare organizations, specializing in Greyhounds and German Shepherds. They have a “wall of love” on their dining room wall, a collection of photographs displaying their many foster dogs.

How did these two shepherds know the right home to pick?  We will never know, and they can’t tell us.  The timing was perfect because Mahko, the couple’s previous foster dog, was adopted two days earlier and there was a “vacancy in the inn”.  A neighbor, not distinguishing these were different dogs, called to report, “Your dogs are sitting outside your gate!”  The dogs were abandoned and emaciated, and no owner could be located.  The 100 pound male, a German Shepherd/Great Dane mix, was named Scooby after the famous cartoon character.  The smaller female German Shepherd became “Ina” which means “little mama” in Lakota Sioux.  Ina had recently given birth to a litter of puppies.

There was an unbreakable bond between the pair.  When the dogs were separated at the veterinary clinic for spay and neuter, their reunion was a loud, joyous affair, even in their semi-sedated state.  These best friends tumbled and wrestled every day, their games playing like a well-choreographed ballet.  After playtime came nap time, and the two dogs slept with the tops of their heads touching.  Wherever Ina goes, Scooby is not far behind.

The decision was made to keep them together as a pair for adoption.  It’s always harder to find a home willing to take two dogs, particularly when their combined weight is 175 pounds.  We made flyers with their picture and promoted the dogs on Facebook.  Occasionally someone would call, but inevitably they were interested in just taking the smaller dog.  The months passed, the dogs thrived, but no home appeared.

Then master animal photographer, Nanette Martin, arrived in Palm Desert to teach a photography workshop.  Nanette founded Shelter-Me Photography, a nonprofit endeavor that promotes the adoption of shelter animals through beautiful photography.  Nanette describes her work, “As time passed, we began to realize our images were accomplishing something much bigger than just creating adoptions.  We were changing the way people perceive shelter animals.”  Her photographs connect through the animal’s eyes and freezes a moment that captures its soul.

Loving All Animals posted the new flyer around the Valley.  A phone call came quickly.  A friend of Donna and Phil Dempsey knew how sad the Pasadena couple was after losing the second of their two rescued German Shepherds.  This friend spotted the flyer on a Palm Springs’ Starbucks bulletin board.  When Donna saw the photo, she immediately connected with the look in Ina’s eyes and felt the spirit of her dog who passed.

The Dempseys soon headed out to the desert, and Donna describes their first meeting, “We love the dogs!  We’re empty nesters, and the dogs are a good fit.  We knew the moment we saw them.”  She had already changed the foam in their homemade dog beds, preparing for the newcomers.

The dogs now have a huge yard, and also enjoy a second home at the beach.  Scooby is the more gentle dog, and looks to Ina for direction.  Ina sets the pace and gives orders.  The pair enjoys outings on their new boat wearing lifejackets for safety.  Most important of all, they are together. The joy of pet ownership multiplies when you are lucky enough to have animals who love their humans AND each other.  Thanks to a photo, their love story continues.