Article and Photos By Scott Pam

Calling on their roots in heavy metal, grunge, hip-hop, punk and funk, Skitzo Attack has created their own niche in the realm of rock. With followers around the world and over 36 live performances under their belts at some of the larger venues in Southern California, they are getting the attention of those looking for a sound that is fresh and unique.

All three members of the band are self-taught, learning their respective instruments through experimentation and copying what they heard from their favorite musicians. Through each of their songs, elements of their favorite artists can be heard, from Eddie Vedder, Les Claypool to Incubus and Dime Bag Darrell.

Jonathan Sweetnam, the guitar player, lead vocalist, and primary songwriter, started listening to hip-hop and then discovered the melodic roots of rock. Sweetnam started out on drums and learned to play the guitar from YouTube videos. “I pretty much taught myself how to play guitar from the Internet. I found a bunch of singing lessons there too. I just started cranking away at that and singing in the shower,” he said.

Sweetnam song writing combines these various roots into powerful lyrics. “Wake Up”, the first song they wrote together as a band, blends the elements of hardcore metal, funk, punk, and hip hop with an incredibly fast drum beat.

Jay Bird, the band’s bassist, uses techniques and effects that many guitar players use and creates an original sound for the bass lines in the songs. “Jay Bird Scratch” showcases Jay’s style and technique in building his part of the song. He also recalls many of the records that his cousin played for him that gave him his roots in rock. Jay also gives credit to the Looney Tunes for “Hungarian Rhapsody”, a tune he learned as one of his first songs on classical guitar.

Jay and Jon met at The Warehouse, a record store that was in Palm Springs, when they were 17. They started playing together in a few different bands about ten years ago, including The Drops, before Skitzo Attack was formed.

“We started playing in the garage, and we had a drummer who didn’t want to play our first gig and his musical influence was more along the dubstep lines,” said Sweetnam. “He got stage fright and we were not on the same path musically anyway.” They had a few more drummers come through the door. “We were the Spinal Tap of drummers. Then God sent us Ethan.”

Ethan Olsen, the drummer, originally started playing guitar and remembers his first song on guitar, “Freefalling”, by Tom Petty. Olsen joined the band recently. “I got fired from a job and had nothing to do, so they asked me if I wanted to play drums, and I said, ‘Sure, why not?’” In each of the songs, Olsen’s drumming on the bass drum is super-fast, sounding like he is playing a double bass kit.

Three days after Olsen joined, the band had their first gig at The Red Barn, in July of 2012. Soon after, the bookings started coming in. Skitzo Attack has played at many of the local venues here in the desert including Schmidy’s Tavern, Dillon’s Roadhouse, Palm Canyon Roadhouse and multiple private parties. The have also performed at The House of Blues and seven times at the Whisky a Go Go in Los Angeles. 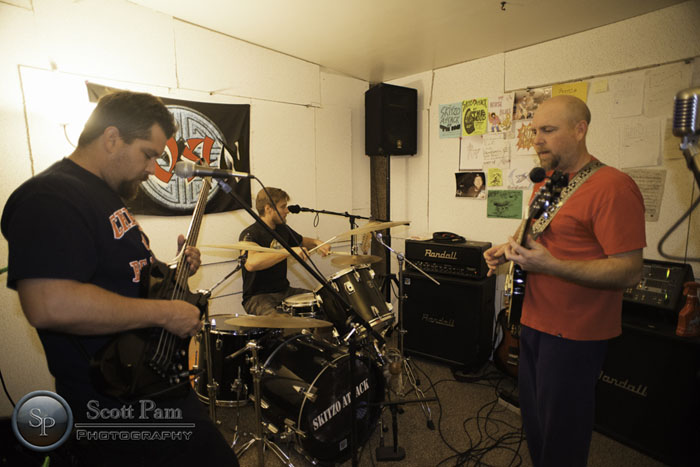