According to the ever-trustworthy Wikipedia, “goat throwing” was a practice celebrated by a festival held in Spain where a group of young men would throw a live goat from the top of a church based on local legend. A crowd below would then catch the falling goat with a canvas sheet. It’s since been banned but the legend states that a goat, which miraculously fed the poor with its milk, fell out of the tower, but landed safely. The band from Idyllwild, California, THROW THE GOAT, like the legend, is feeding its fans with its version of pasteurized pandemonium that continues to receive the appropriate praise and recognition. The triple threat ensemble that is THROW THE GOAT is making its own mythological saga through their inventive thrash/metal/punk sound.

WARNING: By reading this article, you are supporting the weaponization of underground music.

Coachella Valley Weekly recently sat down at Desert Music Headquarters with a 24 pack of PBR to speak with Michael Schnalzer (lead vocals & bass), Brian “Puke” Parnell (guitars & background vocals) & Troy Whitford (drums) to talk a little history and what THE GOAT TRIBE can expect this year.

CVW: You recently signed a distribution deal with COMBAT RECORDS.

PUKE: “Back in the day it was a thrash and punk label who had signed MEGADETH, CIRCLE JERKS, AGNOSTIC FRONT, THE ACCUSED, MURPHY’S LAW, SLAYER and all sorts of bands. The label went under and recently was purchased by David Ellefson, the bass player in MEGADETH. We happened to win an online contest.”

CVW: So tell us how the contest came about and how it felt when you found out you won?

PUKE: “On December 6th, 2017, Combat announced from their Facebook page that [I put a copy of the post below] they wanted people to tag “the greatest underground, unsigned hard rock and metal bands in the world” in their post. Next thing we know, we’re included in the top 100 bands for the voting rounds to begin. We ended up coming in 13th place of the top 25, with over 24,000 fan votes. We had no idea that we’d be picked by Dave Ellefson and Thom Hazaert to be the grand prize winners and land a deal with Combat Records.”

CVW: What does being signed by Combat mean for TTG?

PUKE: “Getting this deal with Combat means that people will start taking the TTG more seriously. Hopefully it means our new album, The Joke’s On Us, will reach more worldwide ears than we could have reached on our own.”

MICHAEL/TROY/PUKE (collectively): “In a lot of ways, Combat bands have been a huge influence on Throw The Goat. It’s an honor to be part of the new Combat family and we’re stoked to be one of the first bands to get picked up. Big things are coming. You ain’t seen nothin’ yet”

CVW: How did you two (Mike and Puke) meet?

MIKE: “We met in Idyllwild. I was born and raised up there so I’ve been in and out of there most of my adult life. We didn’t start TTG until about 2011.”

PUKE: “I moved there about 2005 and Mike didn’t even know I could play guitar.”

MIKE: “The first night I heard him play guitar was the first TTG practice. That night, we became a band. He talked about it a few times before and finally decided he didn’t actually play guitar and was just full of shit! He had all these kinds of stories and shit, but he would never actually play.”

CVW: How did you guys meet Troy?

MIKE: “Watching The Sweat Act. We were blown the fuck away!”

PUKE: “We looked at each other and said, “the fuckin’ drummer is fuckin’ rad!”

MIKE: “When the situation arose and we were in the market for a new drummer, Troy was one of the first we thought about.”

CVW: Were you always a three-piece and what are the benefits keeping it a trio?

MIKE: “The first two years we were a four-piece and then the guitar player stepped away. We decided to try it as a three-piece. For us it became a necessity thing. It’s one less person to deal with. For me, as a bass player, I sometimes hid behind a lot of moments. When Troy came into the band I had to get better. He only plays a single kick and I was used to hiding behind our last drummer and his double-kick. It forces us to be tighter, louder and more on-point. We’ve talked about bringing another guitar in. I’ve always been against it.”

PUKE: “Normally, I bring it up because I want somebody to hide behind.”

CVW: Have you had clashes within the band?

MIKE: “I fucking hate this guy man!” (pointing to Puke).

MIKE: “Troy just sits and watches us bicker. Nah, there’s a deep brotherhood between us. Especially with the last tour. If you can live in a van with two people for six weeks through three countries and not stab anybody, then you’re friends for life.”

CVW: What was your mode of transportation for the tour?

MIKE: “I bought the van from a guy named Fletch in Venice Beach. He got it from an old lady from Colorado. They were on a road trip and drove it out. He had only had it for three months so it was fuckin’ cherry! I go up and down the mountain with it constantly full of gear. Today there was a half foot of snow so we dug out the van drove through blizzard conditions, got some sunshine, then hit some rain.”

TROY: “During the tour we slept in the van only three times. There was one time in Akron, OH where I chose to sleep in the van and everyone else slept in a house.”

CVW: What do you think about when you see your catalog of music?

MIKE: “Our sound has developed a lot. It’s a journey. It’s an evolution. We went from a four-piece rock band to a heavy rock band to a three-piece thrash band to metal/punk/poppy because we like hooks. We play and write music we enjoy. It’s varied. It all sounds like TTG.”

PUKE: “A lot of people will take it for only face value. We’re able to dissect it a lot more.”

MIKE: “We worked really hard on the vocals for this album (The Joke’s On Us). We wanted to be brutal but have some hooks. Have some feeling and nuance to all of it. As much as I love all the scream bands, at a certain point people get turned off. Somebody told me not everybody can play an instrument but everyone has a voice. So everyone can sing along to your song and that’s how you hook people. They have to be able to sing along.”

PUKE: “It was a one after the other process for 32 days for the entire recording; writing some things in my studio in Idyllwild starting on Halloween 2017 until December 2nd.”

TROY: “We gave Mike enough time to listen to the music and put lyrics over it. There was no rush on that.”

CVW: You guys have a wicked sense of humor and your band name should be a precursor that you guys don’t take yourselves too seriously. 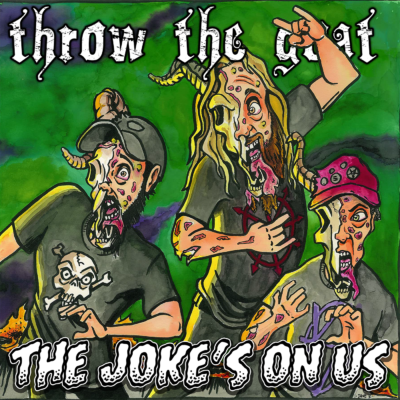 TROY: “The album name, The Joke’s On Us, is funny, but it’s not. Even the title song, the hook is: this is the punch line, laugh so you don’t cry, ‘cause the joke’s on us. The point is we’re all in this together no matter what’s going on or what my opinion might be. It’s not relevant to the situation at hand.”

CVW: Idyllwild is so quiet and peaceful, yet you guys are as hardcore as bands come.

TROY: “What’s awesome about Idyllwild is that the fans will go anywhere. When we played in Riverside there were a handful of people that came from Idyllwild to check us out. When we play The Hood, they pack the house. That’s amazing to me.”

PUKE: “Idyllwild is a place that has no cops, no gangs, you have a place where liberals and conservatives co-exist with mutual respect. You have a lot of responsible gun owners and all that sort of shit. You learn how to deal with your differences and you don’t really give a fuck if someone has an extreme point of view outside of your own. A lot of our fuckin’ problems would be solved if everybody just knew each other better. The reason we don’t have as much trouble up there is because everybody knows each other.”

MIKE: “I start every show with, ‘We’re THROW THE GOAT from Idyllwild, California!’ In all our travels we represent that big fuckin’ mountain up there and this whole valley below. I love repping this whole area. I think it’s fucking beautiful for one, and it feels good to me. California is L.A. You tell people you’re from a mountain town two hours east of L.A. and you’re in Akron, Ohio and they go, ‘what the fuck do you mean? Why are you here? Why aren’t you in L.A.?’”

CVW: When is the next TTG tour?

MIKE: “The Warped Tour show will be the last date of our West Coast tour.”

TROY: “We’ll be heading up to Vancouver, British Columbia and come back down for three and half weeks.”

MIKE: “Then we’re going to Costa Rica in May to open for AGENT ORANGE. A buddy of mine owns a bar out there. Latin America goes nuts for anything punk or metal. We also have BIG news coming on the next tour but I can’t share it.”

TROY: “It sucks to have such cool things lined up and not be able to say anything about them.”