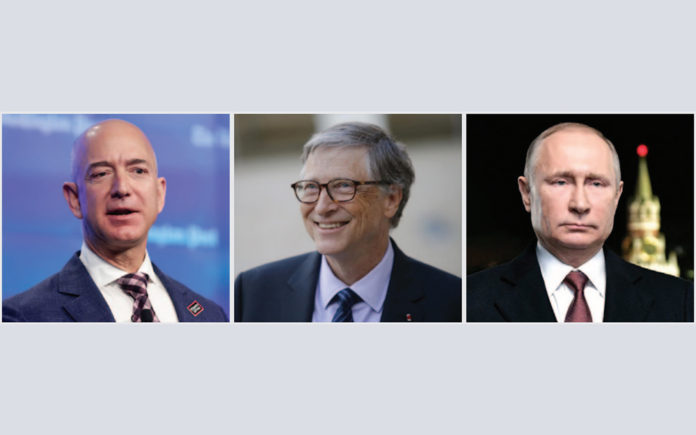 In a world where the nine wealthiest people are worth more than over half of the population of the planet, the discrepancy between the have and the have-nots has never been greater.

Oxfam found that the top 1% have more than the rest of us combined.  This wildly successful and usually overpaid group includes 1,500 billionaires with over one-third residing in the United States.

Even after a recent divorce, Forbes reports that the richest person in the world is Jeff Bezos at $131 billion.  Second on the list is Microsoft co-founder, Bill Gates at $97 billion.

Bill Browder of Hermitage Capital states that Russian leader Vladimir Putin is in fact the wealthiest person in the world despite his divorce as well.  Browder estimates that Putin is worth $200 billion.

As crazy as it may sound, one Chief Executive Officer made more in 2018 than the next sixty-five CEOs combined.

The highest paid banker on the list was Jamie Dimon at $30 million making him as the 22nd highest compensated executive in the U.S.  Dimon is CEO of JP Morgan Chase, the largest bank in the United States.

How about Netflix’ Reed Hastings?  He is 18th with salary plus bonus of $36 million, a 50% increase from last year.

Where were the Kardashians?  Only one placed near the top – Kylie Jenner who earned $167 million was third amongst celebrities.  Jenner turned 22 last month.

The top earning celebrity was also the top earning athlete for 2018.  Floyd Mayweather earned approximately $275 million in 2018 for his fight with UFCs’ Connor MacGregor.  MacGregor earned a ‘paltry’ $85 million.

Not far behind Mayweather was George Clooney at $239 million due to the sale of his Casamigos Tequila brand for an estimated $1 billion.

Getting back to executives, the CEO of the Burbank-based Walt Disney Company, Bob Iger came in seventh with earnings of $66 million.

The brash CEO of T-Mobile, John Legere who recently pulled off a merger with Sprint earned $67 million.

The highest paid woman executive was Safra Katz, the co-CEO of technology firm Oracle.  Katz and Mark Herd each earned $108 million and reside in California.

The third most highly paid executive is Nikesh Arora, CEO of the cyber-security firm, Palo Alto Networks at $125 million.  Originally from India but schooled in Boston, Arora now resides in California.

Even higher than Arora was the CEO of Discovery Communications, David Zaslav at $129 million.  Discovery owns numerous broadcast channels including Discovery, HGTV, the Food Network and TLC.

Who was the most highly compensated executive in 2018?

None other than the enigmatic Elon Musk, the CEO of Tesla Motors.  Musk, a brilliant character often compared to President Donald Trump due to his often unwise use of Twitter.  Musk’s received approximately $2.3 billion in stock options at Tesla.  Should Musk hit some seemingly impossible benchmarks, his net worth would surpass Vladimir Putin at more than $250 billion!

Something to consider as we think about some of the most highly compensated people in the world.  At what point is wealth more than a number on a piece of paper?  What might happen if CEOs took less and compensated their people better?

While these might sound like anti-capitalist statements, history has proven repeatedly that the greater inequities become, the less stable its political systems.  While recent shootings in Texas are most certainly due to mental issues by the perpetrators, at what point do we reflect on events and wonder if their behavior might be part of a larger, societal issue?

History should have taught us that systemic inequity has a way of causing people to act poorly.