With intense lyrics that pack a punch for the surrounding crowd and a consistent, determined disposition, rapper Zech B has launched himself into the music scene of the Coachella Valley in just a few short weeks. Being warmly and widely received at the CV Open Mic Competition at The Block Sports Bar & Grill in Cathedral City, Zech continues to ride his newfound popularity, performing each week and already landing himself in the upcoming Semi Finals on January 4th. As mature rhymes spout from this solid, well-rehearsed poet you would never guess that Zech is just seventeen years old and a high school senior. Compared regularly to Eminem, Zech feels a substantial sense of connection to the notorious rapper and looks to pave his own way into the music business and hoping to take his career to similar highs. I spoke with Zech about his inspirations and his goals, as he shares in savvy, calculated fashion, his plans to deliver his original music to a growing audience.

MJ: How did you get your start and what made you decide to break into the music scene locally and start performing live?

ZB: “Since 4th grade I was writing simple stories, and by 6th grade I had a stack of short stories. Starting high school I stopped writing again and started exploring different avenues. Sophomore year I started writing again and rapping. I’ve always loved rap ever since listening to Eminem’s “Without Me” and bopping my head even as a kid. The song preaching I wrote last year. I feel like my stuff has gotten better with time. I started kicking things into gear since last year. I did the CV Art Scene this summer, which was my first time performing. I always practice before the show, and have never felt more comfortable and alive than when I am performing. It is like my heaven. After my first performance at the CV Open Mic Competition some girl came up to me and said ‘that performance blew me away and gave me chills.’ That was the first time someone walked up to me and told me that and it felt amazing. It was real and I felt like I could keep doing it.”

MJ: Is your family supportive of your music?

ZB: “I don’t think that my mom takes my music as seriously as I take it. She thinks it’s just a hobby, but I am trying to go all the way with it.”

MJ: Are you currently working on an album or an EP to release to fans? What can listeners expect to hear from you?

ZB: “I don’t want to do an EP because I feel like it’s too short and I’ve got a lot to say. I want to do a 13. I feel like 13 songs would really flow and connect to that Antisocial theme since 13 is an unlucky number. My songs range in ideas. My song “Preaching” is about substance abuse. I see kids my age struggle with it and even my family struggle with substance abuse and so I pull from that. I don’t rap about women or clubs, you know things that you hear on the radio. Those thoughts don’t come into my mind and I don’t care about those things. Rap is very important to me and I don’t want to use my art form to make trash that I don’t care about.”

“I’m pretty introverted and reclusive. I am pretty quiet and not a stand out person. But I get on stage and I can be a different person. I am a senior and even seniors are like ‘who are you?’ but I just wanna be me. That’s why my album will be called Antisocial– because it’s the period in my life where I am like that, but I have things to say. That song I performed last week was pretty personal, but I told myself go for it. Go for the gusto… and the response was overwhelming.”

MJ: Do you create your own beats and do you have a home studio?

ZB: “I do have a simple setup at my house, a microphone and a computer. I’ve started to try and make my own beats and I’ve started to acquire new equipment. Currently I am finding beats online and asking permission. Since its free content it’s not as big of a deal. I also have been talking to local people about beats, but have yet to really work through that avenue. Moving forward, I intend to go hard in the paint with it and start getting money and working hard.”

MJ: Who are some of your influences and artists that you look up to?

ZB: “Eminem is my lyrical father. I believe that I am his unknown child. Also, Mos Def, Rakim, Ice Cube, Tyler the Creator, Logic, some Kanye West, some Jay-Z, some Kendrick Lamar. I like to be a big boiling pot of influences, including some grunge music like Nirvana, or old jazz like Billie Holiday, Louis Armstrong, or Frank Sinatra. But Eminem is a really big ingredient in my pot.”

MJ: What are your goals for the future? 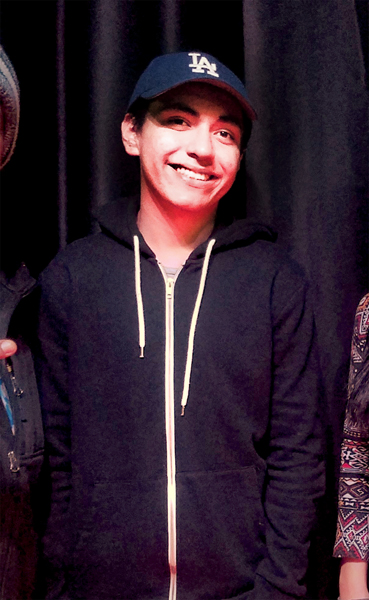 ZB: “I got some goals long term- I want to move out of here and go to L.A. and Orange County area. I know that the Rap scene and the hip hop community is immense. I want to go there and move my way through the ranks. My songs are not all rap but have a rap form. Like it’s a rap song, but it’s also sentimental and serious. It’s a song that has mass appeal. I’ll do anything, I just want to get my name out there.”

“Immediate goals- I just finished an interview on a poetry show for KCOD Coachella FM, which will be out soon. I have 3 songs set for the CV Open Mic Competition Semi Finals January 4th and hopefully Grand Finals January 11th. All originals, I am not a big cover person. Not my style.”