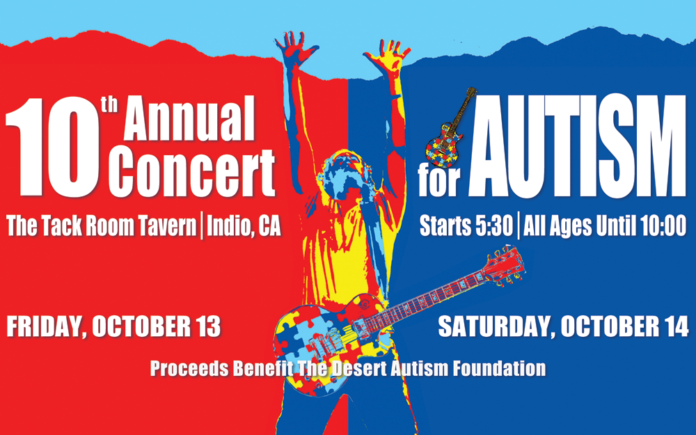 Eight years ago, Josh and Linda Lemke Heinz met and got together in what is not your average love story. Their two sons, both severely autistic, were classmates in a school for children with disabilities and became friends. While this doesn’t sound extraordinary, both boys were not very verbal and (as is common in severely autistic children) don’t make many connections with others, not even close family members. But Harrison and Christopher, Josh’s and Linda’s sons respectively, clicked almost immediately and became great friends. Both parents, divorced from their first spouses, were delighted to see this. The rest, as they say, is history. In their case, it’s not only history, but the beginning of a beautiful collaboration that spans parenthood, music, and working for a cause they both believe strongly in. On Friday and Saturday night, October 13 and 14, join Josh and Linda at their event, the 10th Annual Concert for Autism at The Tack Room Tavern in Indio.

Together for eight years and married for three, the Heinz family consists of Josh and his 17-year old son Harrison; Linda and her two daughters and one son, 18-year old Gillian, 15-year old Christopher, and 12-year old Katy; and their son together, 4-year old Jack. Josh works at Hohmann Fine Art and Linda has taught music privately for over twenty years. Linda, who had already begun teaching kids with special needs, received a grant to continue to do so through Lumpy’s Foundation (https://www.lumpysfoundation.org/ and now called Desert Autism Foundation) after she wrote a letter to thank its founder, Randy Corti. She wrote to him to thank him for his event, Lumpy’s Scramble, which raises funds that allows parents of special needs children to buy deeply discounted therapy. This wonderful organization negotiates rates with some of the local occupational, music, speech and social therapists. Says Linda,“It’s been special to be able to do this. I love to teach and I’ve been doing it for so long, but without this grant, I wouldn’t have been able to. I love teaching autistic kids how to focus and get excited about something through music. At a few of the benefits in the past, one or more of my students have gone to perform! For my students, music is fun and therapeutic.”

Aside from working full-time and planning this yearly benefit concert, Linda and Josh play in two bands together. Blasting Echo is a rock band, for which Josh provides lead vocals and guitar and Linda plays keyboard and sings backing vocals. 5th Town they describe as a “rock/pop/folk” band that Linda co-fronts with Chelsea Sugarbritches and Josh plays guitar. Says Josh of being in two bands, on top of all their other commitments, “It’s chaotic for us to be in these bands.” “But necessary!” Linda chimes in. Josh concurs. They rehearse in their house and Linda’s son Christopher loves it. Most of the time, he sits on the sofa in the living room and listens to his parents play, and to their delight, sometimes even jumps and dances around. Their young son Jack also has a love for music and often wants to come in to test the mics out and bang on the drums. Both Blasting Echo and 5th Town will be playing at the Concert for Autism on October 13.

This 2-night concert features over 26 performers, both bands and acoustic artists, on two separate stages. Each band will play on the big stage for 35 minutes, then an acoustic artist plays for 20 minutes on the other stage. In the 5 remaining minutes of each hour, there are announcements and raffle prizes. While the bands are playing, tables will have raffle and exciting silent auction items – including hotel stays, date night packages, and much more. The whole night is geared toward entertaining with local bands and local artists while raising money. All ages are welcomed and encouraged until 10 pm and both nights begin at 5:30 pm. The Coachella Valley Autism Society will have a booth set up with activities for kids, such as face painting and a photo booth. This event is a great resource for new families that are coming across autism and whose children have just been diagnosed. They will have the chance to meet other parents and find out what’s available to their kids. The Tack Room will have food and beverages for purchase. There is a suggested donation of $10 at door, which goes to the Desert Autism Foundation. Of the event, Josh said, “Every year we’ve been lucky that we’re a little more successful than the last one. Ultimately as long as we raise any funds it’s a win – but I’d like to surpass last year’s total. It’s a way for the music community to give back.” The couple credits much of the event’s success to the dedicated volunteers, mentioning by name Greg Little, Marcus (Johnny) Sugarbritches, and Jeff Mazur, whose help they say they couldn’t do without. 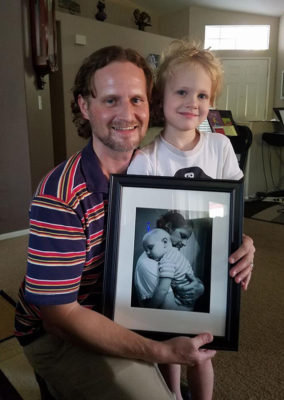 According to the CDC, 1 in every 68 children in America is identified as having autism spectrum disorder. But, Linda points out that the figure hasn’t been updated in several years and is believed, even in just a few short years, to be much higher. Linda relayed that she has a friend who has been a teacher for years and is eager to have a conversation with her about how much it’s changed and how her classes used to be back in the 80s. She knows she’s seen the rise, as almost every classroom seems to have a child on the spectrum now. “What is going on and why? I believe something is going on and we need to know what it is in order to prevent it. That’s why we do what we do with the concert, said Linda. “The Desert Autism Foundation provides such important services. Our boys have aged out of these services, but we know how important early intervention is and need to make sure these services are available and affordable to those who need them.”

She explained that a lot of children who have very mild autism deal with social issues as they get older, specifically depression and anxiety about the knowledge that they are different from others their age. Aside from the children who are on the autism spectrum, another concern is the effect autism can have on their siblings, not to mention marriages. Josh and Linda are well aware that for how high divorce rates are, they are even higher for couples with special needs children. Linda feels that the forgotten heroes in this equation are the siblings. Her daughters have been through a lot with their brother and she tries to make sure she spends a lot of time with them and makes sure they keep communication open. In the case of her son Christopher, her daughters never asked her why he was the way he was, as his autism came to a head before he turned 2. He had language, a huge vocabulary, and excellent fine motor skills, but by the time he was two that changed. He lost all of his language and started screaming all the time, making it nearly impossible to take him anywhere. Linda scrambled to find answers and didn’t yet know what autism was. She got him help as soon as she could. “You have to have early intervention. It’s a lot of work, but my daughters never asked me what’s wrong with my son. It’s just ‘that’s Christopher.’ It’s hard for them too because it’s difficult living with someone who just melts down.” 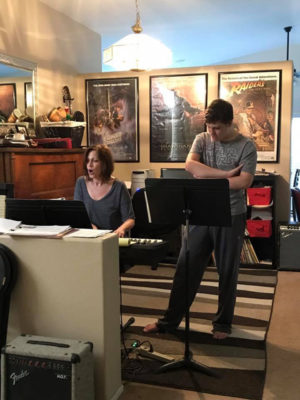 She couldn’t take him to the grocery store or many other places in public. Chrisopther was five when he finally started answering yes and no questions. In one telling incident, they were on their way home from his school and Linda was given advice not to take the same route every day or her son would likely come unglued when she went a different route. One day, she went a different way home and as predicted, her son melted down. She pulled over and asked him if he was mad. No. Was he sad? No. Scared? Yes. “It was a lightbulb moment for me. I realized the reason he likes his routine is to make him feel safe and calm. He gets very afraid when things change. When you see a child melting down, stop to think that for whatever reason, this is a child who is terrified. Many autistic kids are highly sensitive visually and auditorily and something as simple as going to the grocery store can cause sensory overload. They can’t tune that out and they’re scared. I guess what I’m saying is have some compassion. People would be kinder if they understood.”

For Linda and Josh, the 10th Annual Concert for Autism is their way of raising awareness to bring about that understanding to others, whether their family is touched by it or not. Your $10 suggested donation entrance fee, as well as the silent auction and raffles, raises critical funds for the Desert Autism Foundation. Rock out with the Heinz family on October 13 and 14 at this worthy event that is not only for a good cause, but also for a good time. For more information and to make donations: http://concertforautism.com/ The 10th Annual Concert for Autism is at the Tack Room Tavern 81800 51st Ave, Indio, CA 92201.