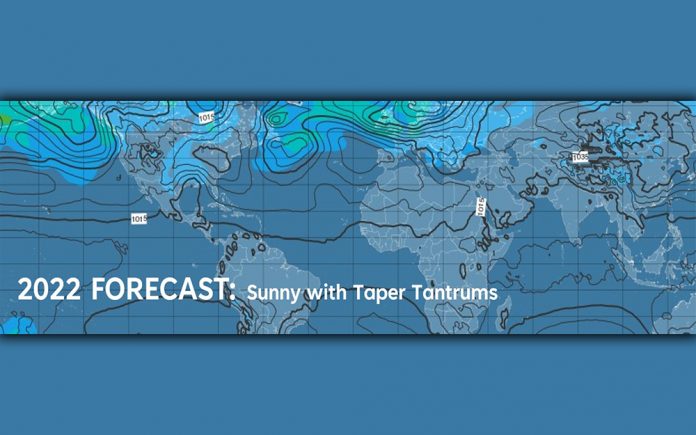 According to CNBC, the consensus estimate for stock market returns on Wall Street for 2022 is 7.75%.  Forecasts are varied with Goldman Sachs and JPMorgan believing that equities will increase by more than 10% in 2022, Bank of America/Merrill Lynch believing that markets will be flat and Morgan Stanley forecasting a 4% decline.

With such a wide disparity, let’s take a look at a few key indicators.

According to FactSet, corporate earnings are expected to grow by 10% in 2022.  This may not match 2021’s 45% rate but is much better than what we typically see. According to the IMF, growth globally is expected to be 6% with richer and more developed countries doing better than poorer countries. With large segments of the global economy still limited by COVID, we should see stronger demand for goods and services in 2022 as the world emerges from COVID. As a reminder, vaccines created by China, Japan and Russia have not been as effective as those made by Pfizer and Moderna.

As the pandemic transitions to an endemic stage, expect choppy markets as we adjust to a changing economic landscape.  Central Banks led by our Federal Reserve have largely driven markets since March, 2020.

The market can be expected to throw a few taper tantrums as the punch bowl of free money is taken away.  While the Federal Reserve may increase rates by 0.5% in 2021, what we really need to watch is the speed that the Fed uses in reducing its balance sheet by.  During COVID, the Fed bought $7 trillion in debt from the market which flooded markets with liquidity.  By ending its purchases and resuming sales, the Fed has a powerful way to keep the economy from getting over heated. The general feeling is that the Fed will use the threat of higher bond sales to keep valuations of assets from going too high.

The continued impact of COVID around the world and the beginning of the withdrawal of government economic support is likely to cause Central Banks and governments around the world to move more slowly than most expect on interest rates.  This means that we can expect negative real rates into 2023.  Negative real rates are a rarity and only happened during the energy crisis of the mid-70s, 2012 and the last two years.  We should expect prices and inflation to continue at a higher level than we have seen over the last few decades.  Those of us with memories that date back to the early 1980s remember home loan rate peaks at over 18% in 1981 and one-month CDs of 20%.  While we are unlikely to see such high CD or mortgage loans rates, we need to be prepared for a decade where interest rates generally climb higher.

While we can expect a generally good year for the economy, we need to stay aware of the threats that could change our economic forecast quickly.

One sign that times should be good in 2022 is that the rate difference between high risk and low risk borrowers is at some of the lowest differentials in history.  When the rate premium paid by the riskiest borrowers begins going up, we may have an early indicator of looming problems.

One clear risk is that there is no historical precedent for total global debt of $226 trillion.  Due to this, you can bet that Central Bankers will be careful when raising interest rates as these same governments are the world’s largest borrowers.  A misstep here has the potential to turn modest rate increases into spiraling inflation and economic destruction.  As we saw last year, the Federal Reserve and other Central Bankers will do what it takes to maintain financial stability.

For now, let’s focus on getting through this latest round of COVID as quickly and with the least harm as is possible.