Films that were allegedly made but never distributed for public consumption are part of Hollywood’s enduring lore. With the upcoming Palm Springs International Short Film Festival and the promised AM/FM screenings, my dreams have been filled with ult    ra vivid short movies that I’ve heard or and want to see. They may or may not actually exist. The best moves are the ones we anticipate, imagine or dream. After all, the most vivid screen is in your head.

I’m sharing them here because, for my own sanity, I need to purge them from my mind — set them free. Who knows, maybe they will materialize. If you stumble across them somewher, please contact me.

A DAY AT THE BEACH 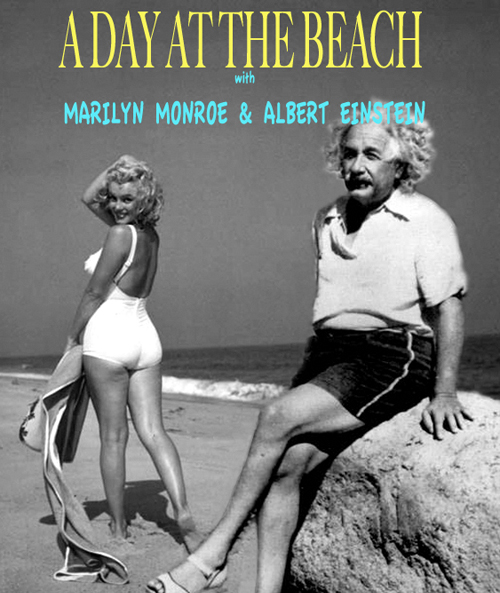 A three-minute short, probably shot on 16mm. It looks like Malibu in the mid 1950s. This sweet and rather poignant, professionally shot “home movie” was allegedly found among Einstein’s personal effects. They were in a shoebox, with a batch of uncashed checks, at his Princeton office after his death. There’s no sound, but there’s no mistaking these two iconic figures were quite taken with each other and were loving and gentle friends. There’s a moment where Albert writes his famous equation for energy equaling mass times the speed of light squared in the sand and Marilyn draws a heart around it. She nods and smiles as he says something when the waves wash it away. It looks like Marilyn wipes away tears as she turns her head away from him. It is unknown who shot this very intimate moment of two minds meeting in time and space. 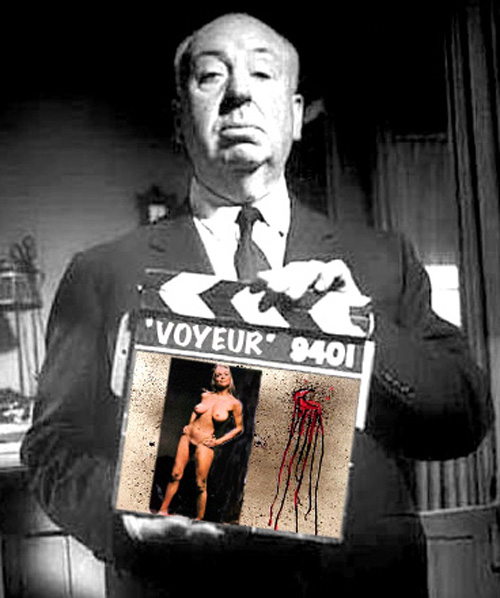 While Alfred Hitchcock was shooting PSYCHO, a second unit was making a secret grind-house thriller, tentatively titled VOYEUR. It was ostensibly about Janet Leigh’s stand-in who is stalked by a maniacal peeping tom. Sadly, Grace Mandy, the actress playing the ambitious stand-in is accidentally killed on camera when a prop knife malfunctions. Hitch destroyed the negative and reportedly went into a deep depression. However, one crudely edited work print remained in an editor’s work bay. This film has the raw, stylistic power of “Citizen Kane” and says more about the seductive allure of Hollywood during the late 50s and the movie business in general than anything I’ve seen since “Sunset Boulevard.” I’m assuming this film was meant as a kind of sequel to follow “Psycho.” It would have been a wallop of a one-two punch for Hitch.

Today, it’s difficult to know just how much in this film is authentic, but there’s no denying the poignant, irony in the shadowy images of a pretty young stand-in who’s dying to be as famous as the big glamorous star who pretends to die in a seedy motel’s shower. I understand the original title was “The Stand In” and then “Voyeur.” But someone has inserted “HITCHCOCKED!” over the opening credits.

There is a visceral, gut-wrenching blow at the final fade-out when the last images of a dying actress dissolve to black and the off-screen applause of the crew — who still assume she’s merely acting — continues. The name of the actress has been erased from the records.

A few days ago, after an extensive internet search, I was relieved to meet the star of the film, now a youthful 78. Mandalya Garcia is the Grace Mandy of the film. She lives alone near the Patton Museum and operates an abused animal shelter behind her isolated desert home near the museum. 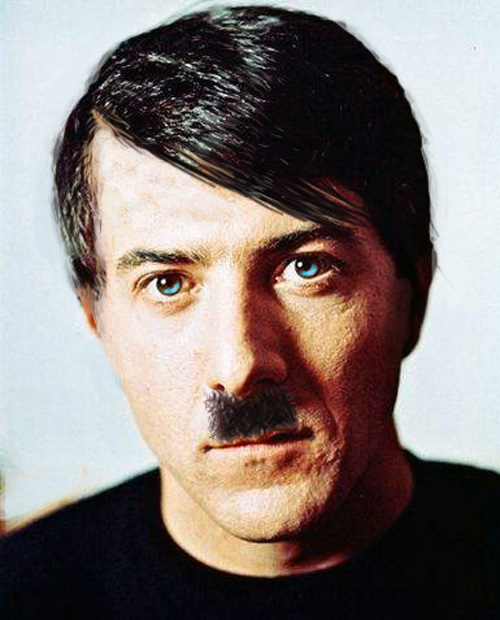 When Dustin Hoffman was about 20 and studying at the Pasadena Playhouse, he and an unknown friend made a short, 8mm home movie. In it, Dustin plays young Adolf Hitler during the brief interval between the time Adolf was kicked out of art school in Vienna and when he went off to fight for Germany in WW I.

The no budget film was shot on stolen locations in Glendale, Pasadena, Burbank and Catalina. The scenes are of Adolf joining an occult book reading club and creating a rucus, his chance lunch and food fight with Sigmund Freud in Vienna, a botched understudy role as Judas for the Oberammergau Passion play and his trip to England to visit and mooch off his brother Alois who managed a failing Blackpool beach hotel.

The entire soundtrack is Hoffman doing a voice-over narrative in a lisping German accent that ranges from weepy to crazy rants. But it is all gibberish and totally incoherent. A few title cards, like in silent movies, tell us all we need to know.

Hilarious and extremely disturbing. We see the glimmers of a man becoming a monster. (And a brilliant young man becoming an actor!) Even worse, we love and pity the Fuhrer-to-be. Hoffman makes him one of us.

For a long time in his early professional career, Hoffman said to anyone who would listen, he wanted to portray Hitler on screen.

None of these films exist. That’s because the best moves are the ones that you anticipate, imagine or dream. The most vivid screen is the one that’s in your head. 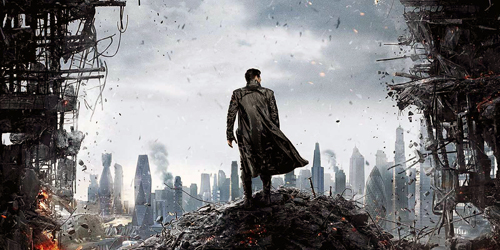 Director J.J. Abrams follows up his origin Trek movie with an action thriller that continues the story and tone of his 2009 hit. Big action, some humor and lots of talk when the Enterprise crew is called home, only to find an unstoppable terror that leaves out world in a state of chaos and panic. There are personal scores to resolve as Kirk wages a deadly mind game in which love, friendship and sacrifice are part of the mix. Benedict Cumberbatch is a terrific antagonist who makes it real. 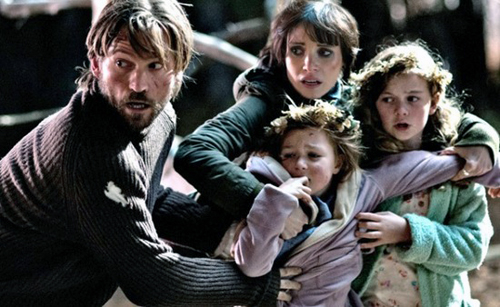 Guillermo del Toro presents a supernatural thriller that has a great look but tells a story that is derivative and unnecessarily complicated. Jessica Chastain is fine as a rocker who inherits the two nieces of her incapacitated boyfriend. But are the little girls, who have been living on their own in the wild for five years, really all that alone? Some nice ghostly jolts in a first half that soon loses its power.

Also available: Arnold Schwarzenegger attempts a big-screen come back in THE LAST MAN STANDING. Director Kim Jee-Woon delivers some nice action set pieces but the overall tone with its tongue-in-cheek asides makes it a sad enterprise for all but the most undemanding viewers.