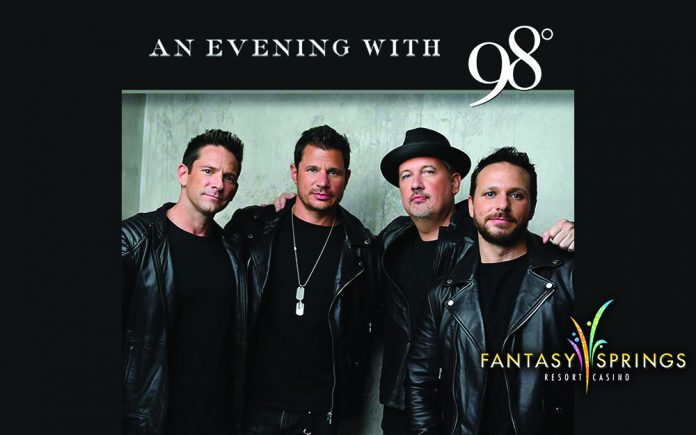 When 98º joined the boy band craze and burst onto the scene in the late 90s, it was to the delight of seemingly every girl in America. Their re-emergence, after a decade-long hiatus, is welcomed by their plethora of fans who always hoped they’d be back. You can see them this Saturday at 8 pm at Fantasy Springs Resort Casino, at their An Evening with 98º show. With 10 million records sold and 6 Top-20 singles, 98º dominated the air waves with their smooth R&B/pop sound in the early 00s. But what did they get up to while the band was taking a break?

Jeff Timmons, the founder of the group, went on to try his hand at a solo career with albums Whisper that Way and Emotional High. He found his niche as a Chippendale’s MC and performer. He also created the “Men of the Strip” revue, which was documented in the 2014 docusoap for the E! Network. The Men of the Strip troupe landed a contract and regular performances at the Tropicana Las Vegas and also tours in the United States and Canada. The Men of the Strip performers sing and dance in shows, which sometimes includes performing with Timmons who moonlights at times as MC.

Justin Jeffre, originally urged to join the band by his friend Nick Lachey, took a political path in his absence from the band. He ran for mayor of Cincinnati in 2005 and joined the Occupy Cincinnati protest in 2011.

Drew Lachey never gave up performing, going on to win Season 2 of Dancing with the Stars in 2006 and hosting the 2006 Miss USA Pageant. He acted in Broadway productions of Rent, Hairspray, and Monty Python’s Spamalot.

Nick Lachey has stayed high-profile moving forward with a successful solo career, marriage to television personality Vanessa Minnillo, and acting roles on tv shows such as Charmed and One Tree Hill, among many others.

See 98º perform your favorite hits this Saturday, January 25, at 8 pm. To purchase your tickets (which include $10 of free slot play), click on this link: https://www.fantasyspringsresort.com/an-evening-with-98-degrees/

Fantasy Springs Resort Casino is located at 84-245 Indio Springs Pkwy, Indio, CA 92203 and offers a variety of delicious dining options for before and after the show.